2018 Senate Recruitment: Too Early to Talk About It?

Challengers in tight races typically take their time to announce

With the 2018 midterm elections about 18 months away, attention is shifting to the battle for the Senate — and who could emerge as potential challengers.

But history shows that prospective contenders have a few more months before they typically announce their candidacies.

Senate Republicans bear the brunt of the recruitment challenge this election cycle, since they are looking for challengers for 23 Democratic incumbents, and two independents who caucus with the Democrats. The GOP has an opportunity to expand its majority, since 10 of those Democrats are up for re-election in states that President Donald Trump won in November.

With some higher-profile Republican lawmakers passing on a Senate run, Democrats (and some GOP strategists, in recent media reports) say the party is struggling to recruit credible challengers. But Republicans counter that they still have time, and are in discussions with formidable recruits.

The timing of a candidate’s campaign announcement is just one of several factors in a campaign. And if recent history is any indication, Senate challengers would typically announce their campaigns between one and five months from now, or anytime from June to October.

Over the last six Senate election cycles, challengers in competitive races have typically announced earlier than those challenging safe incumbents. That earlier announcement allows them more time for fundraising, defining their campaigns, and heading off primary challenges. 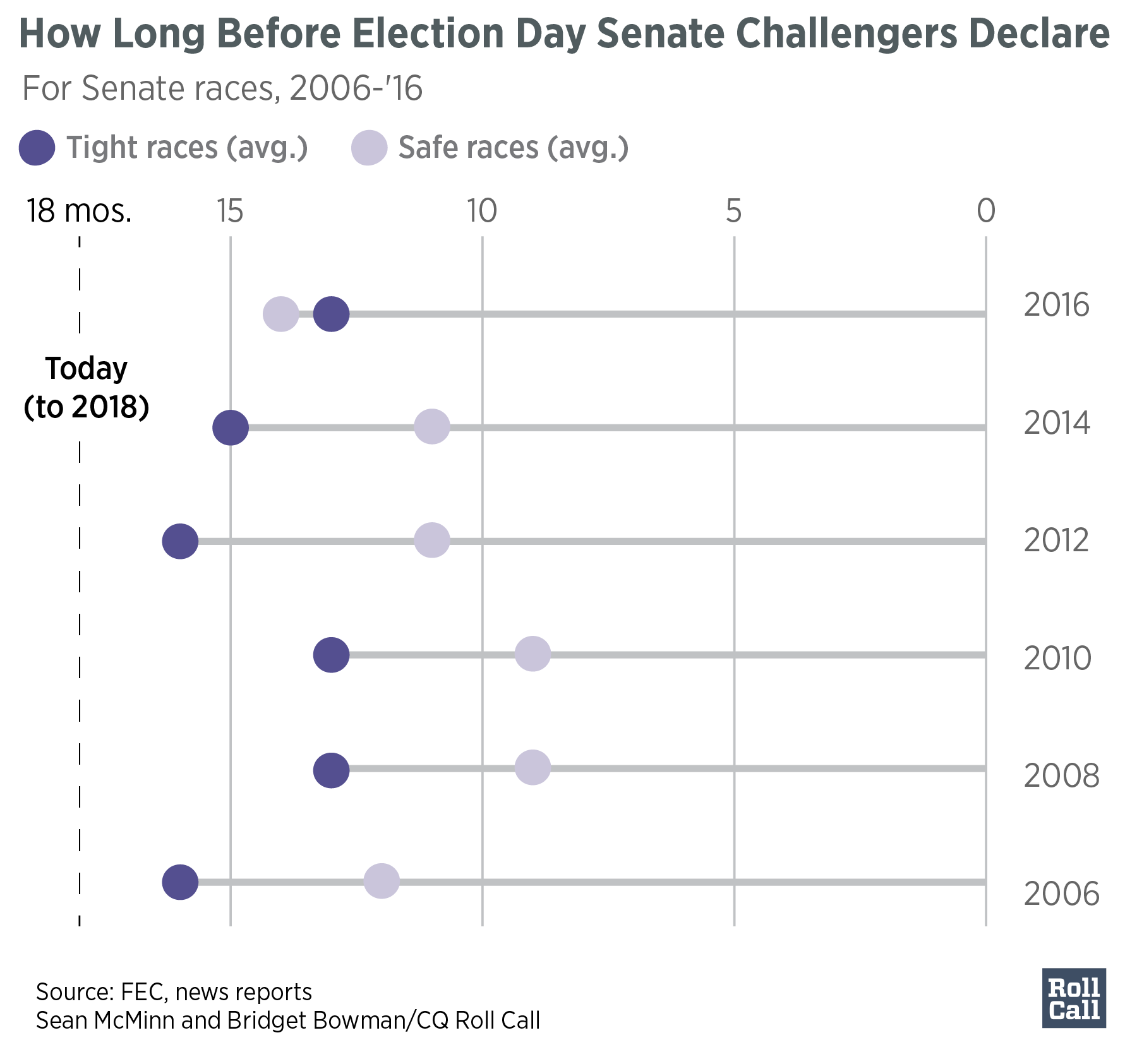 For more competitive races, candidates challenging senators or running in an open seat typically announce their campaigns an average of 12 to 16 months out from Election Day, according to campaign announcement data compiled by Roll Call. Those candidates challenging incumbents in solidly Democratic or Republican seats typically announce between nine to 14 months ahead of Election Day.

In this analysis, competitive seats from the past six cycles were deemed as any race not rated “safe” or “solid,” by Inside Elections with Nathan L. Gonzales just ahead of the election.

The timing of an announcement is also dictated by each state’s primary filing deadline, as well as fundraising deadlines. For example, candidates tend to announce at the beginning of a fundraising quarter to allow more time to raise money before they need to file a fundraising report.

When looking at the primary filing deadline, candidates in competitive races also tended to announce earlier. In the last six cycles, from 2006 to 2016, challengers in those races announced their campaigns between seven and nine months ahead of their state’s filing deadline. Challengers taking on safe incumbents announced between three to six months before the filing deadline on average.

Announcing a campaign early, of course, doesn’t always spell success. In each cycle, the timing of campaign announcements for challengers who unseated incumbent senators varied.

Take 2014, when Republicans took back the Senate. Cory Gardner announced just one month before Colorado’s filing deadline, and eight months before Election Day, that he would challenge Democratic Sen. Mark Udall.

But Thom Tillis, who was the speaker of the North Carolina state House, announced his run for Senate nine months before the primary filing deadline, and 17 months before Election Day. Tillis, a Republican, went on to defeat Democratic incumbent Sen. Kay Hagan.

Timing for successful challengers has also varied on the Democratic side, particularly in 2006, when Democrats retook the Senate. Jim Webb announced he would challenge Virginia GOP Sen. George Allen just two months before the state’s primary filing deadline, and nine months before Election Day. But Bob Casey announced his campaign in Pennsylvania one year before the primary filing deadline, and 20 months before Election Day. Casey defeated incumbent GOP Sen. Rick Santorum.

In 2018, 12 Senate races are rated as not solid wins for either party. There is also the added factor that no senators have announced yet that they are retiring, so all of the races involve challenging incumbent lawmakers.

Democrats have their own recruitment tasks. They are looking to field candidates against the two more vulnerable GOP senators: Dean Heller of Nevada and Jeff Flake of Arizona.

“We’re in discussions with lots of good candidates,” said Sen. Chris Van Hollen, who chairs the Democratic Senatorial Campaign Committee. The Maryland Democrat said it did appear that Republicans were having trouble recruiting contenders.

“Clearly, they’ve been struggling in a lot of places, but it is early,” Van Hollen said.

Republicans have seen some of their higher-profile prospects decline to challenge Democratic senators. GOP House members in Indiana, Pennsylvania, Ohio, and Wisconsin have passed on Senate runs. Other House lawmakers in Missouri, Pennsylvania, Indiana, and North Dakota are still weighing bids, and have yet to announce their campaigns.

Tillis, who is now vice chairman for the Senate GOP’s campaign arm, said the party has a “good pipeline” of potential candidates who are exploring runs, and the timing depends on each state, the prospective candidates, and fundraising considerations.

Sen. Roger Wicker, a former National Republican Senatorial Committee chairman, said his preference was for candidates to announce their campaigns sooner rather than later to head off primary challenges.

“I do prefer that someone, ideally, get in the race earlier, start building consensus,” the Mississippi Republican said. “We call that clearing the field.”

In the meantime, some primary dynamics have started to emerge. In Indiana, for example, GOP Reps. Todd Rokita and Luke Messer are considering challenging Democratic Sen. Joe Donnelly. The pair are already trading barbs in the media over campaign-style attacks. Competitive primaries could also emerge in states like Arizona and Nevada, where Democrats are recruiting challengers.

“Tough primaries are always a factor in every election cycle,” he said. “If you anticipate a competitive primary, then you take fundraising seriously sooner, you tend to get good experience in debates, you get an opportunity to shake down your ground game. So to me it’s not all bad.”

Another X-factor this year is Trump, whose unpredictability can cause some headaches for GOP candidates. But Tillis said Trump isn’t a major factor in recruitment.

“I wouldn’t discount that some of the unknown could influence some of their decisions, but I don’t think [it does] for the most part,” the North Carolina senator said. “I think the more fundamental issue, I should say, is that in an off-year election, the party that runs the White House tends not to fare well, outside of a national crisis.”

“They all know,” Tillis said when asked if potential candidates were voicing concerns about the midterm environment. “That’s how I say it: Be prepared for the reality of historical trends.”

Some Democrats also suggest that an agenda including the unpopular GOP health care bill is preventing some potential contenders from running. DSCC spokesman David Bergstein said candidates are “refusing to run and answer for their party’s failed agenda — like a health care bill that will spike costs for older Americans and strip away coverage for individuals with preexisting conditions.”

One potential candidate said he was not going to let the prospect of losing in a tough midterm year affect his decision.

“The reason to run should always overshadow the reason not to run,” said GOP Rep. Mike Kelly, who is considering running for Casey’s Pennsylvania Senate seat. “If you’re afraid of losing, don’t run.”

Kelly said he would probably make a decision on a Senate run around the August recess, since, as a member of the Ways and Means Committee, he was focused on legislating.

A Senate run, he said, is “high on the list but not as high as tax reform.”