On Facebook, Talk Is on Race, Christianity and Trump

Trump was the most discussed candidate on Facebook leading up to Super Tuesday, according to the social media site. (Tom Williams/CQ Roll Call) 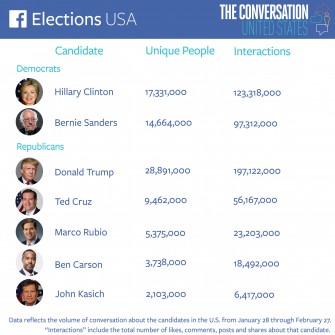 The topic of race differs from data leading up to Super Tuesday, which showed Christianity was the most discussed topic on Facebook nationally. Christianity moved down to second place once March 1 began. This might reflect the flap over Trump's refusal to disavow the Ku Klux Klan and its former leader, David Duke, who endorsed the businessman late last week. Also on Super Tuesday, guns were the third most discussed, then immigration, Benghazi, education, Islam and Muslims, #MakeDonaldDrumpfAgain, crime & criminal justice and jobs.

According to data from the social media site on engagement from Jan. 28 through Feb. 27, Alabama, Arkansas, Georgia, Oklahoma, Tennessee, Texas and Virginia were the Super Tuesday states specifically discussing Christianity the most on Facebook.

In Alaska, border security was the top issue discussed and in Colorado, Massachusetts, Minnesota and Virginia, it was Wall Street and financial regulation that was the most discussed issue.

On the national level during this period of time, economy and jobs came in second in terms of discussion on Facebook. Following behind were racism and discrimination, immigration and taxes.

Both nationally and in the Super Tuesday states, Trump was the most discussed candidate on Facebook during this time. He led in both users discussing him and users interacting with him.

In terms of discussions and interactions across the board, former Secretary of State Hillary Clinton, a Democrat, was in second place, followed by Sens. Bernard Sanders, I-Vt., Ted Cruz, R-Texas and in fifth place, Marco Rubio, R-Fla.

Ben Carson was ahead of Ohio Republican Gov. John Kasich nationally and in every other Super Tuesday state besides Massachusetts, where Kasich came in sixth place.