Once upon a time, Alexis Flake, daughter of Arizona Republican Sen. Jeff Flake, met a somewhat mysterious stranger under the dazzling lights of Nationals Park. 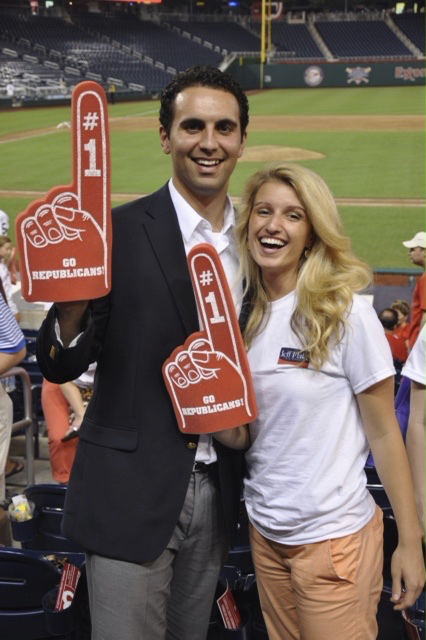 Four years, and three Democrat victories in a row  later, Alexis’s home team stands poised to grow by one pending the arrival of a little one later this summer. The fairy tale romance took wing in 2012.

Alexis, who was at the time, honing her journalistic skills at “Good Morning America,” said an acquaintance suggested she get together with Jason Arias, a Brigham Young University alumnus mastering messaging at Policy Impact Communications.

“We got set up by a friend who knew we were both interning for the summer in D.C.,” she said of the fortuitous timing.

According to Alexis, Jason called her ahead of time — while she happened to be attending a White House picnic with another prospective suitor — to iron out the logistics of getting together the following evening.

The pair agreed to meet at the Roll Call Congressional Baseball Game.

Although she said she was immediately struck by how handsome he turned out to be, Alexis noted that her mother was even more taken with Jason than she was.

“She talked to Jason the whole time. I barely got a word in,” Alexis said.

The veteran lawmaker concurred. “I don’t know if it was love at first sight for my daughter. But my wife, who sat on his other side during the game, told Alexis afterwards, ‘You gotta pursue this guy,’” the senator told HOH. “She was completely all-in.”

Once the final out was called, the pair retreated to a post-game reception — at which point Alexis watched Jason get all nervous around an apparent man-crush.

“Jason was starstruck getting a hot dog next to Ron Paul,” she recounted.

They’ve been pretty much connected at the hip ever since.

Arias proposed atop the Capitol Dome in early 2013; they married a few months later.

While attending Thursday’s 54th Annual Roll Call Congressional Baseball Game is certainly a top priority, Alexis Flake Arias explained that the couple also has a family wedding to attend. Jason’s cousin is planning to tie the knot on June 13 in Alexandria, Va.

Alexis said she is looking forward to again strolling along the Georgetown waterfront, spotting dragonflies (“We don’t have those out here,” the Arizonan stated.) and catching up with old friends.

“The family that set us up lives in Maryland, so we’ll be staying with them,” Alexis said. “They enjoy seeing the fruits of their labor.”