Lawmaker/novelist Steve Israel wants to bring other pols into the publishing fold. And he’s already got around a dozen takers who have signed on to attend Wednesday’s inaugural meeting of the Congressional Writers Caucus. 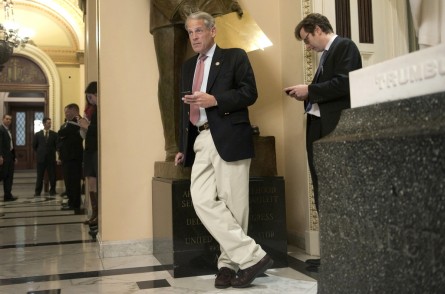 The New York Democrat — who famously pounded out his critically acclaimed political satire on his iPhone — is excited, staff told HOH, about swapping stories with other “born communicators” on a semi-regular basis.

“Rep. Israel wanted to provide members with a forum to enhance their writing skills and learn from other authors and publishers about the industry,” an Israel aide said of the vision for the group, adding that Israel is most interested in talking to other budding authors about what they’re working on. To date, the eight-term lawmaker has not, staff said, ever participated in a writing group. Instead, he tends to hone his craft as time permits. “He writes every morning,” Team Israel said of the boss’s commitment to creative expression.

In addition to hearing from Simon & Schuster execs (Israel’s publisher), attendees at the caucus kick-off can look forward to shop talk from accomplished author Nelson DeMille .

Those interested in becoming bona fide wordsmiths will need to find their way over to the Jefferson Building of the Library of Congress for the early morning rap session. Or hold their tongues until Israel manages to get the band back together.

“His plan is to have it every other month to six weeks, schedule permitting,” an Israel aide said of the anticipated timetable for future meetings.

Related: Steve Israel: Coming Soon to Cable TV Random Awesome Passages From Rep. Steve Israel’s ‘The Global War on Morris’ Steve Israel: The F. Scott Fitzgerald of Congress? The 114th: CQ Roll Call's Guide to the New Congress Get breaking news alerts and more from Roll Call in your inbox or on your iPhone.