Activists sense a sea change in momentum around the issue

PHILADELPHIA — Every couple of minutes, it seems to Daniel Hernandez, someone stops him to ask about gun violence.

Hernandez is a former intern for Rep. Gabrielle Giffords. He helped save the Arizona Democrat's life after she was shot in the head at a constituent event in 2011.

Hernandez, who is now running for a seat in the Arizona state house, said it's a positive sign that voters are demanding to know a candidate's position on gun control.

"For us, just even having folks talking about gun violence is a big step forward," Hernandez

In 2012, Giffords opened the Democratic National Convention by reciting the Pledge of Allegiance. Aside from highlighting the former congresswoman, Hernandez said there wasn't much talk about gun violence at that convention.

[ Complete Coverage of the Democratic National Convention as it Happens ]

But this year, Democrats at the national convention say they are trying to keep up the momentum on combating gun violence. This comes after a slate of recent shooting incidents, and protests by congressional Democrats to force a vote on gun control measures that captured the nation's attention.

Democrats staged a day-long sit-in  on the House floor in June, after Connecticut Sen. Christopher S. Murphy led a nearly 15-hour filibuster in the Senate shortly before leaving the nation's capital for summer.

After the sit-in and the filibuster, Democrats stressed the importance of keeping up momentum, and they're hoping the convention can help them do that.

"This historically has been an issue that both parties have run away from," said Connecticut Rep. Elizabeth Esty. "For the first time, Hillary Clinton and the Democratic Party in its platform are making this issue, about needing to do better as a country to take common sense steps to help prevent gun violence.”

[ Key Moments in the House Sit-In on Guns ]

Esty's Connecticut district includes Newtown, the site of the tragic shooting in 2012 at Sandy Hook Elementary School, where 20 students and six adult staff members were killed.

On a hot Tuesday afternoon, Esty stood in Logan Square in downtown Philadelphia with roughly 200 other activists to call for action on gun violence prevention.

"Not one more!" the crowd chanted. Giffords' group, Americans for Responsible Solutions, hosted the rally, which was one of several events throughout the convention focused on ending gun violence.

A part of the convention program will be devoted to the issue on Wednesday night, when Murphy will speak along with Erica Smegielski, whose mother Dawn was the principal at Sandy Hook and was killed during the shooting.

Massachusetts Rep. Katherine M. Clark, who helped organize the House sit-in, will discuss gun violence during an appearance with House Democratic women on Tuesday night. Anton Moore, who runs a community group in the host city, will also address the convention Tuesday.

“One of the things I’m going to talk about is getting a phone call late at night saying [a] kid was murdered in the streets of Philadelphia,” Moore said. 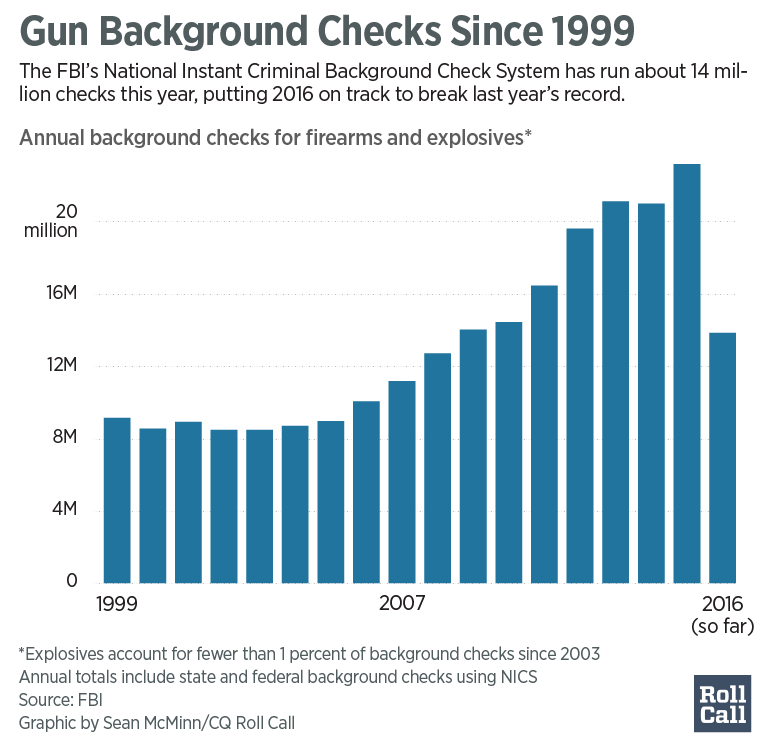 Members of Congress will also be discussing the topic at panel discussions and delegation breakfasts throughout the week. Murphy coincidentally spoke Monday to the Florida delegation, after a shooting outside a nightclub in Fort Meyers, Florida, earlier that day that killed two and injured more than a dozen.

"It is a reminder of this daily epidemic that plagues this country," Murphy said.

Emphasizing gun violence at the convention signals that the issue will be key to Clinton's general election campaign against Republican presidential nominee Donald Trump, Murphy said.

"There were a lot of people that said Hillary Clinton is going to talk about guns in the primary and drop it like a hot potato for the general," Murphy said. "That hasn't happened because she's personally committed to the issue and it's a winning issue in the general election."

Clinton has been vocal about gun violence on the campaign trail.

And her running mate, Virginia Sen. Tim Kaine is also a proponent of gun control. In his first speech as the presumptive vice presidential nominee , he called the 2007 mass shooting at Virginia Tech "the worst day of my life." Kaine was the state's governor at the time of the incident when a gunman killed 32 people on the university campus.

Shootings in recent weeks have brought gun violence to the forefront, beginning with a terrorist attack in June at a gay nightclub in Orlando, Florida, which cost the lives of 49 people in the largest mass shooting in modern U.S. history.

Shootings of black men at the hands of police, and retaliatory shootings of police officers, have shaken the country, launching dialogues about racial tensions, policing and access to automatic weapons.

A recent Pew Research Center poll showed gun violence remains a top issue for voters, with 72 percent ranking it as "very important." Overall, it was the fifth most important issue, behind the economy, terrorism, foreign policy, and health care.

Murphy has sought to capitalize on this momentum by making gun violence a campaign trail issue, as attention turns away from Congress and toward the November presidential election. The senator has launched his own campaign fund to support congressional candidates who support gun control measures.

On Tuesday, Murphy joined Americans for Responsible Solutions at a briefing on gun issues in the 2016 election. The group is involved in a handful of competitive Senate races, providing research and messaging tools to their preferred candidates.

Pete Ambler, the group's executive director, said they are looking at getting involved in other Senate, House and state government races this election season. The group is also launching a "Vocal Majority" tour to hold events throughout the country.

Arizona's Hernandez said it's an issue he hears about often in his campaign for state representative. It has come up in each of his five debates so far.

Hernandez said one factor that could help the movement forward is the new involvement of the lesbian, gay, bisexual and transgender community following the Orlando shooting.

During a brief phone interview before an LGBT caucus meeting at the convention, he described people in the meeting wearing "Disarm Hate" shirts and buttons for the Brady Campaign, which advocates gun control measures.

Hernandez said the gun violence prevention movement could learn from the gay rights movement, which focused on action at the state level in response to federal inaction.

"I think this year is going to be different,” said Esty, the Newtown congresswoman. She said that as the topic gets discussed in campaigns, it is no longer a "third rail" for candidates.

“I think we’re going to see this being used as a distinguishing, defining issue in a few races," Esty said. "And we’ll know whether the tide has turned when we see what happens.”