Posted May 22, 2017 2:05 PM
Todd Ruger
@toddruger
View from the gallery: Lots of cross-party talk — and cross-contamination — at Senate trial Impeachment trial, like much of Trump’s presidency, is unprecedented View from the gallery: Senators’ personal habits on full display as week 2 begins

The Supreme Court ruled Monday that North Carolina unconstitutionally used race to draw two congressional districts with substantial increases of black voters, in a voting rights case that could influence how states can consider race when redistricting.

The justices found that a lower court correctly decided that state lawmakers used race as the predominant factor in significantly altering the 1st and 12th congressional districts, held by Democratic Reps. G.K. Butterfield and Alma Adams, respectively, both African-Americans.

The court was unanimous on the 1st District held by Butterfield, but split 5-3 on the 12th District over whether the challengers had done enough to prove their case.

Some election law experts said the ruling would not bring sweeping change to fights over redistricting. But Rick Hasen, a law professor at the University of California, Irvine who follows election law litigation, called it a “major victory” for voting rights advocates because it means racial gerrymandering challenges will be an effective tool to go after partisan gerrymanders in Southern states. 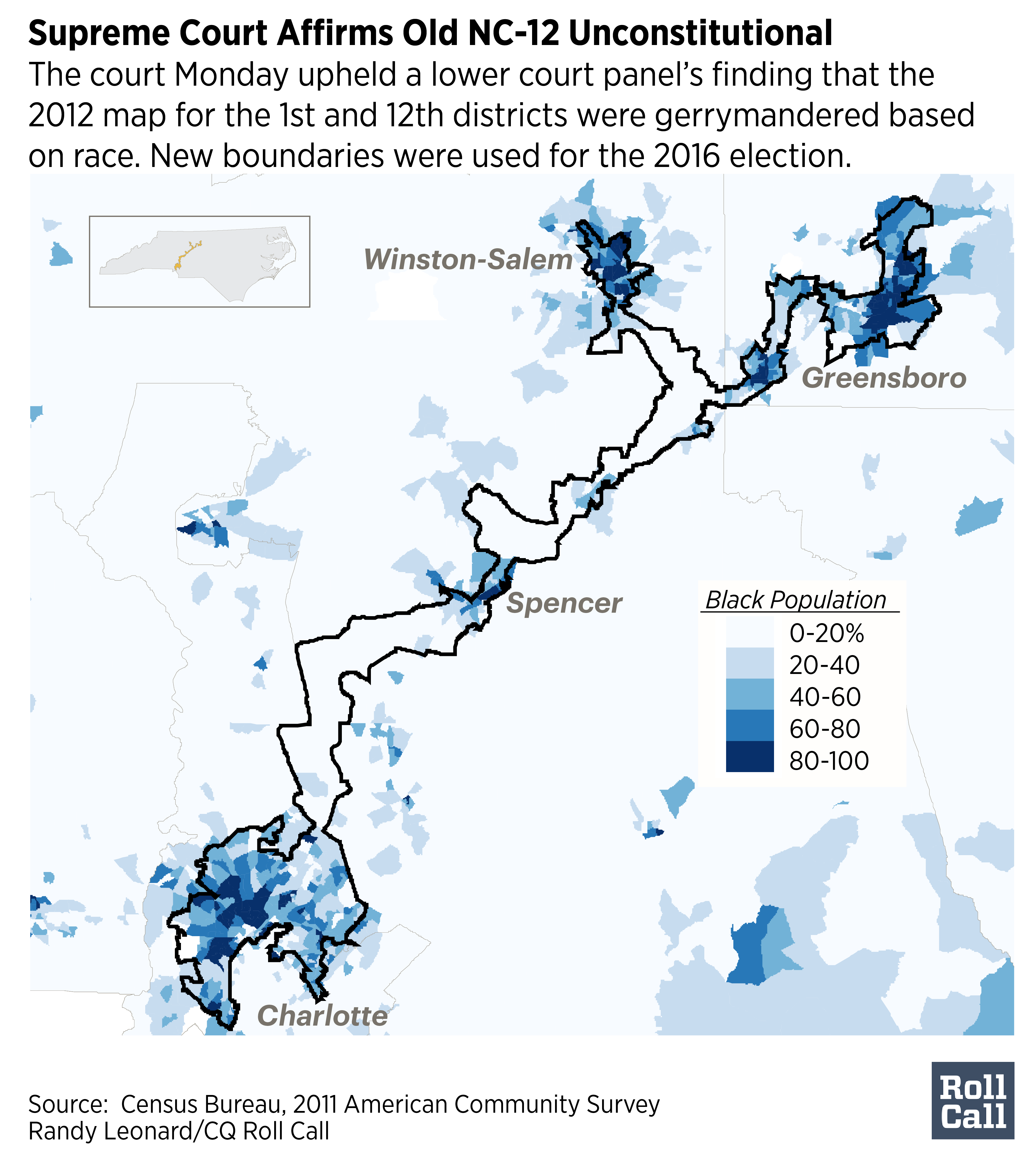 “This will lead to many more successful racial gerrymandering cases in the American South and elsewhere, and allow these cases to substitute for (so far unsuccessful) partisan gerrymandering claims involving some of these districts,” Hasen wrote on his blog. 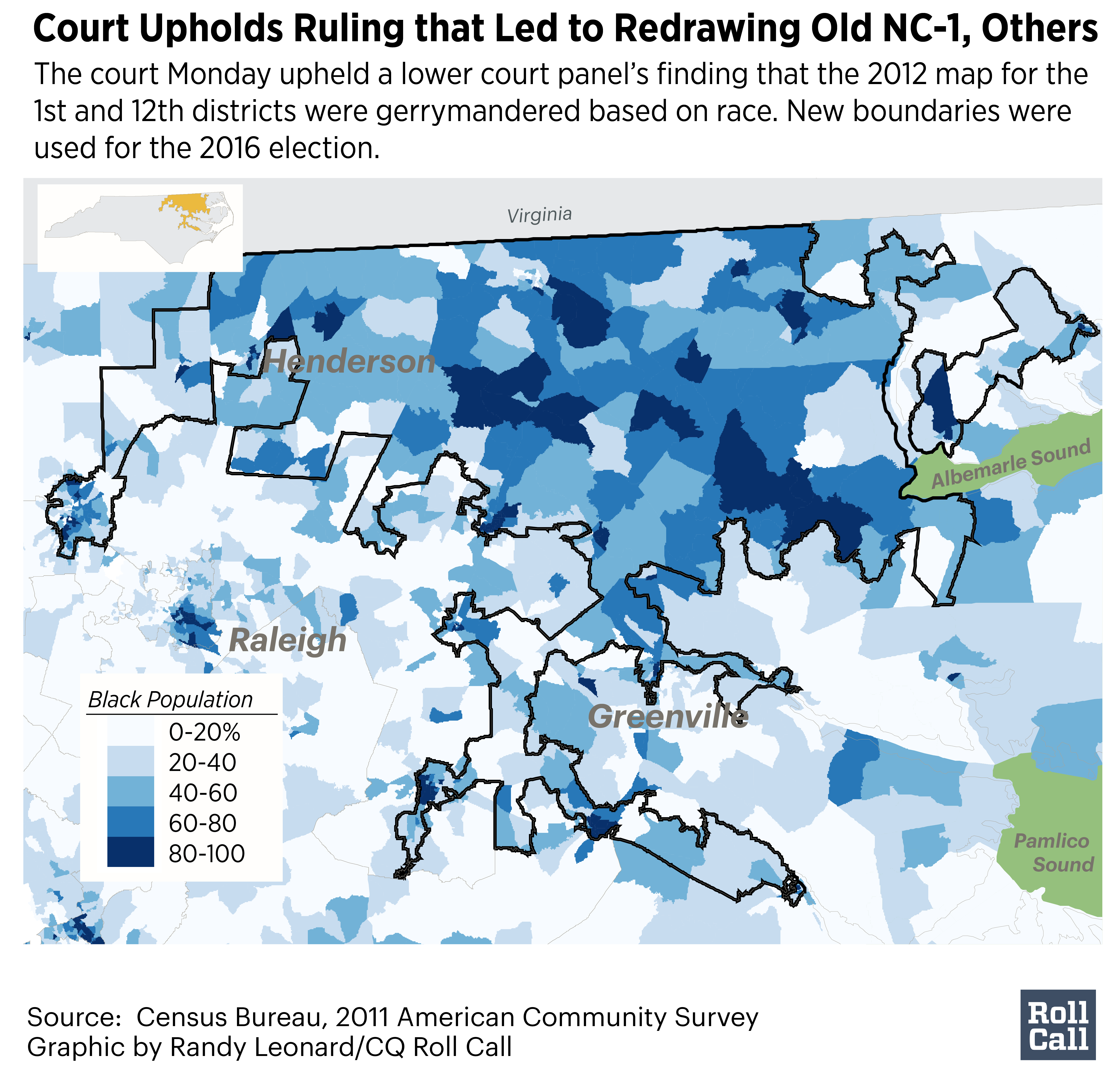 North Carolina officials said they redrew the 12th District not for racial motivations but for political reasons, and they altered the 1st District to comply with a 1965 Voting Rights Act requirement to put enough minority voters in districts so minority voters can elect lawmakers of their choice.

That political versus racial motivation gets harder to discern because states are allowed to draw district boundaries for political reasons, and there is a high correlation between minority voters and Democratic votes.

In the 12th District, Justice Elena Kagan wrote for the majority that the Supreme Court was reviewing the district court’s decision only for a legal mistake and ran through the evidence — concluding that the justices are far from having a firm conviction that the district court erred.

“The evidence offered at trial, including live witness testimony subject to credibility determinations, adequately supports the conclusion that race, not politics, accounted for the district’s reconfiguration,” Kagan wrote. “Maybe we would have evaluated the testimony differently had we presided over the trial; or then again, maybe we would not have.”

But a dissent written by Justice Samuel A. Alito Jr. views the evidence differently and criticizes the majority for “junking” a Supreme Court precedent in another voting rights case — over the same 12th District — that requires challengers draw a map.

Such a map would have to show that a state would serve the legislature’s political objective without the same racial effects, effectively separating political reasons from racial reasons.

“A precedent of this Court should not be treated like a disposable household item — say, a paper plate or napkin — to be used once and then tossed in the trash,” Alito wrote. “But that is what the Court does today” with the 12th District ruling.

Alito’s dissent, joined by Chief Justice John G. Roberts Jr. and Justice Anthony M. Kennedy, states that the 12th District’s borders “are readily explained by political considerations” and the majority largely ignores that explanation “and instead adopts the most damning interpretation of all available evidence.”

The majority opinion countered that such a map is “merely an evidentiary tool,” and cannot by itself determine a racial gerrymandering claim.

In the 1st District, the Supreme Court unanimously found that state officials didn’t need to increase the percentage of black voters, since minority voters there already had been electing lawmakers of their choice by landslides.

States do have leeway to make race-based redistricting decisions when interpreting the Voting Rights Act, the Supreme Court wrote, and the court “by no means” insists that a state legislature determine precisely what percent minority population that law demands.

“But neither will we approve a racial gerrymander whose necessity is supported by no evidence” and an issue of legal interpretation, Kagan wrote.

Justice Neil Gorsuch did not participate in the case, which was argued in December before he was confirmed to the bench.

The 2016 elections were held with new, court-approved congressional districts because of the lower court’s ruling. The new map maintains the current Republican partisan advantage in the state’s congressional delegation, which is 10-3, but makes significant changes to incumbents’ districts.

Butterfield, first elected in a 2004 special election, praised the Supreme Court for ruling against “an extreme case of racial gerrymandering.” Adams urged Congress to update the Voting Rights Act, which had a key enforcement provision struck down by the high court in 2013.

“This should serve as a wakeup call to the Republican-led general assembly, whose voter suppression tactics have been struck down twice in federal court, in as many weeks,” said Adams, first elected in 2014. “As elected officials, we should be working together to make access to the ballot box easier and more fair.”

The NAACP Legal Defense Fund said the ruling would “send a strong signal to other states” that racial gerrymandering attempts would be struck down, while Congressional Black Caucus Chairman Cedric L. Richmond said North Carolina was an example of a race to the bottom among Republican legislatures.

“Republicans don’t have it in their DNA to play fair when it comes to redistricting and they will do all that they can to prevent African Americans and other minorities from voting,” the Louisiana Democrat said.

Hans von Spakovsky, an election law expert at the Heritage Foundation, said the ruling adds to the confused state of the law on redistricting and how legislatures take race into account when trying to comply with the Voting Rights Act.

“The Supreme Court says race can be a factor in redistricting but not the predominant factor, a rule that is so vague, so broad, and so lacking in a definable legal standard that it is not really a rule at all,” von Spakovsky said in a written statement.