For Reps. Jared Polis, D-Colo., and Dan Maffei, D-N.Y., the past Fourth of July weekend was remembered for more than fireworks and American flags. The dads each celebrated births of their daughters, skipping out on typical Independence Day festivities.

In a statement, Rep. Maffei and his wife announced that Maya — the couple’s first child — weighed 7 pounds, 11 ounces and was 20 inches long.

“Maya is the biggest little birthday present I could have ever dreamed of, and we are so delighted to welcome her into the world,” Rep. Maffei said in a statement.

Also during this past weekend, Jared Polis and his partner — writer Marlo Reis — welcomed daughter Cora Barucha into the world on July 4, posting to Facebook a picture of Cora donning a quilted American flag sweater. Cora weighed 9 pounds and 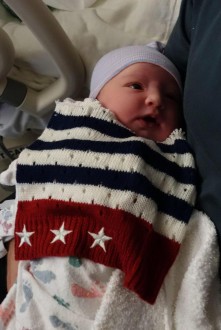 (Courtesy of office of Rep. Polis)

This is the couple's second child. In 2011, Polis became the first openly gay parent in Congress after the birth of son Caspian Julius.  As with that news, Polis has decided to keep the details of this birth tightly held.

Schutz said her great-great aunt, Kasha Barucha, fled to the United States from Russia in order to protect her family during the 1905 Russian revolution.

“Barucha means blessing,” Schutz posted to Facebook. “It is a good day to celebrate two blessings: my new niece, and the promise of ‘Inalienable Rights’ to ‘Life, Liberty, and the pursuit of Happiness.”

Save for later
Topics: kiddies