The fact that she’s the only woman suiting up for the 54th Annual Roll Call Congressional Baseball Game is not lost on Rep. Linda T. Sánchez.

And neither are any of the unique opportunities being a part of the sporting life has provided the California Democrat. 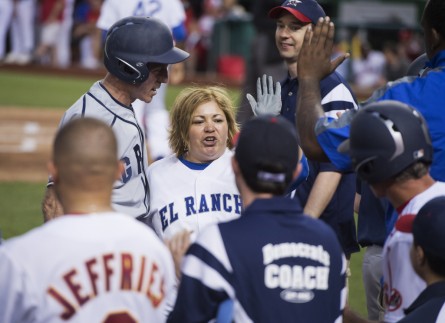 "When I came in as a freshman, I didn’t really know anyone up here,” the seven-term lawmaker said. (Guess big sister Rep. Loretta Sanchez, a fellow California Democrat, was just another face in the crowd.)

Sánchez's introduction to the ways of Washington was dramatically altered once Rep. Bill Pascrell Jr., D-N.J., encouraged her to give congressional baseball workouts a go.

“Pardon the pun, but that was a game changer,” Sánchez said of the inside track joining the squad has afforded her.

In addition to queuing up face time with members on both sides of the aisle who she might otherwise never have gotten to know, Sánchez said she learned early on that the best way to earn respect was to give everything her all.

“Just show up and do the work,” she said of the intensity she strives to bring to every challenge.

The insights she’s gleaned while racing around the field with others — including fellow Ethics Committee panelist and taxwriter Patrick Meehan, R-Pa., and Ways and Means Committee colleagues Pascrell, Kevin Brady, R-Texas, and Joseph Crowley, D-N.Y. — has also informed her professional outlook.

“You think about people that you trust first,” she said of the connection she feels to ballplayers, a bond that helps guide decisions about whom to partner with on legislative fronts and policy issues.

While on the field, she said she greatly admired the agility displayed by former Rep. Timothy H. Bishop, D-N.Y.

“He could get his glove on anything,” Sánchez said of the Democrat’s former third baseman. Rep. Lee Zeldin, R-N.Y., last fall ousted Bishop from Congress and the lineup by defeating him at the voting booth.

Sánchez also cherishes any opportunity she gets to patrol the infield. As of late, she’s filled in at second base, “largely because Raul Ruiz [D-Calif.] has injured himself. But I’ll take what I can get,” she quipped.

For the past few years, she insists she’s been able to pick out the voice of a sexist heckler who mocks her — chanting, “She can’t hit. She’s a girl,” a while back, and “Come on, Linda. Show us what you got,” in 2014, Sánchez recalled — during each at bat.

Sánchez relishes having come through with critical shots each time.

Though she’s not too keen on being pigeonholed offensively, either. 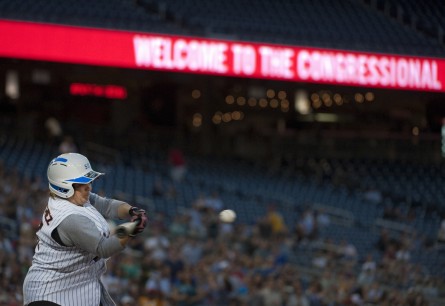 “I hate it when people refer to me as a power hitter. I’m a base-run hitter,” she said, stressing she is more interested in advancing runners and bolstering the team than in swinging for fences.

Fielding and hitting aside, Sánchez is perhaps most excited to have her son, Joaquin , in the stands Thursday night.

“I want him to grow up seeing that women can compete on the same field as men,” she said.

Related: A Day in the Life of a Congressional Baseball Playing Mom

Going to the Baseball Game? Sit in the Middle

A Day In the Life of a Congressional Baseball Playing Mom

Linda Sanchez Once Tried Playing for Both Teams