On the last day before the August recess, the Senate confirmed 65 of President Donald Trump’s nominees with a single bipartisan voice vote.

That has been a marked difference from the way Democratic senators have approached Trump’s picks for his team.

Sen. Kirsten Gillibrand of New York leads her colleagues in opposition to the president’s nominees, casting recorded votes for only five of 53 of them, according to a Roll Call analysis. Her votes stand in contrast to her home state’s senior senator and the chamber’s Democratic leader, Charles E. Schumer, who has supported 20 of the Trump picks who have received a roll call vote.

At the start of the year, Schumer made it clear that opposition to Trump's nominees would be supported by Democratic leadership. He even went so far as to upset his Republican counterpart, Mitch McConnell of Kentucky, by voting against the majority leader’s wife, Elaine Chao, a relatively uncontroversial pick to run Trump’s Department of Transportation.

Trump has railed against the slow pace of confirmation, blaming Democrats for “obstruction.”

It is a disgrace that my full Cabinet is still not in place, the longest such delay in the history of our country. Obstruction by Democrats!

After Gillibrand, next in line opposing Trump’s picks are Democrats Elizabeth Warren of Massachusetts and Cory Booker of New Jersey. Sens. Kamala Harris of California and Bernie Sanders, the Vermont independent who sought the Democratic presidential nomination last year, rounds out the top five. (Sanders caucuses with the Senate Democratic Conference.)

Nathan L. Gonzales of Inside Elections suggested there is a common theme with this list since the top five Democratic resisters have been frequently mentioned as potential 2020 presidential candidates.

“It’s not a secret that more than a handful of Democratic senators believe they can be a better president than President Trump. But they’ll have to navigate a competitive primary first, and being known as the chief opponent of Trump could be an asset,” Gonzales told Roll Call.

With the level of attention the nominations were getting from liberal activists, Gonzales said, “confirmation votes could be one important measure of a candidate’s dedication to opposing the current president.”

The Democratic senators opposing Trump’s nominees could be reacting to pressure from liberal groups, angered by the unexpected loss of the White House. Faced with Trump nominees who were openly hostile to the departments and agencies they were now slated to lead, and with the president’s senior adviser Steve Bannon stating that the administration’s goal was the “deconstruction of the administrative state,” many Senate Democrats were happy to oblige.

For those Democrats running for re-election in states Trump won overwhelmingly last fall, opposition has been doled out more judiciously. West Virginia’s Joe Manchin III and North Dakota’s Heidi Heitkamp both voted in support on 81 percent of the 53 roll call confirmation votes. 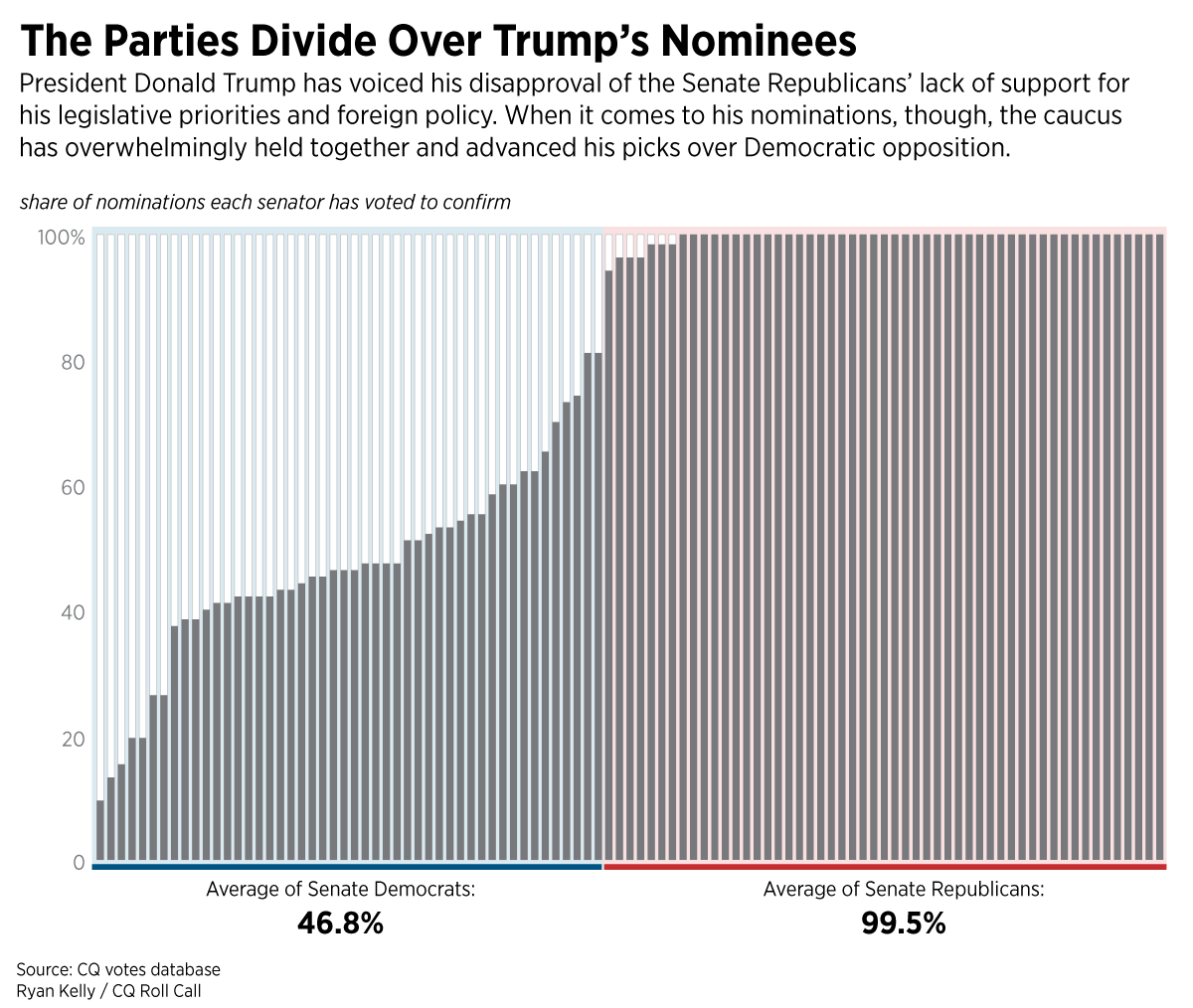