In this photo made using a teleconverter in-between two crop factors, President Barack Obama addresses a crowd of around 15,000 during a state arrival ceremony for Pope Francis on Sept. 23, 2015. (Photo By Al Drago/CQ Roll Call)

President Barack Obama on Friday took credit for the latest jobs report, saying the 4.9 percent rate shows his stewardship has made the U.S. economy the “strongest and most durable" in the world.

The Labor Department on Friday released data that was a mixed bag for both American workers and the Obama administration. The numbers showed the lowest unemployment rate in eight years and rising wages; they also concluded that 151,000 new jobs were created in January, down from three consecutive months during which nearly 300,000 jobs were created per month.

Save for later
Congress Has a List of Deadlines, Is Checking It Twice
Emma Dumain
Posted at Nov 30, 2015 5:00 AM

Congress returns this week for a pivotal work period with multiple deadlines, a busy schedule for an institution that tends to wait until the very last minute to get things done.

House lawmakers will spend the next four legislative days laying the groundwork on crucial pieces of legislation for the rest of the month, negotiating terms and conditions among themselves and with their counterparts across the aisle and Rotunda.

Save for later
Bill Shuster Wants 'Like Father, Like Son' Moment
David Hawkings
Posted at Nov 19, 2015 5:00 AM

When negotiators on the highway and mass transit bill formally convened Wednesday, it took only a few minutes for them to cut their first deal: Rep. Bill Shuster was named chairman of the conference committee.

The decision further cements the Pennsylvania Republican’s standing as one of the most prominent legislators of the year — and it raises the stakes for his performance in the next few weeks.

Rep. Bill Shuster, R-Pa., who'd been waiting three years for the House to take up long-term highway legislation, was wary when he saw nearly 300 amendments had been filed on the bill he'd helped draft. An added challenge: The bill was scheduled to hit the floor during Speaker Paul D. Ryan's first week on the job.

"I thought, 'Wow, that could be a little bit of a struggle,' " the Transportation and Infrastructure chairman said in an interview on Nov. 6. "But it ended up working out fine." Maybe more than fine. The 363-64 vote last week on passage of a six-year highway bill was a big win for Shuster, who had to negotiate with his own members, Democratic counterparts and colleagues on both sides of the aisle in the Senate. It also was a win for Ryan, who was elected speaker on a promise to open the legislative process.

Capitol workers installed the new Speaker of the House sign at the entrance to the speaker's office suite in the Capitol in the early morning hours of Oct. 30. (Bill Clark/CQ Roll Call)

Paul D. Ryan pledged in his bid for speaker to change the way the House does legislative business by pursuing conservative principles, more actively empowering committee chairmen and facilitating fuller debate on bills on the chamber floor. The Wisconsin Republican will get his first test in delivering on that pledge in his first full week on the job. The House starts working through a six-year highway bill Monday in anticipation of going to conference with the Senate. Bills funding surface transportation and infrastructure projects around the country have typically been poison pills for conservatives, who struggle with the federal government paying for programs that could potentially be bolstered by states. These members will surely look to Ryan to put his imprimatur of fiscal discipline on this highway bill iteration, and question his leadership if they think he is letting Congress spend beyond its means. 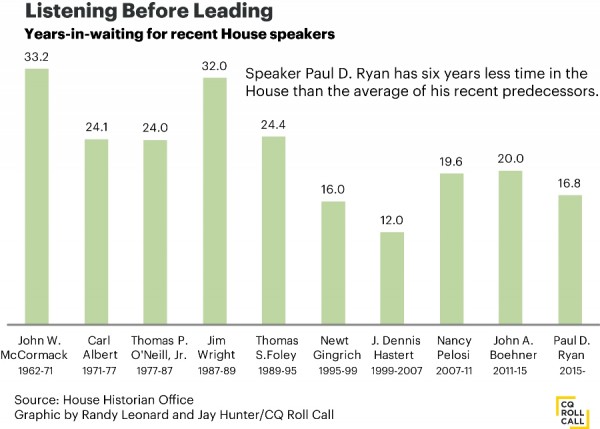 A Two-Part Process Ryan's challenge is only compounded by a process established in the days before his swearing-in. Leadership set up a scenario where House lawmakers get to offer amendments to a highway bill in two different ways. Members will be able to amend the six-year highway bill marked up in mid-October by the House Transportation and Infrastructure Committee, when close to 150 amendments were considered. Lawmakers will also get to submit for floor consideration non-transportation related amendments to the Senate's six-year highway bill. For the purposes of ultimately going to conference to combine the two chambers' separate visions for highway legislation, the House will not consider any of the Senate's highway-specific language. The Rules Committee meets Monday to set parameters for floor debate and Tuesday to decide which amendments get up-or-down votes. It has received at least 250 submissions. Also known as the "speaker's committee," the Rules panel will look to Ryan for guidance on which amendments will be allowed. Ryan will have to decide just how far he wants to go in living up to his pledge to open up the amendment process and let the House "work its will."

The House took steps Monday night to reopen the Export-Import Bank, making history by successfully employing a quirky procedural gambit for the first time in decades.

Sixty-two Republicans bucked their leadership to join with every House Democrat on a "motion to discharge" petition to reauthorize the Ex-Im Bank, for which the charter expired at the end of June. The 246-177 vote sets up subsequent votes on Tuesday aimed at reviving the federal agency that finances the sale of goods overseas, and which many conservatives deride as "corporate cronyism."

One Senate committee took action Wednesday to wield congressional power over the District of Columbia's Metro system amid criticism over safety and service.

Sen. Barbara A. Mikulski, D-Md., introduced a bill last week to alter the Washington Metropolitan Area Transit Authority's board of directors, granting the Transportation Secretary sole authority to appoint the federal members of the board. On Wednesday, the Senate Homeland Security and Governmental Affairs Committee approved the bill, which both Maryland and Virginia senators support, by voice vote. “I will not rest until Metro produces safety results,” Mikulski said in a statement Wednesday afternoon. “Enough is enough. I have demanded new leadership and a new culture of safety at Metro."

Sen. Charles E. Schumer is "not optimistic" about getting a big deal on international taxes to fund a robust highway bill.

The New York Democrat, who is No. 3 in caucus leadership, has been working with House Ways and Means Chairman Paul D. Ryan, R-Wis., and Republican Sen. Rob Portman of Ohio to find revenue from an overhaul of international taxation that could fund a surface transportation bill.