President Barack Obama paid his respects to Justice Antonin Scalia on Friday afternoon, visiting his flag-draped casket at Supreme Court on a day that hundreds of people lined up to honor and remember the conservative justice.

At about 3:40 p.m., the president arrived with First Lady Michelle Obama and stood silently before the casket, their heads bowed. The only sound was the click of dozens of cameras. The Obamas then walked over to view a portrait of Scalia, who died Feb. 13 after three decades on the court. Four of Scalia's former clerks stood at the corners of the closed casket, taking shifts throughout  the day.

Later, several Republican governors who were in town for the National Governors Association meeting -- including Iowa's Terry Branstad, Utah's Gary Herbert and Nevada's Brian Sandoval -- arrived at the Supreme Court.

Members of the public began to line up before dawn outside the building to pay their respects to Scalia. At the front of the line were high school seniors who happened to be on a class trip from Raleigh, N.C., to the nation's capital for an AP Government class, who said simply that they wanted to be part of a historic event. The students said they arrived before 7 a.m., starting a line along East Capitol St., just around the corner from the court's main entrance.

With several hundred onlookers, the hearse carrying the late justice, who died on Feb. 13 while vacationing in Texas, arrived outside the court on Friday morning, with Supreme Court police officers ready to carry the casket up the center steps leading into the majestic Great Hall, where Scalia's body will lie in repose throughout the day and into the evening.

Father Paul Scalia leads a prayer during the private ceremony for his father in the Great Hall. (Jacquelyn Martin/AP/Pool)

Inside, those paying respects pass by the closed coffin draped with an American flag. Four of Scalia’s law clerks stood vigil over the coffin at a time (they will rotate every 30 minutes), along with two security guards in formal dress.

Visitors passed a 2007 portrait of Scalia that shows him in his judicial robe; it is mounted in a gilded frame. On either side of the portrait are large wreaths of red, white and blue flowers, one of which has a ribbon that says United States Senate and one that says House of Representatives.

The portrait of Scalia shows him with a copy of The Federalist, a framed wedding photograph of Maureen Scalia, Webster’s Dictionary, an image of Sir Thomas More and other items from his life. It was painted in 2007 by Nelson Shanks. 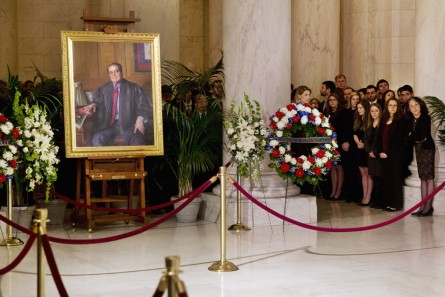 Law clerks and Supreme Court staff watch the private ceremony for Scalia near a portrait of the late justice in the Great Hall. (Jacquelyn Martin/AP/Pool)

Following the private ceremony, the doors opened to the public for a viewing, with Scalia's casket resting upon the Lincoln catafalque, which is on loan from the Capitol to the Supreme Court for the occasion.

Along the steps of the court were scores of former law clerks acting as honorary pallbearers for the morning, with media assembled to one side and of the public watching from across the street, along the edge of the Capitol grounds.

Jack Raslowsky, the president of Xavier High School in New York City, was sixth in the public line to pay respects. The justice, a 1953 graduate of the school, gave a 2011 address at the church and said the worst decision Xavier ever made was to make the Army JROTC program optional. “'You know, I have my issues,'” Raslowsky quoted Scalia saying to him afterward. “'But you know these are great kids. You must be doing something right.'” 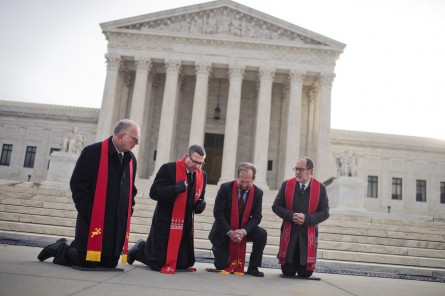 “I said, 'I hope you lead with that the next time you speak about Xavier,'” Raslowsky said. “I got a Scalia smile back.”

Marcus Wilson, a third-year law student at George Washington University also stood in line to pay respects to the late justice, whose’ writing stands out in classes. “When we come to a Scalia opinion or dissent, you know you’re going to have to take more time to digest it because he’s creative with his writing and it takes longer to connect to everything,” Wilson said.

By lunch time, the line stretched down the block and around to the back of the building, with waits as long as an hour and half in the cold.

A lone bagpiper was playing outside the Court, at times seeking to drown out a religious demonstrator who was wielding a megaphone.

The gentleman playing the bagpipes was Ben Williams, a retired Maryland public school teacher who lives in Silver Spring. Williams told reporters he plays a couple times a month around the Capitol, recalling one time he came by to surprise Rep. Betty McCollum, D-Minn., for a birthday.

"I did this on my own because I really respected this man, and what he did for his country," Williams said. "I was interested in some of his interpretations."

Williams played, among other selections, "Going Home" and "Amazing Grace," which he noted were two of the most popular selections at funerals.

"I've been piping for a long time. In fact, I should be better," Williams said.

Mary Clement was standing near the front of the line, wearing a white hat with and a long white coat as she sung hymns to honor the deceased justice.

" I just think he was a great father,  a great role model and a good man," said Clement, who lives in Silver Spring but hails from New Jersey, like Scalia.

Christina Harris from Chesapeake, Va., was waiting with her three children, a 16-week-old baby swaddled in blankets, a 2-year-old sleeping in a stroller and her 7-year-old daughter who has just started learning about the judicial system. "I hope my daughter knows she's a part of history and what a good man he was," Harris said. She considers herself a conservative and likes how Scalia interpreted the Constitution.

Her sister, standing nearby, shook her head. "You appreciate the fact that he thought it was a dead document, and I don't," said the sister, a federal prosecutor who declined to give her name.

Two Navy JAGs, Cmdr. Steven Myers and Lt. Tyson Marx, were waiting, in their dress blues to pay their respects. Myers recalled how he has attended three Supreme Court sessions and, on one occasion, he came with one of Scalia's former clerks. The justice invited the pair back to his office and spend 30 minutes engaging them in a wide-ranging legal discussion.

"He could talk a lot without getting into cases. I found him almost like a historian," Myers said. "Afterwards I looked him up some of things we said ... and they were all true."

Myers also appreciated Scalia's opinions. "When he wrote an opinion you would always read it. He was a good writer."

Inside the Supreme Court, visitors paused at the casket and again at Scalia's portrait, sending echoes through the marble hall as they snapped cell phone pictures and murmured comments about the scene and its symbolism.

One woman put her arm around a young girl and pointed out the wreaths from the Senate and the House, "That's the legislative branch," she whispered. "This is the judiciary."

Another woman asked a younger man to pose so many times that he lost patience. "Would you just stop taking pictures," he said.

She took another shot. "Beautiful," she said. "Beautiful." Barbara Day of Falls Church, Va., as last to get in a line that grew quickly behind her across the intersection of First and East Capitol streets while the president was inside. A paralegal for 15 years with the Department of Transportation, Day said she had "adoration and respect" for Scalia's public service. She called the president's visit a sign that he respected Scalia. On not being able to attend the funeral, Day said: "I'm not going to criticize the president's schedule. That's his choice.

Robbie Desimone, 23, of Long Branch, NJ said he took a bus from Newark to Washington on Friday and that the event coincided with a visit to his partner on line, Tamari Ramishvili, a 24-year old student at American University. While the line stalled during the president's visit, Desimone called Scalia "one of the greatest legal minds of our time."

Diane Grant-Boesen came to see Scalia’s repose but lingered when a police officer told her the president would come at 3pm. Outside the courthouse, she met Ann Ozer, who was visiting her daughter from Palo Alto.

The two quickly established that they leaned in opposite political directions but could agree on their estimation of Scalia. Grant-Boesen spoke of her family’s military ties – her husband was a descendant of Ulysses S. Grant and her son is an Army captain. She wore a floor-length Russian mink coat with a matching fox fur collar and cap and said she and her husband had once encountered Scalia at the opera. He made an impression, she said, because he was there alone and did not seem to mind engaging in conversation with strangers.

Ozer, in athletic wear, described herself as, “fairly liberal,” but she was from Kew Gardens – close enough to Scalia’s childhood home in Elmhurst.

“He seemed like a very nice guy,” she said of Scalia. “I never liked his decisions.”

The motorcade rushed past the two women, who quickly determined they would miss their glimpse of the president. Instead, they decided to continue their conversation in a nearby hotel, over tea.

Save for later
Topics: judicial-nominees judi