His best skating days may be behind him, but Rep. Patrick Meehan’s conduct during his hockey officiating career made a lasting impression on National Hockey League player and newly minted author Val James. 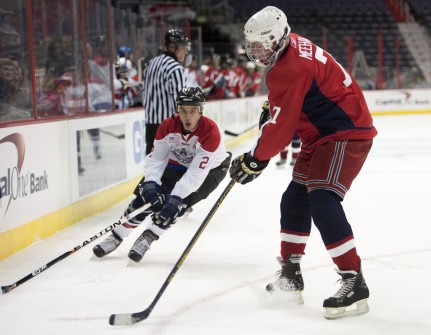 James, who details his life experiences in the forthcoming “Black Ice: The Val James Story ,” recalls one particular incident when the Pennsylvania Republican’s character brilliantly shone right through.

“When two Richmond Rifles fans cast a fishing line with a toy monkey tied to it into the penalty box where James was sitting, referee Patrick Meehan stopped the [Eastern Hockey League] game and demanded the ejection of the offending fans,” political reporter and hockey aficionado William Douglas chronicled on his blog .

“He did something that could have possibly at that point got him killed or lynched after the game,” James wrote. “But, nonetheless, he stood up for something, and that means a lot to me.” Meehan added that the toy that flopped onto the ice was bound in a hangman’s noose. “And that’s really what set me off,” he told HOH.

While James was not the first black man to break the sport’s color barrier — Willie O’Ree accomplished that when he donned a Boston Bruins uniform in January 1958 — Meehan noted that even as the first American-born black player in the NHL, James had it rough.

“He was a good hockey player, not a great one. But he was a determined player … and one of the toughest in the league,” Meehan said of James’ enforcer role.

It sounds like the current co-chairman of the Congressional Hockey Caucus was close enough to the action to accurately evaluate the good guys (“Val was just a class act,” he asserted) from the villains.

After coming up the ranks as a linesman, Meehan said his first head-refereeing gig was calling a Baltimore Skipjacks game in Erie, Pa. Just as Meehan said he went to drop the puck, two opposing players began shoving one another. He reprimanded the unruly wingers and gave getting things under way another try.

Pre-drop, the pushing started back up again. Meehan said he again spun back around to halt the pre-emptive ruckus. Once calm had sorta been restored, he tried — for the third time — to actually start the game.

But that didn’t happen.

Tired of waiting for the green light to clobber one another, the dueling brawlers dropped their gloves and began going at it. Then the benches cleared. Even the goalies got in on the melee.

“I hadn’t been one second into my career and I had 36 guys fighting on the ice," Meehan said of the unforgettable baptism by ire. “There was a lot of fighting in those days. It was just part of the game.”

There was so much violence, in fact, that sometimes refs got pummeled too. Like the time Meehan said an inexperienced linesman cost them both some lumps. Per Meehan, veteran refs knew to go over the top and secure a player’s arms before attempting to restore order. In this case, his rookie colleague failed to lock down the player's flailing appendages, resulting in a rain of blows showered upon the pinstriped duo. “I kinda remember having welts on the back of my head for three weeks after as a result of that,” he said.

Of course, that was nothing compared to the drama the Cold War created outside the arena. Meehan recalled being blown away by having to oversee a game for the Russian national team (AKA, the “Red Army”) the same day that the news broke that the U.S.S.R. had invaded Afghanistan.

“There was just a lot of intensity about it,” he said of the geopolitical hostility that suddenly overshadowed everything. KGB agents suddenly flanked the Russian players. And things got particularly ugly when he dared blow his whistle against the North American team.

“I got called a 'frickin' communist,’” he said of the insult hurled at him by an incensed observer.

The highs, however, were pretty awesome.

Meehan said he was privileged enough to spend some time in Colorado during 1979 with the squad that would go on to shock the world a year later in Lake Placid. “I was right there on the ground floor with all of them,” Meehan said of the summer he spent living with the athletes who would accomplish the “Miracle on Ice” and clinch the gold medal in a hall-of-fame-worthy contest against the Soviet Union.