Shooting in the Rear View, Ron Barber Drives His Own Way

TUCSON, Ariz. — Rep. Ron Barber guides his Ford through the flat, four-lane paved streets, ticking off landmarks on the corners of his desert city surrounded by jagged mountains.

That’s Rincon High School, where he enrolled as a sophomore in 1959. There’s the middle school his grandson attends. As he makes a left turn, Barber points to St. Cyril of Alexandria Church, where he married his wife, Nancy, 47 years ago.

“It was the middle of the summer, and what do you know, the air conditioner broke,” he recalled, driving by rows of adobe office parks.

On the opposite corner of the church is another Barber landmark, former Rep. Gabrielle Giffords' office, where he worked as her district director for several years. One memory sticks out: On the night of the Affordable Care Act vote, he put out a press release and left around midnight. A couple of hours later, someone shattered the office door and window. He said they later discovered bullets inside.

It’s not the most notorious time Barber risked gunfire — not even close. At the main gate of the University of Arizona campus, the former state bureaucrat gestures up the road toward the trauma center where he was treated after a gunman killed six and injured a dozen more, including Barber and Giffords, in January 2011. This is not the route Barber expected to follow.“If you’ve never run for office before, it’s a huge jump for everyone,” Barber recalled telling his wife when they first decided he would run for Giffords’ seat. “She saw what happened on Jan. 8.”

The 68-year-old Democrat is running his third big campaign for Giffords’ seat in the highly competitive 2nd District. He’ll face one of the GOP’s top recruits of the cycle, retired Air Force Col. Martha McSally, at a time when the national political landscape favors Republicans. The Rothenberg Political Report/Roll Call rates the 2nd District as a Tossup . Polls show a deadlocked race, and Barber's victory partially depends on how he tells his own tale of Tucson — not that of his former boss.

‘Gabby-fied’ Barber maneuvers through the downtown college campus where he majored in political science decades earlier. He recalled his bachelor buddies dunking him in the fountain in front of “Old Main” before his wedding — a local tradition, he swears.

The father of two touts Tucson like it’s as exciting as New York City, or Austin, Texas. The 2nd District includes east Tucson and the southeast corner of Arizona, bordering both New Mexico and Mexico.

It’s nearly 30 minutes into the driving tour of his hometown before Barber brings up Giffords.

“I have not had one regret,” he said later. “I learned so much from this woman who is the same age as my eldest daughter.”

He first met Giffords, then a state legislator, during his 30-year-long tenure with the region's Division of Developmental Disabilities. She would attend their information sessions for lawmakers, and he was impressed by her diligence and generosity.

After winding through a recently renovated downtown, Barber points to the federal court house where U.S. District Judge John Roll presided until he was killed by the crazed shooter. As Barber passed Sentinel Peak, also known as "A" mountain because of the massive university letter on its summit, he recalled another long drive.

It was 2005. He was returning from Phoenix when he heard on local radio that Republican Rep. Jim Kolbe was retiring. Barber learned Giffords was thinking about running, and asked his wife if he could retire and help.

He served as Giffords' community outreach director as the Democrat navigated a crowded primary and won her first term in 2006. Forgoing retirement plans, Barber was set to take a university gig when Giffords asked him to be her district director. 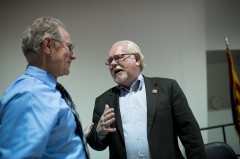 He didn’t hesitate, partnering with Gabe Zimmerman to set up Giffords’ office. (Zimmerman also died that January day.) Barber pushed the congresswoman to let him hire outside-the-box aides instead of campaign allies for his top priority, constituent services.

“It’s about fighting bureaucracy,” he described. “Dig into the soft part of their anatomy and hold on.”

Four years later, Jared Lee Loughner opened fire, showering bullets on a Giffords constituent service event in front of the Casas Adobes Safeway. Barber was shot twice — through the neck and in his leg. Today, he can’t feel his leg below the knee, and a dimple on his left cheek marks a bullet wound.

Giffords spent months recovering from gunshot wounds to the head, embarking on a long journey to regain her mobility and speech that caused her ultimately to resign a year later. She asked Barber to seek her seat in a 2012 special election.

“I think he’s a political junkie, but he never actually saw himself holding office,” said Joni Jones, an office manager for Giffords and Barber.

Learning to Fly It’s lunchtime in the Mo Udall Room at downtown’s El Charro, a restaurant that claims to have invented the chimichanga but is really known for the carne seca, beef that’s been dried on the roof.  To say Barber is well known in Tucson is an understatement. The British-born congressman owned a used toy store, Toy Trader/Stork’s Nest. One of his aides recalled buying a car seat for her little sister there years before they worked together.

“He was a longtime public servant in the community,” said Tucson Mayor Jonathan Rothschild, a Democrat who has known Barber since the 1990s. “It should help him a lot. He’s done an excellent job as our congressman.”

Since the shooting, Barber's face and name has been blasted on the Tucson airwaves. It isn't always flattering: His second-time foe, McSally, has chided him for supporting national Democrats, including President Barack Obama's health care law, which Giffords backed. McSally's victory depends on whether she can convince the district's large swath of independent voters that he's not. 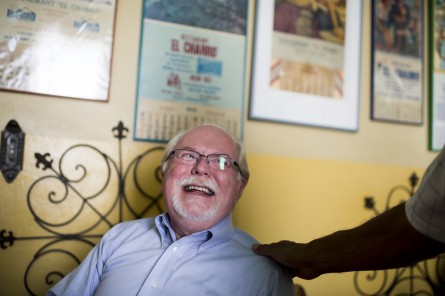 “I watch a lot of TV, and you are on it all the time,” one restaurant patron tells the congressman as they shake hands.

Lucky for Barber, his fellow diner meant this in the good way.

As Barber sips his Arnold Palmer, he remembers he resigned as district director on a Tuesday. He knew he would announce his campaign for Congress that Thursday. On Wednesday, he woke up with one thought.

“The next day I would be staffed, instead of staffing,” he recalled. “I had to kind of let go. I just had to pry myself off from the day to day details.”

The first month of campaigning was grueling as Barber was still recovering — emotionally and physically — from the shooting. The mild-mannered grandfather of five struggled with public speaking and the evil necessity of sound bites. He said he’s still learning how to speak briefly, and he drives his staff crazy by staying too late at events talking to people.

They give him looks, then nudge his arm, and finally put a strategic hand on his upper back. He knows the drill: He used to do the same with Giffords.

“I should have learned from that, but I didn’t," he said.

He recalled visiting the Safeway for the first time after the incident, where “the spot where we were shot seemed so small to me.”

“What you went through with Gabby was amazing,” offered another restaurant patron who approached the table.

He fondly remembers Giffords’ left eyebrow, which he could rely upon to send a signal of approval or disapproval for the topic at hand. A close-up photo of Barber and Giffords welcomes guests into his campaign headquarters in a mideast Tucson office park.

Today, they see each other at events every couple weeks, including just after Giffords commemorated the third anniversary of the shooting by sky diving.

“Gabby, you always set the bar high,” he told her. “But I’m not jumping out of a plane.”