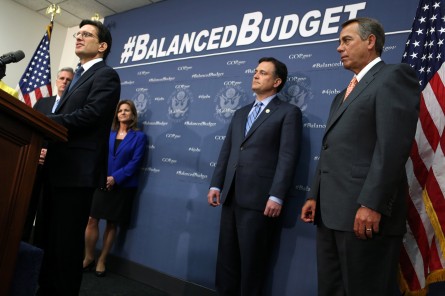 Updated 4:18 p.m. | In the one competitive race for a leadership spot, House Republicans elected Luke Messer to serve as GOP Policy Committee chairman.

The Indiana lawmaker beat out Republicans Tom Reed of New York and Rob Woodall of Georgia.

The Policy Committee chairman — the only competitive leadership race as Rep. James Lankford leaves the spot to become Oklahoma's next senator — is tasked with equipping members with research and aiding committees as they draft legislation. The chairman also gets a spot at the leadership table and a vote on the Steering Committee. Messer was nominated by influential Ohio conservative Jim Jordan, who was seconded by Phil Roe of Tennessee and Susan W. Brooks of Indiana. All three of those members, and Messer himself, were regulars in meetings with former Majority Leader Eric Cantor.

The results of the first ballot were Messer 92, Reed 78, Woodall 61. The second ballot had Messer with 137 votes and Reed with 90.

Messer was the first candidate in the race and lobbied members hard. After the election was over, Roe joked with Texas Republican Joe L. Barton, who was part of the nominating crew for Woodall, that both their speeches "convinced nobody."

"It was all those phone calls," Roe said.