One Third of Florida Delegation Retiring

Rep. Rich Nugent is one of those leaving the House this year. He doesn't want to live out of a suitcase anymore. (Bill Clark/CQ Roll Call)

Florida is renowned as a great place to retire. That's exactly what 10 members of its congressional delegation plan to do this year.

But they aren't giving up politics together: Four House members are running for the Senate, and another may run for governor.

Altogether, nine Florida House members and one senator are retiring this year, driven in part by a dramatic redistricting plan, term limits on chairmanships and, in the case of Republican Sen. Marco Rubio, a bid for the White House. That’s a third of the state’s delegation, the highest turnover rate among large states in 2016.

Members decide to retire every year, often after the holiday recesses when they’ve been back home, discussing future plans with family.

There are many forces at play, however, in the decision of nine House members from the Sunshine State to voluntarily not return to Washington next year.

Court-approved redistricting redrew Florida’s congressional map this year, putting some members in districts that would have been tough for them to win come November.

That was the case for Florida 2nd District Rep. Gwen Graham . Redistricting made the freshman Democrat’s district much more Republican. She announced in April she was “seriously considering” running for governor in 2018 rather than seeking re-election.

Rep. David Jolly , a Republican from the 13th District, was another victim of redistricting. He’s now running in the crowded GOP primary to replace  Rubio .

Rubio’s decision to vacate his Senate seat to run for president set off retirement dominoes with four House members now competing for his seat.

Rubio has repeatedly said since his exit from the presidential race that he wouldn’t be running for a second term. Although, as he joked to reporters last week , he knows he still could: the filing deadline is not until June 24.

The House Republican Conference places term limits on the chairmen of standing committees — once a member's term is up, many don't want to face the prospect of going back to the rank and file.

Florida is losing one committee chairman, 1st District Rep. Jeff Miller , who announced his retirement in March. Miller won a 2001 special election and in 2011 became chairman of the Veterans Affairs Committee. His term would be over at the end of this Congress. Miller has been an outspoken critic of the Department of Veterans Affairs, pressing for reforms at the department.

"Progress is measured in projects completed and lives impacted, and I think we made a difference. Now, it is time to turn the page on this chapter of my life and see what’s next," Crenshaw said in a statement in April.

For many members, the draw of family is too alluring to pass up.

GOP Rep. Rich Nugent announced in November he’d be leaving at the end of 2016. “After five years of living out of a suitcase … the tug of being apart from family has just become too great,” he said in a statement.

The most recently announced exit was last week’s retirement  notice from Rep. Curt Clawson, a Republican from the Fort Myers area.

It’s not a guarantee that every member of the delegation who wants to return will make it back to Washington next year.

GOP Rep. Carlos Curbelo is facing a tough re-election in a district that President Barack Obama twice carried by single-digit margins. Redistricting has since made the his 26th District even more Democratic, and it’s currently rated a Tossup by the Rothenberg & Gonzales Political Report/Roll Call. Trying to distance himself from the top of the GOP ticket, Curbelo has said he will not vote for Donald Trump. 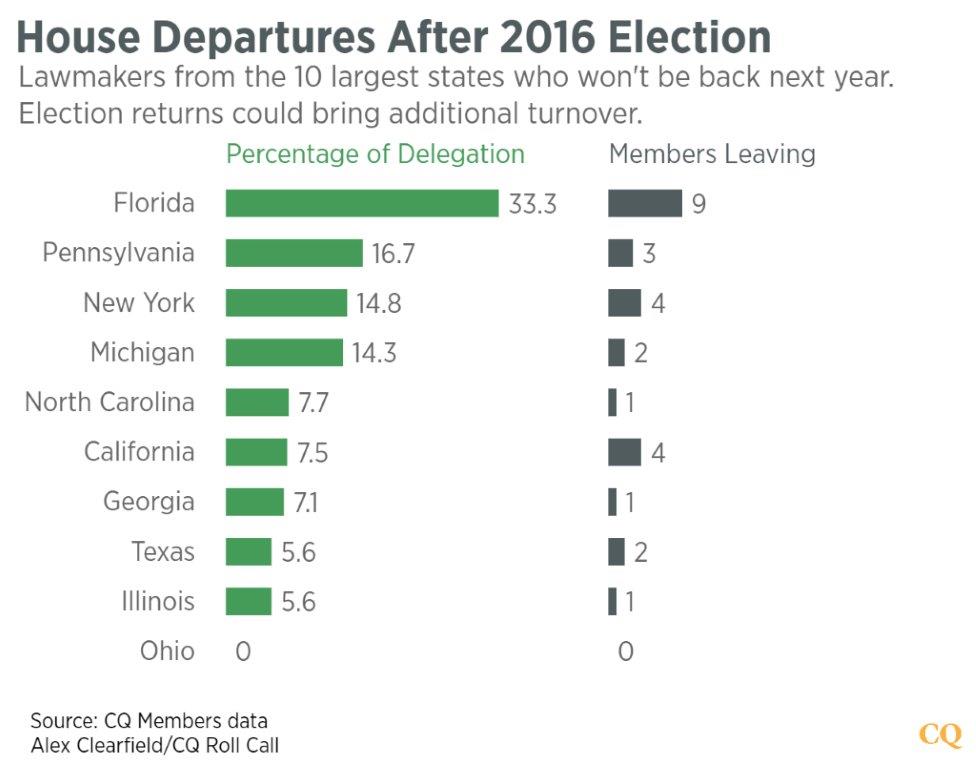 It’s not just Republicans who could be in trouble.

Democratic Rep. Corrine Brown, a 12-term member from Jacksonville, will be running in a newly designed district that changes the makeup of her constituency. The new district runs east to west, instead of meandering from Jacksonville south to Orlando as her current district does.

All of the departures mean there will be lots of new Floridian faces around the halls of Congress come January. But they won’t all be new to politics.

One of the men Rubio beat in the 2010 Senate race, former governor Charlie Crist, a Republican-turned-independent-turned-Democrat, is likely to win the newly configured Democratic-leaning 13th Congressional District.

That seat is currently held by Jolly, who is running for Rubio’s Senate seat. If Crist wins his House race, he’ll join one other ex-governor in the House, Republican Mark Sanford of South Carolina.