The speech fell just a few minutes short of the seventh-longest Senate speech in the chamber’s history, which lasted 15 hours and 30 minutes. But Merkley’s action did not delay a procedural vote on Gorsuch, which was set before he began his speech.

Senate Majority Leader Mitch McConnell, R-Ky., had already filed the cloture motion, or motion to end debate on Gorsuch’s nomination, before Merkley took the floor. That teed up a cloture vote on Thursday, which Merkley criticized as hastily moving the nomination.

“There is time between now and Thursday for us to air our views,” the Oregon Democrat said on the Senate floor around 8 p.m. Tuesday night. 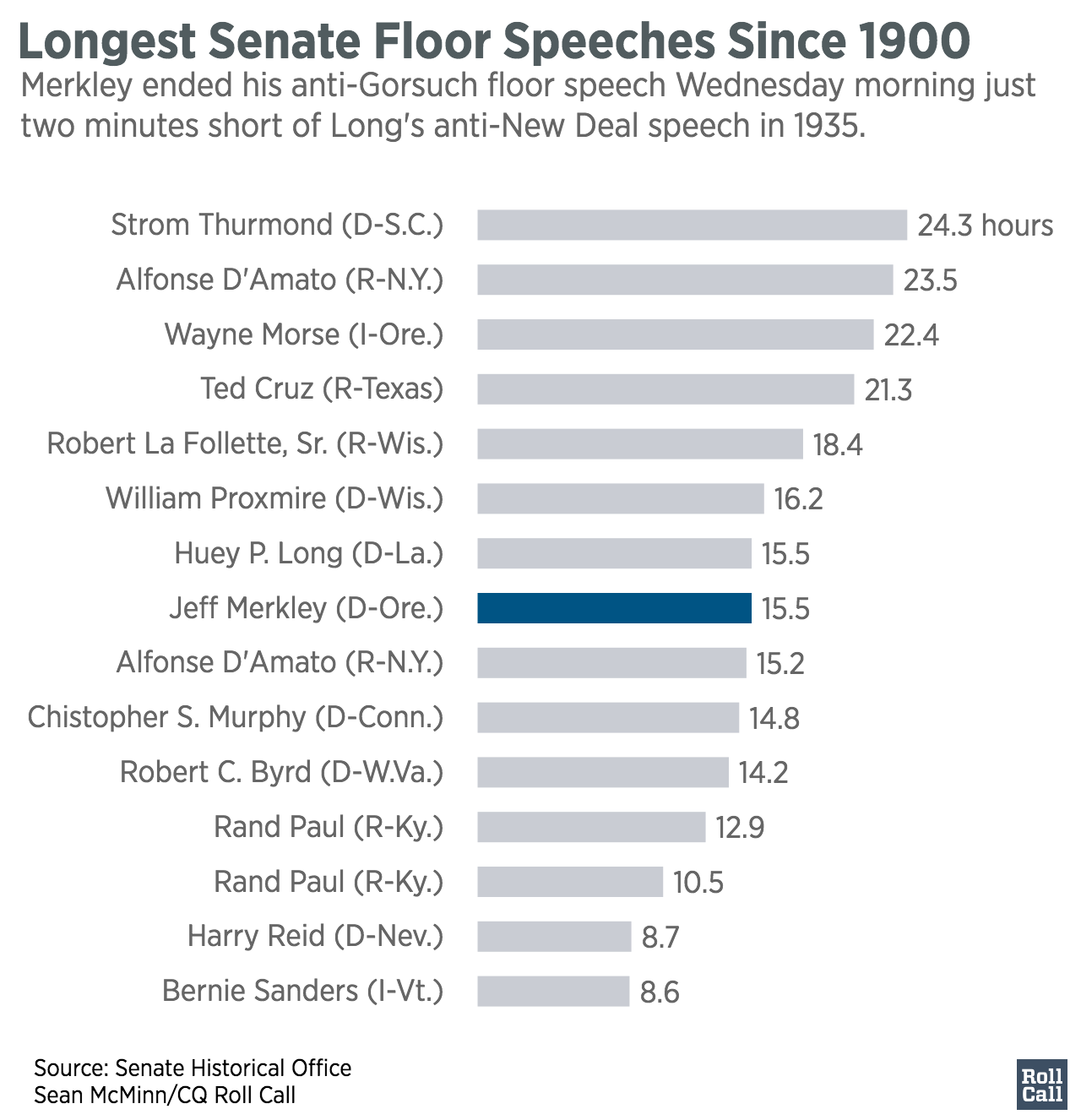 “This is just a continuation of firsts, first events that do no credit to this institution, no credit to the Supreme Court, no credit to our nation. In fact, pose substantial, substantial danger,” Merkley said, referring to the cloture motion being filed on the first day the Senate was considering Gorsuch.

But McConnell has argued that Democrats have forced his hand. Merkley said before President Donald Trump nominated Gorsuch that Democrats would attempt to block his nominee by filibustering, or not allowing debate to end, on the nomination.

Merkley told Politico that he would have objected to a simple majority vote on Trump’s nominee, which would have led to a cloture vote. Doing so is a senator’s prerogative, but a rarity for Supreme Court nominees.

The Oregon senator also detailed concerns that he and other Democrats have about Gorsuch’s rulings from the federal appeals court judge on the rights of women, workers and disabled students.

As he spoke past midnight, Politico and BuzzFeed published stories late Tuesday night about a book by Gorsuch that gave Merkley another argument against cloture.

“Maybe that [cloture] motion should be withdrawn given that there’s more information now to analyze,” he said.

Politico reported that someone provided documents that show several passages from Gorsuch’s 2006 book on euthanasia “read nearly verbatim to a 1984 article in the Indiana Law Journal,” among other instances. Assessments from experts on academic integrity ranged “from calling it a clear impropriety to mere sloppiness,” the report said.

The administration team supporting Gorsuch, which has lauded his academic record, defended the nominee. The team released statements from people who worked on the book as well as from Abigail Lawlis Kuzma, the author of the law journal article at issue.

“I have reviewed both passages and do not see an issue here, even though the language is similar,” Kuzma’s statement says. “These passages are factual, not analytical in nature, framing both the technical legal and medical circumstances of the ‘Baby/Infant Doe’ case that occurred in 1982. Given that these passages both describe the basic facts of the case, it would have been awkward and difficult for Judge Gorsuch to have used different language.”

Merkley’s stand, which started around 6:47 p.m. Tuesday, is not likely to have an effect on the rest of the week with the cloture vote already set for Thursday. His talk-a-thon was also not a true Senate filibuster, since it did not delay Senate business.

Merkley’s speech did receive attention from progressive outside groups including MoveOn.org and NARAL Pro-Choice America, which urged their members to turn into the Senate floor broadcast on C-SPAN 2 or to Merkley's Facebook page, which was live streaming the speech.

Merkley’s campaign also sent out an email blast encouraging people to watch and sign a petition to “Tell Senator Merkley, ‘I’ve got your back Jeff! Keep up the fight!’”

The Oregon Democrat is among the Democrats who will attempt to filibuster Gorsuch’s nomination. Democrats have enough votes to block cloture, which requires 60 votes. So the filibuster is expected to cause McConnell to invoke the so-called nuclear option, effectively changing Senate rules and lowering the cloture threshold on high court nominees from 60 to 51.

[Where the Senate stands on Gorsuch]

“The clear and undeniable fact is that the Senate is broken,” Merkley said at the time. “Thoughtful deliberation does not occur and far too much gets lost in a tangle of obstruction and delay.”

— Todd Ruger and Niels Lesniewski contributed to this report.