When talking about taking paternity leave, there seems to be two whirlpools of discussion: Do offices provide enough (or any) time off, and are dads actually taking the time provided to them?

One advocate for paternity leave believes there is room for improvement in both areas, and he is taking his message to Capitol Hill. Josh Levs, a journalist currently on leave from CNN, found the impetus to create change after he opted to stay home when his daughter was born prematurely. Levs' employer called him back to work, so he filed a lawsuit with the Equal Employment Opportunity Commission. Since then, Time Warner has revolutionized its family-leave policies: Dads now get six weeks of paid paternity leave.

Levs wrote about his experience in the book, "All In ," and he has been meeting with staff on Capitol Hill to drum up support for the FAMILY Act, which involves small shared contributions from workers and employers to provide income for people during family or medical leave. "I told Republicans there's no reason Democrats should own this issue," he said. "There's proven bipartisan support among voters and it's good for businesses big and small! I explain there are conservatives in my book who say they originally opposed [the Family and Medical Leave Act] and now like it."

Levs shared some of his insights with CQ Roll Call. A lightly edited Q and A follows.

Q: You’re an outspoken advocate for more paternity leave, for companies to offer generous policies and men to take the time off when offered to them. Now you’re taking your mission to Capitol Hill. How has it been received? A. By Democrats I met with, positively. By Republicans, just as something that wasn’t previously on their radar. But they listened. My message is that paid family leave is now proven to be good for business. These programs exist in three states. Businesses big and small like them. These laws do not require businesses to pay salaries during leave. Instead, they operate as insurance programs.

Right now, families are suffering. It’s ridiculous that the U.S. is the only developed nation — nearly the only nation at all — that does not ensure women have paid time off after a birth. Many nations also guarantee paid time off for dads. It’s a basic: When a baby leaves the womb, it should have a parent at home who, at least for a block of weeks, does not have to worry about putting food on the table. It’s totally beyond politics. It’s essential humanity. 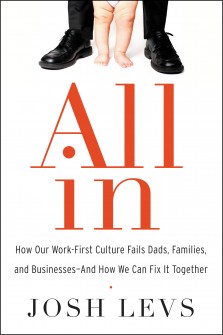 Q: What do you feel are the biggest barriers to men taking paternity leave? Is it office culture or a failure to recognize the changing parental dynamics at home? A. Most families can’t afford unpaid leave. Only 14 percent of companies offer any paid paternity leave, and the amount of time being offered has been going down overall in recent years. But even most men who do get paid paternity leave don’t use all of it. This means families are effectively leaving billions of dollars on the table. And it’s because of stigmas. These are proven. Some men who take time off for caregiving are demoted or even fired afterward. We need to think of these stigmas as a bully, and face that bully head-on by standing up as dads, exercising our rights and fighting back if we get punished. We have legal options!

Q: On Capitol Hill, many offices have ad-hoc leave policies, often without much guidance. In your time speaking to Hill staff, did any of them reflect on their own experience? A. We discussed that a bit. [There's a] New York Times story that showed Republicans and Democrats provide their employees with paid family leave, on the public’s dime. That’s a very important indicator that there is truly bipartisan support for paid family leave. Also, polls show that majorities of Democrats, Republicans and independents want a paid-family-leave insurance program.

Q: If we’re going to change the way men and women view taking time off for a new baby, where are some of the crucial places to start? A. It boils down to laws, policies and stigmas. We need laws like paid family leave that will allow both men and women the chance to be caregivers. We need corporations to discover that embracing the mothers and fathers in their ranks is good for business. "All In" contains lots of hard data proving this. Workers are more loyal, productive and happy — and better brand ambassadors — when their employers allow and support paid family leave, flexible schedules and other opportunities. These things are a win across the board.

Men need to drop “male privilege,” and women need to stop “female gatekeeping.” This requires a good, hard look in the mirror, and asking ourselves whether we’re really standing for, and even fighting for, the gender equality that we profess to believe in. 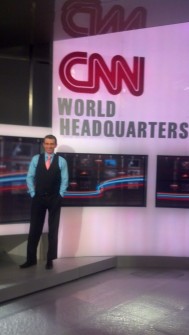 Q: You mentioned a growing coalition of groups has rushed in to support you on your mission to improve paternity leave policies. Where do you see the current obstacles, and how can workplaces overcome them? A. It’s been incredible. The night I announced my legal action, I was blown away by the outpouring of love that came from women’s and men’s groups, the left and the right, across different spectrums. I discovered that those of us who truly want equality are "All In" this together. But yes, obstacles remain. Some of it is what I call the Neanderthal mentality — modern day Archie Bunkers who truly want a 1950’s-style breakdown of what men and women do. Ignorance and the dangers of political attack ads are also a big problem. I explain in the book that we might need to create paid family leave nationally by lowering taxes. It would help fewer people at the lower ends of the economic spectrum, but it would avoid some of the inevitable attack ads that could plague a national effort to create the kind of system that’s working so well in California, New Jersey and Rhode Island.

As for how workplaces can overcome them, step one is to learn the fantastic results businesses are seeing from creating fair, gender-neutral policies that allow their workers with children to be present with their families. Ultimately, though, it comes down to workers taking the initiative. There are step-by-step lists in "All In" that help workers — both men and women — navigate the policies at their workplaces and push for change in a very optimistic, positive way. If, in the end, someone is a victim of gender discrimination as I was, then don’t be afraid to exercise your rights.