Pat Quinn Could be Drag on Illinois Democrats

SPRINGFIELD, Ill. — The national political tide isn't looking good for Democrats, but in Illinois this November, down-ballot candidates have an even bigger problem: the drag of Gov. Pat Quinn.

The Land of Lincoln is a hotbed of political activity this cycle, with Democrats defending three freshmen House incumbents and looking to pick-off one more — Republican Rep. Rodney Davis in the ultra-competitive 13th District.

All but one of those races take place outside of Chicago's Cook County — the last bastion of support for Quinn and one of just three counties he carried  in the state when he narrowly won the role in 2010. That geography is bad news for Democrats looking to tamp down losses in the midterms.

There was no clearer example of Quinn's problems than last week's Illinois State Fair, where elected officials, political operatives and party insiders from both sides of the aisle descended upon the Springfield fairgrounds for each party's respective day of rallies.

On Aug. 14, Republicans flocked to the fairgrounds to support Bruce Rauner, the party's wealthy gubernatorial nominee who rolled up to the rally on his Harley Davidson and then delivered a red-meat speech going after Quinn in front of a fired up crowd of supporters.

It was a stark contrast from Democrats' gathering the day before, where instead of riling up his base at the fair, Quinn instead hosted a low-key picnic to pose for photos with a more mellow group of supporters, many of whom were bussed in from the Chicago area.

Perhaps because in 2012 he was booed off the stage at the traditional “Democrat Day” festivities at the Illinois State Fair  — "Governor's Day," as it's now known — Quinn opted to deliver his own speech at a brunch for about 1,400 party insiders at Springfield's Crowne Plaza Hotel.

Energy wasn't the only thing missing from Quinn's event: Absent from the Governor's Day lineup were any of the three Democrats facing competitive re-elections in the Land of Lincoln: Reps. Cheri Bustos, Brad Schneider and Bill Enyart.

Bustos and Enyart hail from the northwest and southwest corners of the state, respectively. President Barack Obama carried their districts in 2012, but Quinn lost them by large margins two years earlier, and this fall is looking even more troubling for the governor.

Schneider is facing a rematch with former Rep. Bob Dold in the 10th District — the Republican he ousted in 2012 by a mere 1-point margin, even as Obama won there with 58 percent. The district is located in the northern Chicago suburbs, and while it votes Democratic in presidential cycles, it sent moderate Republican Mark S. Kirk to the House for five terms before he rose to the Senate.

Callis was the only candidate at the Quinn event. (Tom Williams/CQ Roll Call)

Former Judge Ann Callis, the Democratic nominee taking on Rodney Davis in the Springfield-based 13th District this fall, attended the breakfast. But she did not speak, nor did she bring with her any sort of large presence of supporters or staff to boost her candidacy.

Sen. Richard J. Durbin and Reps. Danny K. Davis, Robin Kelly and Tammy Duckworth, mingled with party leaders and other local activists as forks clinked on buffet breakfast plates in the voluminous ballroom. The Democrats were put on the defensive trying to explain to the local media who showed up at the breakfast why Quinn's unpopularity wouldn't be a drag on their party throughout the state.

Durbin said the populist message of the Illinois Democratic Party to raise the minimum wage and provide access to affordable health care would resonate with voters at the polls.

"When you have two multimillionaires running at the top of the ticket who are spending huge sums of money, it's going to change the equation, and so the rest of us have a little more of an uphill battle when it comes to the election," Durbin said of wealthy dairy magnate and perennial Republican candidate Jim Oberweis. He spoke to a gaggle of reporters, waiting outside the Crowne Plaza for Quinn to arrive for the event that morning.

While vulnerable Democrats avoided sharing the spotlight with Quinn during their day at the fair, GOP candidates and elected officials clamored to share a stage with Rauner. They included Kirk, Rep. Aaron Schock and Rodney Davis, and each talked more about Rauner and a rising Republican tide in this traditionally blue state than they did about Obama.

GOP operatives say Rauner has pledged millions of his vast personal fortune to build up a unified ground operation in the state — an effort the flailing state Republican Party has been unable to do for two decades.

"We pretty much have seen the Democratic Party collapse south of I-80 in central and southern Illinois," Kirk, dressed down in a red polo and khakis, told CQ Roll Call before his speech at the fair. "Enyart would be in real trouble because he’s very far south. The whole trend of the south being Republican has also affected Illinois."

"[The] top of the ticket on our side is a lot more attractive than Pat Quinn," Schock said, wearing a fitted t-shirt emblazoned with Rauner's name. "You do not see Cheri Bustos or Bill Enyart wanting to do anything with Pat Quinn. He’s the most unpopular governor in America; who wants to wrap their arms around that?" 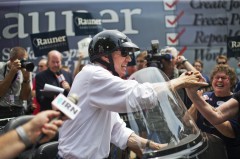 Quinn is, in fact, one of just two incumbent Democratic governors projected to lose their seats, with his race rated a Tilts Republican contest by The Rothenberg Political Report/Roll Call.

A former lieutenant governor to then-Gov. Rod Blagojevich, Quinn first ascended to the office in 2009, when Blagojevich was removed from the governor's mansion after his arrest, indictment and later conviction on a host of bribery and corruption charges.

Since then, Quinn has taken heat from both parties in the state for being unable to fix an estimated $100 billion unfunded public pension system , a problem that is bankrupting the state.

To be sure, while Quinn remains unpopular throughout the state, Rauner has his own vulnerabilities that Democrats hope could stave off sweeping losses across the state.

Worth a reported $1 billion, Rauner is facing intense scrutiny from the media for not releasing his tax returns — a theme Democrats push every chance they get on the trail.

Quinn made his argument against his rival during the Democratic breakfast.

"I have one house. I’m lucky to have one house. I’ve been in it for 31 years. I’m running against somebody with nine mansions. I have three credit union accounts and one checking account," Quinn said. "I’m running against somebody who has more money than King Midas and likes to stash some of it in a place called the Cayman Islands. That isn’t what Illinois is about."

It's a similar playbook his party used against GOP presidential nominee Mitt Romney in 2012.

And Rauner has widely criticized public employee unions, while listing Indiana Gov. Mitch Daniels as a role model — the governor who helped ban collective bargaining in the neighboring state. That is unlikely to curry favor for Rauner with the state’s robust unions, known for turning out voters on Election Day.

Jill Phillips, a Republican and member of the SEIU local 73 in Rockford, Ill., made the trip downstate to Quinn’s Governor’s Day appearance at the Crown Plaza Hotel in Springfield. She said she is frustrated with what she sees as Rauner’s attack on her fellow union workers.

“I'm not against anyone having wealth. But for the everyday worker, he has made his focus on us, the people who get up every day that work by the hour, whether they're union or non-union," Phillips said. "I’ve grown up in a Republican family and I belong to a union. It seems like the platform of [Rauner’s] campaign is to come after us. And that’s why we’re down here to talk to Quinn.”

For his part, Rauner goes after Quinn as needing the boot, and suggests Democratic incumbents up and down the ballot should join him.

"Farmers know something real important. Farmers know that when you’ve got a crop planted in the field, the same crop year after year, you know what happens? Deterioration. No productivity. Ultimately the land gets damaged. You know what it’s time for folks? It’s time to rotate our crops in Springfield," Rauner said, eliciting whoops and cheers from the crowd.

Some voters milling around the fair said they're ready for something new — across the board.

"What I think Illinois needs is business, is jobs, is employment," David Bruno, a Springfield-area resident and former union member, said near his 10-year-old daughter's prize-winning pig in the fair's swine barn. "Quinn has had his chance with a Democratic House and Senate. Rauner has a history of business, bringing business and being very successful. That is something we need."