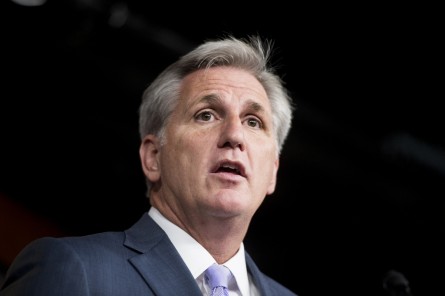 McCarthy, as expected, will seek the top position in the House. (Bill Clark/CQ Roll Call)

Majority Leader Kevin McCarthy, as expected, made it official Monday, telling fellow House Republicans in a letter he will seek the speaker's gavel.

With Ways and Means Chairman Paul Ryan, R-Wis., choosing to stand pat, McCarthy was widely regarded as the favorite to succeed House Speaker John A. Boehner, though the California lawmaker will face opposition: Florida Rep. Daniel Webster has also announced he will run. Boehner announced last week he will leave Congress at the end of October.

Our conference has been through a lot together. We are a part of the largest Republican majority since 1928. We have made real progress towards shrinking an overgrown federal government and reforming our broken entitlement system. But our work is far from done. We can’t ignore the differences that exist, but we can and must heal the divisions in our conference with work, time, and trust. That is why I have decided to run for Speaker of the House and graciously ask for your support. You all know me. We’ve spent late nights on the House Floor together. I’ve visited your districts and met your families and constituents. More importantly, I have gotten to know your ideas, your goals, and your vision for our conference and our country. I am running to be your Speaker because I know that the People’s House works best when the leadership you elect listens to members and respects the legislative process entrusted to committees. In short, I am guided by something Ronald Reagan once said: “The greatest leader is not necessarily the one who does the greatest things. He is the one that gets the people to do the greatest things.” But I am also sensitive to what is happening outside of the Beltway. I want us to be much closer to the people we represent, and I want them to once again feel like this is their government, they are in charge, and we are here to serve them. If elected Speaker, I promise you that we will have the courage to lead the fight for our conservative principles and make our case to the American people. But we will also have the wisdom to listen to our constituents and each other so that we always move forward together. Over the past weekend, I reached out to every one of you to listen to your opinions and ask for your advice. I know that you ran for Congress to make a difference, to leave a better country for your kids and grandkids. There are challenges ahead, but unified we have an amazing opportunity to make lasting conservative change. And I know when we work together under the banner of freedom and opportunity there is little that is out of our reach. I look forward to fighting with you for our shared conservative principles. Sincerely, Kevin