Updated 9:55 a.m. |  If this week was any indication, retirement season started early this year.

Three members of Congress  announced they would retire in rapid succession on Nov. 12, bringing the number of retirements so far this cycle to 14 — a much faster rate than the nine members who had announced their retirement  by this same point.

Typically, more retirements are announced after the Thanksgiving and Christmas recesses, when members head home to spend time with family and discuss future plans.

For example, five members of the House retired between November and December of 2013. Eight more announced retirements in January 2014 — the busiest retirement month of last cycle.

Political strategists from both parties expect the same post-holiday rush this cycle, and listed four categories of members to keep an eye on for possible exits in 2016.

Redistricted out of office: Legal challenges to district lines are still playing out in three states. If a new district map is ordered in any or all of those states, some members will inevitably be drawn into new districts too favorable to their opposing party to win re-election.

In Florida, for example, a pending redraw would make Democratic Rep. Gwen Graham's Panhandle-based district far too Republican for her to carry, likely forcing her to vacate her seat. The same thing goes for GOP Rep. Daniel Webster, whose Orlando-based seat would become too Democratic to win.

Florida Democratic Rep. Corrine Brown's 5th District would still be a safe Democratic seat under new lines, but it would include many new voters unfamiliar with the long-serving lawmaker. And with almost no money in her campaign account, it's easy to see Brown choosing to forgo re-election instead of facing a potential primary challenge.

Scandalous:  A handful of House members face ethical troubles that could derail their quests for re-election — enough to force them to retire rather than run for another term.

In New Hampshire's ultra-competitive 1st District, GOP Rep. Frank C. Guinta's campaign finance scandal  from his 2010 bid have led members of his own party to call for his resignation. He's vowed to run for re-election , but the scandal has crippled his fundraising, and GOP operatives say  a diminished war chest could force him out of the race.

Rep. Chaka Fattah, a Democrat from Philadelphia, has professed his innocence on the 29 counts of corruption he was indicted on by federal law enforcement officials. But now facing a tough primary fight with many of his inner circle taken down in the same corruption case, Democrats say it's possible that Fattah will hang it up. Fattah, however, has denied any retirement rumors, and announced the hire of a campaign manager Nov. 15 to run his re-election bid.

Longtime Rep. Michael M. Honda, D-Calif., is staring down a competitive rematch with a fellow Democrat who nearly unseated him in 2014. This time around, Honda is under investigation for an alleged pay-to-play scandal that makes him vulnerable in his attempt for a ninth term.

Term-limited chairmen:  The House Republican Conference places term limits on the chairmen of standing committees — once a member's term is up, many don't want to face the prospect of going back to the rank and file.

This cycle, Rep. John Kline, R-Minn., who is in his final term as head of the Education and Workforce Committee, has already announced his retirement .

Two other chairmen will also be term-limited out of their gavels after 2016: Michigan Rep. Fred Upton, who chairs the Energy and Commerce Committee, and Kentucky Rep. Harold Rogers, chairman of the Appropriations Committee. Both have vowed to run for re-election, but their names often come up on retirement watch lists from House Republican strategists.

Old guard:  There are always the members of Congress whose age and years of service call into question how much longer they'll stick around in the House.

This cycle, Republicans mentioned 85-year-old Rep. Sam Johnson, the Texas Republican now serving in his 12th full term in Congress, as someone on retirement watch. They also mentioned 72-year-old Jim Sensenbrenner, the Wisconsin Republican who was first elected to Congress in 1978, as a potential retiree.

On the Democratic side, all eyes are always on Rep. Collin C. Peterson. One of the last surviving Blue Dogs, Peterson has won re-election year after year, even in his GOP-leaning district, and is likely the only Democrat who could pull off that feat.

Peterson talked about retiring in 2014, but he was emboldened by GOP attacks on him to seek a 13th term. He says he's running again  but hasn't exactly been emphatic about it. Asked by the Minneapolis Star Tribune in June, Peterson said, "Yes. Until I'm not." 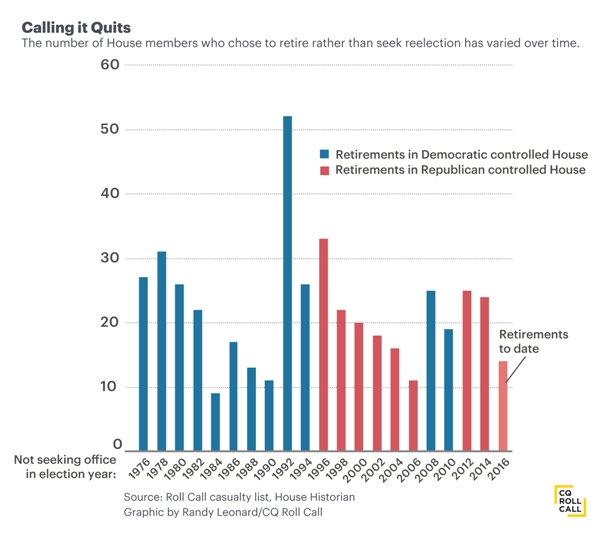 Related: House Retirement Rush Still Short of Average Cynthia Lummis Will Not Seek Fifth Term in House Report: Hinojosa Expected to Announce Retirement Friday Democrat Sam Farr to Retire From Congress Roll Call Race Ratings Map: Ratings for Every House and Senate Race in 2016 Get breaking news alerts and more from Roll Call in your inbox or on your iPhone.