Sen. Dan Coats wishes he had been able to do more with the all-star staff he assembled more than two decades ago, given the sphere of influence two of them now occupy in the top echelons of Congress.

"It's really gratifying to me to see that those two now occupy the top two staff positions in the entire United States Congress," Coats said in an interview, reflecting on how both chambers will benefit from their “synergy.”

“Rebuilding relationships, better coordinating messages, getting us more on the same track as a Republican Party, both in the House and the Senate,” will be a few benefits, he said. 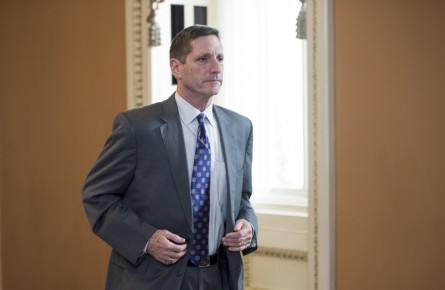 Coats noted that he, Ryan and Hoppe all have ties through the political orbit of Rep. Jack Kemp, R-N.Y., a self-described “bleeding-heart conservative” who became Housing secretary and then the party’s vice presidential nominee.

Kemp, who died in 2009, also founded the now-defunct Empower America think tank, where he mentored a young Ryan. It was during his work with Kemp that Ryan came to know Hoppe.

“We were all products of Jack Kemp somewhat, and he was one of our major leaders, and Paul was very much in that mix,” Coats said.

Hoppe's wife, Karen, also worked for Coats during his tenure in the House. Another member of Coats’ early Senate staff, through the influence of Hoppe and Soderstrom, was Mike Gerson, who eventually became a speechwriter for President George W. Bush.

Coats, whose first tour in the Senate started in 1989, when he was appointed to fill the seat vacated by Dan Quayle's resignation as vice president, lamented that the circumstances of his arrival hindered his ability to make best use of the super-staffers in his office.

Repeated statewide elections were a heavy burden, Coats said, and that made it harder to work on a robust legislative agenda with Hoppe, Soderstrom and his "really high-octane staff."

"My only regret was ... I should have taken more advantage of the great talent I had," Coats told CQ Roll Call. "I had to, unfortunately … limit what I could personally do here as a senator because there were so many demands as a Senate candidate, and that took a real toll on me."

"Dave would be what Donald Trump would say, 'high energy,'" Coats said. "Trump might look at Sharon and say 'low energy' without realizing how really smart she is."

Soderstrom served on Coats' staff toward the end of his first Senate stint. Hoppe had already left to work for then-Senate Majority Leader Trent Lott, R-Miss.

Coats said he believes Soderstrom and Hoppe have a history that could prove useful for their current bosses — McConnell and Ryan, respectively — when it comes to making deals and executing a coordinated Republican strategy.

"The details of the stuff get done through the chief of staff and their team,” Coats said. “So here you have two people that have worked together, known each other, [are] personal friends, colleagues, highly skilled, highly respected … now occupying the top two positions that implement what the speaker and what the majority leader want to do."

Lott talked of the "uniqueness" of Hoppe's experience working for House and Senate leadership, and noted that Hoppe and Soderstrom also share time served in his leadership office.

"That kind of intercommunication and trust is extremely important and extremely rare," Lott said. "The House people are always suspicious about the Senate."

Throughout the interview Coats, who served as ambassador to Germany in between his Senate stints, gave the sense he wondered what might have been had circumstances allowed the team to stick together.

"I really wasn't able to take advantage to the full extent of really digging in to legislation and doing big things," Coats said, "Because given the talent I had, boy, we were — we could have just shot for the moon."

Kate Ackley contributed to this report.