She’s still a few weeks shy of her 25th birthday and only three years into her congressional career. But Iowa Republican Steve King has given House staffer Sarah Stevens the ultimate vote of confidence: naming her chief of staff.

The newlywed aide — her husband, Christopher, signed on as executive director of the King-led Conservative Opportunity Society this summer — told HOH she’s been overwhelmed by the outpouring of support regarding her ascent.

“Co-workers were way too nice about this. And so was the congressman,” she said of all the fuss folks have been making about her likely becoming the youngest top aide on Capitol Hill. Stevens secured the illustrious post by making herself invaluable to Team King, starting out as press assistant in 2012 before graduating to press secretary (2013), communications director (2014) and deputy chief of staff (2015). Over the past few months she’s been pulling double duty, serving as spokeswoman and deputy CoS.

“Congressman King has created a meritocracy environment in the office — where hard work is rewarded and you are judged on how you perform in your role on staff,” she outlined via email, noting that King welcomed her with open arms just 72 hours after she’d collected her sheepskin from Liberty University. (She double majored in broadcast journalism and public relations and advertising, if you must know.)

“He never questioned my age or that I was a young female staffer, instead always looking to help me develop my professional skills,” Stevens said. “I’m very grateful for his trust and look forward to helping advance conservative principles in Congress.”

Promoting that agenda can be tricky, though.

Particularly when the boss sounds off on highly divisive issues such as border security, immigration policy and fruit-shaped body parts. 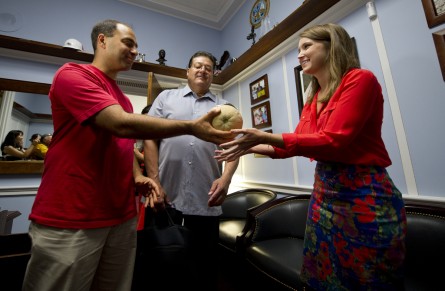 Still, Stevens relishes the opportunity to stay on top of current affairs.

“Not only does Congressman King like to stay out front on national issues in the media, but he is also a Member who represents Iowa, therefore, he plays a big part in the Presidential election as well. So while the pace can be challenging, it’s also a lot of fun,” she asserted.

She did, however, take just a little time to commemorate the new gig, stepping out with friends and family to Barrel for a round of gourmet burgers and specialty cocktails. “It’s one of our favorite spots on the Hill,” Stevens shared.

Back in the office, it’s business as usual.

“I will continue to play the role of Communications Director as well and hopefully look to hire a press assistant to train up,” she said of her immediate to-do list.