Ron Barber’s Past Has Him Fired Up About the Future

“Victimized” is not how former Rep. Ron Barber has chosen to carry on his advocacy-oriented career. “Energized” would be a much better characterization of his life after Congress.

“This chasm that’s developed between the two parties does not help the country,” the former lawmaker said of the current state of congressional affairs. “We need to break through that barrier.”

The Arizona Democrat embraced politics late in life, choosing to dedicate his earlier years to developmental disabilities and community engagement. He became the full-time district director for then-Rep. Gabrielle Giffords, D-Ariz., in 2006 and stuck by her thereafter — up to and including on the fateful morning gunman Jared Loughner opened fire on Gifford’s inaugural “Congress on Your Corner” event.

The Jan. 8, 2011, shooting killed six people and injured 13 others, including Barber and Giffords.

Giffords was shot in the head and some news outlets reported her death but she recovered to triumphantly return to Congress and later stepped down. Barber was hit several times but recovered from his wounds and accepted Giffords' challenge to serve out the remainder of her term by running in the June 2012 special election to replace her.

Barber narrowly defeated GOP challenger Martha McSally that summer, winning the down-to-the-wire contest by less than 1 percent. He earned the chance to serve his first full term in November 2012, but fell to McSally in a 2014 rematch decided by 167 votes.

Getting sent home allowed him to rejoin the effort to find a permanent home for a memorial commemorating the resiliency shown by greater Tucson in the wake of Loughner’s life-changing assault. 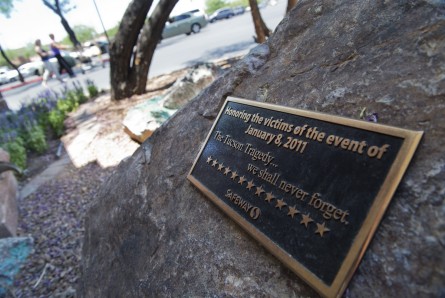 “The community has gone through an incredible healing process,” he said of the spontaneous tributes and voluntary aid that manifested in the aftermath of the attack.

What most impressed Barber, he said, was that the local community “didn’t just get angry, it got to work.”

That backing has so far translated into the roughly $1 million raised to help get Tucson’s January 8th Memorial Foundation off the ground.

The initial infusion of cash allowed the group to conduct its search for a winning design, facilitated public meetings with everyone from attack survivors to activists interested in historical preservation and laid the groundwork for the hiring of executive director Crystal Kasnoff. 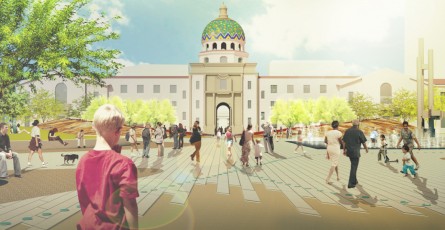 The next phase, Barber said, will involve gathering resources to cover physical construction costs. Giffords and Republican philanthropist Jim Click have signed on as honorary co-chairs of a crowdfunding campaign poised to kick off March 15.

“We’re projecting that it will take about $4 million to build the actual design,” Barber said of the heavy lift still ahead.

In addition to the grassroots campaign, Barber said the group has approached several members of the Arizona delegation about pitching in. Democrat Raul M. Grijalva has committed to helping the foundation pursue federal funding, while Republicans McSally and Sen. Jeff Flake have taken meetings about contributing to the cause, Barber said.

“They have definitely offered to support us in any way they can,” Kasnoff said of the open-ended agreements staff has received from federal officials.

“There’ll be some trips to D.C.,” Barber said of the ongoing congressional outreach.

That education process is likely to spill over back home.

Barber bemoaned a bond initiative Pima County voters rejected last fall that would have redirected up to $1.5 million in revenue to the memorial. “It was a little bit disappointing, for sure,” he said of the electoral defeat.

Meanwhile, he’s not given up on holding lawmakers’ feet to the fire on gun control.

Barber said the attack on one of their own got lawmakers on both sides of the aisle talking about gun violence for a while. Interest, he suggested, spiked about a year later after the shooting at Sandy Hook Elementary School in Newtown, Conn.

Things appear to have cooled off significantly since then.

“It was frustrating then and now that Congress has not taken up this issue,” he said of the legislative impasse surrounding the polarizing subject.

“We’re not talking about messing with the Second Amendment. We’re just talking about some common-sense changes,” he suggested. “Unfortunately, we’ve not made much progress.”

Barber indicated that getting anything done about it on Capitol Hill — particularly during an election year — remains rather daunting -- he maintains far-right conservatives have effectively taken democracy hostage.

“When people in this country say Congress is dysfunctional, they’re right. And it’s mostly because obstructionists in the House continue to block reasonable legislation,” he argued.

Regardless of who comes out on top in the presidential race in November, Barber urged lawmakers to focus on spurring economic development, building infrastructure improvements (“Projects which would put a lot of people back to work,” he calculated), a minimum wage hike, alternative energy programs and immigration reform as long overdue priorities.

“The inaction has been very frustrating,” Barber said.