Rolling With the DC Brew Crew

"By the end of the day, we'll all be drinking buddies," DC Brew Tour Guide Max Moline pledged as he pulled away from the curb and began inundating those of us who’d signed on for a mid-day swing through the various beer-making operations that have bubbled up across the area with trivia about barley- and hops-related beverages.

Moline’s curious career was made possible by visionary Chad Brodsky, the founder and CEO of a budding tourism experience that caters to folks who never balk at a chance to bend the elbow.

“D.C. has incredible breweries and we love to showcase them in different ways,” the entrepreneur said. Brodsky began shuttling beer fans around Burlington, Vt., in 2008, and later expanded to Boston. He set up shop in the nation’s capital last fall.

At the heart of each five-plus hour pleasure cruise is beer — a dozen (or so) tastings, to be exact — plus a custom designed meal pairing conducted at a participating location. Per Brodsky, a typical weekday tour can feature pop-ins at:

On the weekends, Brodsky said guides tend to take folks behind the scenes at:

Hellbender and Denizens Brewing Co. appear to be the latest additions.

“It’s been awesome,” Brodsky said of the reception the nascent service has received from suds seekers.

Mount Up “This is R&D," the local brewmaster who rounded out my tour group declared as she hoisted a glass of inky-linking stout to her lips. Turns out, industry types love to check in on one another. And DC Brew Tours provides the perfect vehicle for investigating what fellow practitioners are up to.

A cooler tucked in the back of each van preserves any six-packs or growlers guests might procure along the way. "But there is no drinking in the van," Moline said as we set out in search of potent potables.

To wit, the confirmation email sent out to each prospective client warns against “pregaming” (pounding drinks ahead of time) before arriving at the pickup spot.

Once inside the transport, the discarded nametags plastered everywhere suggest folks from as far away as Indonesia have piled into the same vehicle to pursue a crash course in drinking like a local.

As we rumble across the District, Moline provides an abbreviated history of modern brewing: Hunter-gatherers stumble upon fermented grains, ancient Mesopotamians enshrine quality control in the code of Hammurabi (sub-par brewers were drowned in bad batches), Egyptians pay slaves in beer ("The pyramids were built by a bunch of drunks," Moline quipped.) and the Protestant Reformation is sparked by the Catholic Church taking control of the gruet mixtures used to season beers. He also attempted to drill into everyone’s skulls each step, from milling to bottling, of the time-honored brewing process.

Then we started drinking.

Our first stop was Right Proper, where brewer Chris Percello explained that most low alcohol beers can be moved from fermentation to tap in 18 days. The long-term projects stored in the "funky room" — an aging area stocked with 18 casks, including reclaimed bourbon barrels, red wine casks, peach mead barrels and two massive sherry casks ("Those ain't moving," he said.) — are rolled out less frequently, but tend to attract hardcore fans. 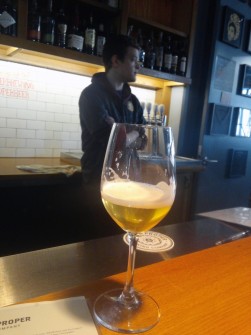 The saison-like Nabi had a citrus nose and delivered toastiness on the palate. I preferred the copper-colored Lookaftering, a biere de garde boasting a hazelnut finish.

A few gulps later, we were on our way to District ChopHouse & Brewery, where a combo plate of bar snacks and a pick-your-own drink flight awaited.

The best grub on the platter were giant meatballs braised in sugary nut brown ale and topped with caramelized onions, and some of the biggest, crunchiest onions rings this hired mouth has ever laid eyes on.

Things eased up at Hellbender.

The Bare Bones Kolsch, their most popular draft per staff, was light and refreshing (great session beer).

The Red Line Ale, though hoppier, was still approachable. "There's nothing else like it out there," one Hellbender aide said, citing Smithwick's as closest in style to the medium-bodied brew. The Eft IPA delivered as promised, featuring an herbaceous nose and hoppy punch in the mouth (classic beer geek beer). An experimental cream ale was interesting; less rich than anticipated, but with an undeniably buttery slickness.

Denizens provided, perhaps, the most spirited pours of the day.

Southside Rye IPA started surprisingly sour but then built to a hoppy crescendo. The Double IPA produced a yeasty brew with a caramel finish. The Third Party Tripel had the biggest personality of the bunch; gorgeous bouquet wafted right out of the glass, followed by waves of spice rolling across the tongue.

HOH's only regret? Not getting to sample Ponch’s Porter (a homage to "CHiPs'" Erik Estrada).

Getting to Know You As one might expect, quite the lively bunch showed up for an evening trip.

"The early people should have been handed beers," one impatient rider proclaimed while we waited for stragglers. "This is not your bachelor party, Cramer," his pal shot back.

"I could do this job," an Arlingtonian proclaimed after hearing part-time guide Liz Selbst telling out-of-towners about the rise of microbreweries in Northeast ("cheap land").

"You would be surprised how many people offer to drive the van for me," Selbst said of the well-meaning, but often incapacitated guests she carts home each evening.

Then there’s the time she encountered a really live one.

"Do not open the doors of the van while we are moving," she said by way of the final, and perhaps most important rule of being in the van — an edict required after one loose cannon attempted to create a spontaneous drop-off point after eating the foam off a brewery’s blow-off bucket earlier in the evening. "Her rationale was ... she was ready to go home," Selbst said.

A few twists and turns through the Northeast, and we were suddenly at Bardo’s doorstep.

"Everyone's strapped, right?" a tour mate joked when the van came to a halt in the eerily ramshackle alley adjacent to the outdoor brewery. 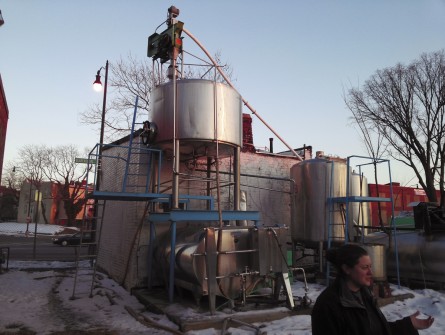 Inside, about a dozen locals crowded around the minute bar; some were playing with the friendly boxer sniffing around in a skull-and-crossbones covered sweater, others pedaled up on bikes with empty growlers slung over their shoulders.

"It's good ... for a porter," a pair of beer fans said of the oddly tame beverage.

Then it was on to Atlas in Ivy City.

The place was packed with all kinds, from birthday partygoers to wastoids struggling to maneuver pulled pork sandwiches to their mouths. 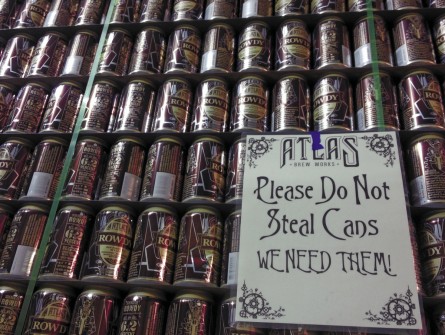 Everyone seemed to enjoy District Common (light hops, plenty of flavor) and Rowdy Rye Ale (boldly spiced, but I could drink a ton of them). The jury split on the Pumpernickel Stout (dark, bready beer) and the Saison Des Fêtes (what I imagine potpourri tastes like).

Across the river in Alexandria, Va., the Port City tasting room was overflowing. Music was blasting (Misfits, Dropkick Murphys) throughout, and large groups of people were doing their best to crowd available tables.

Selbst conducted the most interactive portion of the tour here, starting out by allowing folks to taste raw malt ("Don't get too much or it'll taste like dog biscuits," she warned.), passing around pelletized citra ("Smells like weed," one pleasantly surprised young woman exclaimed.) and liberty hops, and them recapping the brewing process.

The signature Optimal Wit relayed that telltale banana flavor. The pitch-black Tartan Ale unleashed a not-at-all unpleasant bourbon-y sensation. The Maniacal Double IPA has a firm handshake — extra hoppy nose and taste, extra spicy on the palate. The Porter was the perfect nightcap, coating the taste buds in syrupy richness.

By the time we arrived at Cap City, everyone was starving. Which may have been the only way to get us to eat the wretched food served by the restaurant — a blob of generic hummus, heavily sauced yet tragically dry Buffalo wings, mixed greens dotted with goat cheese.

Luckily, the beers helped wash away the plain. 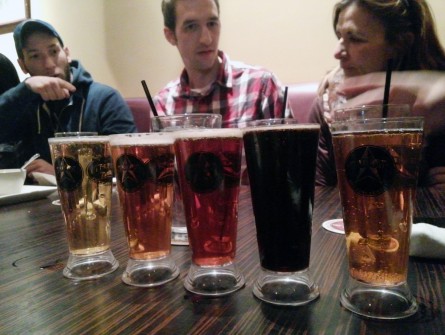 The Pale Rider was terrifically complex, revealing a spicy-sweet character bolstered by a healthy dose of hops. The Amber Ale was even bolder (ample spice, plenty of bitter). Vienna Lager was a crowd pleaser; my tablemates appreciated the bubbly, slightly honeyed brew.

And, just as Moline promised, friendship blossomed all around.

“Are you all going out after this?" one half of a suburban couple asked some rowdier gents as the tour came to a close.

"We should all go out!" the group pretty much chanted in unison.