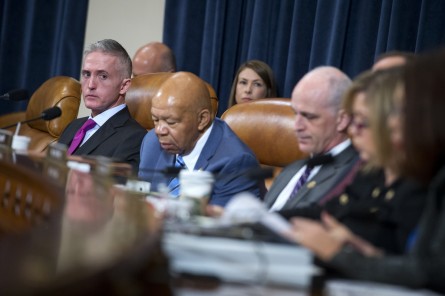 The feud between Republicans and Democrats on the Benghazi Select Committee intensified Wednesday after the Republican National Committee announced it had filed a lawsuit to force the State Department to turn over all of Hillary Clinton's emails from her tenure as secretary as state.

“The RNC’s public lawsuit is only further proof that congressional Republicans’ investigations of Benghazi and Secretary Clinton’s emails are motivated by election-year politics and a clear abuse of taxpayer funds for political purposes," a Democratic spokesman for the select committee said. "House Republicans have already wasted more than $6 million taxpayer dollars on the Select Committee alone and are expected to spend at least ($1 million) more before they issue their final report.”

The panel's Republican spokesman fired back, saying the Democrats have been solely focused on protecting Clinton, not conducting a serious investigation. "Their motivations are obvious: they’ve endorsed the former secretary of state for president, and will no doubt continue to act as a full-fledged arm of her presidential campaign," the Republican spokesman said.

The select committee is investigating the Sept. 11, 2012, attack on the U.S. diplomatic compound in Benghazi, Libya, and the State Department's response. Clinton, who led the agency at the time, and her emails have become a focal point of the investigation.

The RNC announced two lawsuits Wednesday that follow up on Freedom of Information Act requests it filed in October and December. The RNC said it has not received any documents or information in response to the requests.

"These are things that we have  been seeking for months and  months and months,  and the State Department has  blown us off," RNC Chairman Reince Priebus said on CNN Wednesday. " W e have to bring the case  forward and ask the court for  relief." Contact McPherson at lindseymcpherson@rollcall.com and follow her on Twitter @lindsemcpherson.