Posted Feb 8, 2016 5:00 AM
Eli Yokley
@eyokley
Super Tuesday Means High Stakes for Anti-Trump Republicans Sanders Gets Another Hill Endorsement: Alan Grayson Incumbents Who Thought They Were Safe Getting a Scare

For Kentucky Sen. Rand Paul, maybe the necessities of a modern presidential campaign were just a bit too much.

A former strategist for the Republican said while Paul's drive to become president was never in question, the first-term senator's national ambition "clashed against his personality – his prickliness, not wanting to do certain things and not being comfortable" with everything from making the ask on the fundraising circuit to what is asked of a candidate in this digital age. That was on public display one day last October, when Paul's campaign aired an entire day of his life on the road on the Internet. During a stop in Iowa at a fast-food joint, Paul answered negative questions about himself, demurring to the camera that he was just doing what his advisers told him to do – "riding around Iowa, looking at cornfields and answering silly questions."

One of those – "Is Rand Paul still running for president" – came at a challenging time for Paul, once thought to be a formidable player in the presidential race – and he could not hide his disdain. "I wouldn't be doing this dumb-ass live streaming if I weren't. Get over it."

When interviewed last week by Roll Call, a number of Kentucky Republican operatives with ties to Paul, said his campaign, which he suspended last week to run instead for re-election, failed to adequately handle the activist energy that propelled outsiders like billionaire Donald Trump and Texas Sen. Ted Cruz, and the rise of ISIS, both of which shifted the electorate's interest to a set of issues different than his.

That hurt Paul, once a libertarian rising star who, early on, was expected to be able to build a devoted base of libertarian supporters rallied by the two earlier campaigns of his father, former Texas Rep. Ron Paul.

While many of his Republican presidential opponents were campaigning at the Iowa State Fair last August, Paul was on a swing through the Northwest. His chief strategist, Doug Stafford, said at the time the trip was a sign of Paul's ability to “organize and compete” in later nominating contests, and Paul bragged from Alaska that his attention there would ensure that he was in the race for “the long haul."

Scott Lasley, chairman of the Warren County, Ky., Republican Party and a professor at Western Kentucky University, said, "I think the key would have been to have his dad's coalition and build on it, and that didn't really happen."

Paul's campaign hoped to capitalize on the elder Paul's online fundraising ability and couple it with traditional fundraising efforts by the candidate himself. But that never fell into place, forcing Paul to take money from his re-election fund while his opponents were wooing donors.

Republicans interviewed said that Paul's worst moment was during a September debate . With millions watching Trump at center stage, Paul was at the end – trailing most of his opponents in the polls. When Trump questioned why Paul was on the stage, Paul criticized someone who would publicly attack another person's looks being in charge of the nuclear arsenal.

Trump responded, “I never attacked him on his look, and believe me, there's plenty of subject matter right there."

“He had a bad debate, period, and he never recovered,” the strategist said.

Paul's best moments may have come well before he entered the presidential race. His 2013 fight for digital privacy rights, which came after a decade of woes about the Bush-era Patriot Act, excited libertarian-minded voters. So did his work with Sen. Cory Booker, D-N.J., on criminal justice reform – which led him to Ferguson, Mo., following the police shooting of an unarmed black man and earned him attention from Democrats.

Paul, a libertarian rising star, was expected to be able to build on the two earlier campaigns of his father. (Chris Maddaloni/CQ Roll Call File Photo)

Paul maxed-out in the polls last May, shortly after he announced his candidacy, at 10 percent  in a national average. He never led in the race and ended so low that he was not allowed on a prime-time debate stage, an embarrassing blow less than a month before the first contest.

In Iowa, Paul's aides said it was clear their thunder was stolen by Cruz, the fiery conservative who denounced "radical Islamic terrorism," and won the state by scoring victories in some of the counties where Paul's father had done well, leaving Paul in fifth place.

Still, on Tuesday, members of Paul's staff were not entirely aware that he was considering dropping out of the race. But, they said it was not a total surprise, either. "Could he have gone longer? Yes. But at the end of the day, Rand's a pragmatist and a realist.”

For all but about two months, the issue of Paul's re-election to the Senate was one that hung heavily around the campaign's neck. Last fall, some Republicans in his state were privately grumbling  that the national effort was distracting from his re-election bid back home.

Lasley said some of the pressure on Paul had came from the class of donors on which he was relying to fund both campaigns. Paul transferred $1.4 million from his Senate account to his presidential campaign. Lasley said Republican contributors who supported more viable candidates for president were "probably not going to donate fully unless they’re positive that money is going to be focused here."

Before Lexington Mayor Jim Gray, a wealthy Democrat, announced he would challenge Paul last week, Kentucky Democrats had no candidate to take him on. Their first choice, former State Auditor Adam Edelen, lost re-election along with most of the party's statewide slate in November, which took some of the hometown pressure off Paul.

"He’s not as strong today as he would have been if he wouldn’t have run, but it wasn’t doing damage on a day to day basis," said Lasley.  Around the state, his presidential campaign had been the butt of some jokes. 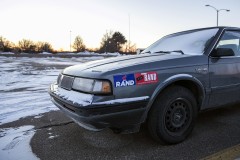 "Rand Paul is busy, he has a presidential race to lose," said Matt Jones,  a popular sports radio host, on stage in May at the annual 2015 Fancy Farms Picnic, a bipartisan cattle call. With the crowd laughing and Senate Majority Leader Mitch McConnell of Kentucky, a Paul endorser, sitting behind him, he added, Paul's "not gonna win. The crazy people are voting for Donald Trump or Bernie Sanders."

While Paul always knew he would have to fight Cruz for the tea party mantle, Lasley said, “Trump was not a predicted possibility." Other candidates may have detracted libertarian voters who would be inclined to support Paul.

Scott Jennings, a Kentucky-based Republican strategist who has helped elect McConnell, questioned whether "that particular brand of pure libertarianism can ever win a Republican primary for president," anyway, because of where the voters are, "even though the libertarians are much closer to us than they are the Democrats."

While Paul’s positions “might not have been helpful” in the presidential nominating contest, Jennings said it is "darn sure going to be helpful in the Senate race."

Of course, Democrats are already using Paul's attention to the presidential race against him. Sadie Weiner, a spokeswoman for the Democratic Senatorial Campaign Committee, said in a statement that Paul has "made clear he viewed the Senate seat as little more than a consolation prize."