Save for later
In recent years, Sen. Rand Paul, R-Ky., has taken to Twitter for his annual "airing of grievances." But this year he's summed them up in a 38-page report. 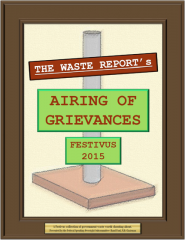 Paul is set to release a report on Wednesday documenting government spending in "a Festivus collection of government waste worth shouting about."
The presidential candidate's annual tradition pays homage to the fictional holiday of "Festivus," which originated on the television show "Seinfeld." The holiday includes feats of strength, an aluminum pole (which is displayed on the cover of Paul's report), and an "airing of grievances" from throughout the year. Paul's past grievances have ranged from the rising national debt to a lack of retweets from Sen. Cory Booker, D-N.J. But, according to the report provided to Roll Call ahead of official release, this year he's focused solely on government spending.
"Our investigations into federal spending may not have uncovered any government contributions to something called The Human Fund (Money for People)," read the report, another nod to the sitcom, "but we did find Uncle Sam putting taxpayer dollars to work creating a foreign made-for-TV cricket league, paying for federal yoga classes, developing a climate change video game, and studying whether being in space changes the effectiveness of golf clubs."
The report, compiled by the Homeland Security and Governmental Affairs Federal Spending Oversight and Emergency Management Subcommittee that Paul chairs, details more than $1 billion in "wasted taxpayer dollars" for 33 government programs, studies, and grants. Over the year, the subcommittee has released a series of waste reports, including a "Christmas edition" for the holiday season, highlighting a $50,000 federal grant for a T.V. commercial for Georgia Christmas trees.
Paul is one of a handful of other Republican senators who have railed against wasteful spending throughout the year. And he is the third to put out a so-called wastebook, continuing the tradition that former Sen. Tom Coburn, R-Okla., began when he was in the Senate. Earlier this month, Sen. Jeff Flake, R-Ariz., released a book ahead of the new "Star Wars" film, titled, "Wastebook: The Farce Awakens." Sen. James Lankford, R-Okla., has followed Coburn's lead in releasing a book also.
Related: Flake Channels ‘The Force’ to Fight Government Waste
Lankford Joins League of Waste Watchers
New Generation of Senate Waste Watchers

Save for later
Topics: 2016 rand-paul budg