Obama Urged to Put Qualifications Over Ideology on Court Pick 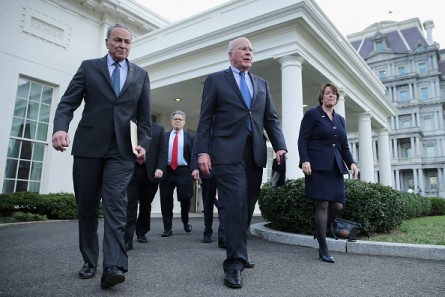 Senate Judiciary Committee Democrats on Thursday urged President Barack Obama to put legal qualifications over ideology in picking a Supreme Court nominee, an approach that could put Republicans in a bind.

Obama should select an "impeccably qualified person who can get bipartisan support,” the No. 3 Senate Democrat, Charles E. Schumer of New York, said after a meeting with Obama aides at the White House. The remark came after a reporter asked if the president should pick a liberal candidate. Another committee member, Sen. Richard Blumenthal of Connecticut, signaled that’s just what Obama is thinking. The president “is not concerned so much about the politics as the person," Blumenthal said.

Senate Republicans are vowing to reject any Obama nominee. Instead, they want the next president to pick a candidate to fill the seat vacated by the death last month of Justice Antonin Scalia.

But there are signs the strategy could create problems for Republicans -- and Democrats are no doubt conscious of that.

Schumer did not cite that survey, but he did say it appears the American people are “coming to our side.”

He pointed to comments made earlier Thursday by Sen. Lindsey Graham of South Carolina, who warned his party that the position could set a new precedent for handling high court vacancies in an election year.

“That’s going to be the new rule,” he said, warning his party is betting on an election that appears tilted against its side. He advised the GOP to accept Obama’s nominee because Hillary Clinton, the Democratic front-runner, would likely select someone who is more ideologically liberal, if she winds up as president.

The Judiciary Committee Democrats said White House officials did not disclose who is under consideration. Nor did they solicit candidates to add to Obama’s list or be moved to the top.

Schumer said he is confident the nominee will have "outstanding credentials" and would be able to get "bipartisan support."

The Democrats and White House officials also did not discuss the timing of a nomination. But Sen. Amy Klobuchar of Minnesota said they delivered a “sense of urgency -- but careful urgency.”

Contact Bennett at johnbennett@cqrollcall.com and follow him on Twitter at @BennettJohnT. Related: Grassley: ‘Why All This Outrage About a Hearing?’ Democrats Goading Grassley See photos, follies, HOH Hits and Misses and more at Roll Call's new video site. NEW! Download the Roll Call app for the best coverage of people, politics and personalities of Capitol Hill.