Once more with feeling. Obama is preparing his last State of the Union Address. (CQ Roll Call File Photo)

Perhaps the surest prediction about the next State of the Union Address is that it’s going to be the last speech afforded that lofty title for fully two years.

The second reliable forecast is that on the night of Jan. 12, President Barack Obama will take a non-traditional approach to his final annual appearance before a joint session of Congress. The first of those expectations is borne of modern precedent; the second comes from the White House itself.

Gerald R. Ford was the last lame duck who came to the Capitol to deliver a State of the Union in the waning days of his presidency. (“There is room for improvement, as always, but today we have a more perfect union than when my stewardship began,” he declared on Jan. 12, 1977, the last time the speech was as early on the calendar as it is this year.)

Four years later, Jimmy Carter sent an exhaustive written report to Capitol Hill a week before leaving office. But the four subsequent presidents all allowed their final election-year addresses to stand as the last word.

And so, while this will be the first State of the Union with Paul D. Ryan looking over the president’s shoulder from the Speaker’s chair, it will very likely be the final time Obama stands on that rostrum.

His aides are promising a different sort of speech. There is no point in reiterating the customary laundry list of legislative wishes, almost all of which are guaranteed to remain unfulfilled by the Republican Congress.

Dwelling too long on his plans for bypassing the Hill — starting with this week’s executive actions to tighten gun control  — will only inflame partisan anger and make life more difficult for any Democrat bidding to succeed him. Instead, Obama is planning to use his time to unspool his broader views about the big challenges facing the country and the government’s role in addressing them.

A year from now, his successor will be writing an inaugural address that by custom will be similarly lofty. After that, the 45th president will likely maintain the practice begun by Ronald Reagan and repeated by every new president since, coming to the well of the House to seek congressional cooperation in fulfilling campaign promises on a single pressing issue.

Only after a full year in office is the next president likely to declare a readiness to carry out the duties of Article II, Section 3 of the Constitution — “from time to time give to the Congress information of the State of the Union, and recommend to their consideration such measures as he shall judge necessary and expedient.”

January 2018, in other words, is the next time after next week the Capitol will be tuned into a sound stage for the prime-time TV extravaganza the State of the Union has become in the past half century.

SOTU to Focus on ‘Future Generations’

It’s now filled with as much ritual and ceremony as anything that ever happens on the Hill outside of an inauguration.

Long before the hour or more of comic opera standing ovations — superficially bipartisan in welcoming the president, but genuinely partisan thereafter — viewers can expect all the other usual customs.

There will be the elaborate tableau of “ordinary citizens” seated with the first lady in the gallery above the GOP cloakroom door, whose stories will be invoked to illustrate ideas in the speech.

On the floor, members of the diplomatic corps and the Joint Chiefs of Staff are only bit players; the cameras will be much more focused on securing rare footage of Supreme Court justices and glimpsing big-name congressional faces. (A shot capturing all three GOP senators remaining in the presidential race would be the ultimate “get” for the pool network.)

There will be the seven seconds of national fame for the House sergeant-at-arms — Paul D. Irving for a fifth year — when he introduces Obama right after 9 p.m. Then there will be glimpses of the usual crowd of congressional groupies who have camped out for hours along the center aisle for a chance at a moment of face time with the president as he comes down the aisle. 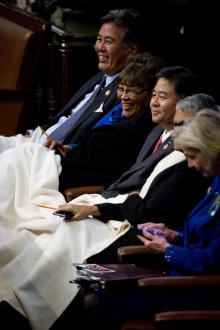 And there will be speculation about the identity of the most notable person missing — the so-called designated survivor, an official in the presidential line of succession who’s taken safely far from the Capitol and guarded by the Secret Service for the night, so there’s some continuity in the American government if the unthinkable happens. (If no Cabinet secretary gets tapped, the assignment could fall to 81-year-old Republican Orrin G. Hatch of Utah, who as the longest-serving current member of the majority is Senate president pro tempore, No. 3 in the pecking order after the men seated behind the president.)

Like so much else in Washington, the whole thing used to be on a fundamentally smaller and simpler scale.

For more than a century, the president fulfilled his responsibility by delivering a thick and bureaucratic report that also amounted to his budget request. Woodrow Wilson decided it was a smart idea to use the State of the Union to sell his agenda in person — and a joint session once a year to hear him out has been the default setting since 1913.

The bully pulpit has expanded as technology has changed. Since Calvin Coolidge in 1923 the speech has been on the radio. It’s been on national television since Harry Truman’s address in 1947. Lyndon B. Johnson moved the proceedings to the evening in 1965, while webcasts began early in the tenure of George W. Bush.

Now the audience may have maxed out. The Nielsen ratings don’t include those digital live streams, but they nonetheless show steady and steeps drop in viewership for Barack Obama’s speeches. He got 20 million fewer sets of eyeballs last year than in his first speech to Congress — a drop of 40 percent, to 31.7 million people in 2015, the smallest audience in 15 years.

Next week’s speech is Obama’s final chance to reverse the trend, which seems like a decided longshot.