And then there were seven. The results of another presidential nominating contest Tuesday night in New Hampshire brought with them another round of suspended campaigns.

Former Hewlett Packard CEO Carly Fiorina announced her plans Wednesday afternoon. That announcement came before New Jersey Gov. Chris Christie told his campaign staff he would do the same. "I've said throughout this campaign that I will not sit down and be quiet. I'm not going to start now," Fiorina said in a post on Facebook . "While I suspend my candidacy today, I will continue to travel this country and fight for those Americans who refuse to settle for the way things are and a status quo that no longer works for them."

On Tuesday night during his speech conceding defeat in New Hampshire, Christie said he would forgo planned events in South Carolina to head home, "take a deep breath " and reassess his campaign.

Fiorina, the only woman in the Republican field, finished the Iowa caucuses and the New Hampshire primaries with just one delegate. On Tuesday, she earned 4 percent of the overall vote. 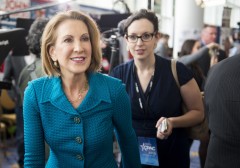 In New Hampshire, she was bested – just barely – by Christie, who received only 7 percent of the vote after pouring in much of his time and energy there. Christie emerged from the first two contests with zero delegates.

Even after his highly lauded debate performance over the weekend, during which he rattled Florida Sen. Marco Rubio, his poor performance in the Granite State threatened to leave him off the debate stage when the other Republican contenders meet again on Saturday.

Roll Call Race Ratings Map: Ratings for Every House and Senate Race in 2016 Get breaking news alerts and more from Roll Call in your inbox or on your iPhone.