Hill Climbers: From Hacks to Flacks

“I’ll just sort of talk. I know what it’s like. I’m not going to make you pull teeth, because I’m not a politician,” Richard Piatt, communications director for Utah Rep. Mia Love, said jokingly.

Piatt is used to interviews, but he's spent most of his career on the other side of the table: He worked as a broadcast journalist for 27 years before arriving on Capitol Hill in January. Sixteen of those years were spent working for a Utah TV station, which is where he met Love. He's not the only former reporter now working on the Hill, or even for a freshman House Republican. One other is Ryan Saylor, press secretary for freshman Rep. Bruce Westerman, R-Ark., who worked as a print journalist before joining Westerman's team in December.

Both men met their future bosses while reporting on their congressional campaigns.

Piatt covered Love’s unsuccessful 2012 race and her victorious campaign in 2014. He interviewed Love in Washington shortly after her election, and she asked him to be her communications director while he was setting up his equipment for the interview.

The reporter said he wasn't easy to convince. The incoming freshman followed up, and he eventually had dinner with Love and her husband to discuss the opportunity.

“She told me a story that she tells in stump speeches a lot. ... One of her kids had the opportunity to go up in a hot air balloon and passed because he was afraid," Piatt said. "So she went up anyway without him. And when they landed he said, 'Oh, that looks like a lot of fun, now I want a turn.' But by then the conditions had changed and they weren’t able to go back up again. Then she told me, ‘This is a lesson to you. Opportunities come and go. Windows open and close. This is a unique opportunity for you, and I hope you’ll take it.’”

After conferring with friends from both political parties, he finally agreed.

For Piatt, the offer of a new job came at the right time. He was frustrated with journalism after taking a pay cut, losing his Sunday morning talk show and being placed back on a general assignment, rather than the politics, beat.

“I got in the hot air balloon. Now let’s see where it’ll carry me,” he said with a laugh. 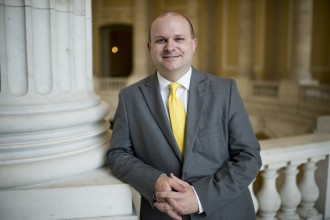 Saylor was also looking for a change when he applied to work for Westerman.

“After two years of covering local politics and business, I was ready to move on and try something new,” Saylor said.

He reported for a hyper-local news website in Arkansas, where he covered Westerman’s race. The day after Westerman won, Saylor took a chance and gave the congressman-elect his résumé.

"This is a different path than I thought I would go, but I’m really happy with it," Saylor said. "If I were to go back to journalism at some point, it would give me an inside look at how this works."

Piatt also thinks this experience would benefit his reporting should he return to journalism, saying it "provides a new dimension that could be valuable to someone" later on.

The two former reporters said they think the reverse is true as well, that their journalism experience is beneficial in their new jobs.

“It definitely gives me an advantage in being able to find new methods to communicate with constituents,” Saylor said.

Piatt said his broadcast experience makes him a good coach for Love’s TV appearances, while his general reporting background improves his foresight.

“I think it’s turned out to be valuable for [Love] because I can give her a perspective to see things through, like what are we doing in the long term," he said. "You can spout off about something, but you need to think about where this is going to lead you and whether saying this is going to pay off for you in the long game."

Both men look fondly upon their past lives as journalists, but they have no plans to make another career change any time soon.

“Being a journalist, it never really leaves you," Saylor said. "You’re always going to have the desire to cover the news and tell people what’s going on. That’s the great thing about being a comms director. You’re able to communicate with the people."