Updated 5:40 p.m. | Rep Luis V. Gutiérrez, one of Congress' most outspoken advocates for immigrants, on Wednesday called for expanding the Affordable Care Act to cover all of the estimated 11 million undocumented migrants in the United States.

“The goal is to make integration and inclusion real for millions of families that are locked out under current law,” the Illinois Democrat said in a floor speech introducing his proposed legislation. 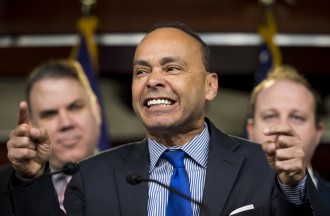 “As it stands right now, undocumented immigrants are not subject to the individual mandate and cannot buy into health insurance exchanges even if they use their own money.  My legislation will change that.  It says that we stand for inclusion.”

Citing last week's papal address to Congress (the pope repeatedly urged U.S. lawmakers to follow "the Golden Rule" ), Gutiérrez said: “Doing unto others as you would have them do unto you means moving forward with no restrictions on which brother and sister and neighbor we think of as ‘eligible’ or ‘deserving.’”

The Gutiérrez legislation faces long odds in the House, where proposals to overhaul immigration have been stymied by Republicans who insist the federal government must first address holes in border security.

But the issue of whether immigrants here illegally should get access to Obamacare has been there from the beginning. When Obama gave his joint address to Congress on the health care bill in 2009, he said illegal immigrants would not have access, which prompted Rep. Joe Wilson, R-S.C., to shout "You lie!" at the president. Wilson later apologized for the outburst.

Save for later
Topics: immigration icnw