Congressional Cemetery's Day of the Dog: It Could Get Ruff

Posted Aug 29, 2014 11:34 AM
Jason Dick
@jasonjdick
Impeachment clouds hang over home stretch of Iowa caucuses Waiting for Pelosi: The Senate theater of the absurd The year in Political Theater: Our favorite 2019 podcasts

Congressional Cemetery will help usher out the dogs days of summer with its Day of the Dog , welcoming local breweries, food trucks, dogs and the people who serve them on Saturday.

The free event, which lasts from 11 a.m. to 5 p.m., is just the latest good-vibe party to swoop in on the final resting place for so many Capitol Hill denizens. Last week, the cemetery's latest 5K, Flee the British, brought the historically minded running crowd over for a race on the 200th anniversary of the burning of Washington by the British army. The British muskets that doubled as the starting gun were a nice touch, as was "Dolly Madison" fleeing the redcoats in a golf cart. There were even redcoat hecklers. "Run, you cowardly Washingtonians!" one said from a hillock full of family mausoleums. 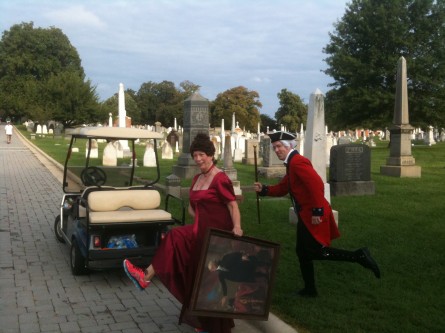 "Dolly Madison" attempts to get away from a marauding British soldier and save Gilbert Stuart's portrait of George Washington. (Jason Dick/CQ Roll Call)

Washington Post writer Joel Achenbach recently recounted how weird a conflict the War of 1812 , including that "we are a little vague on the question of who won," and "we have a decent idea of when it happened, because of the name, but given the critical events of August 1814, the conflict possibly should be called 'the War of Approximately 1812.'"

In other words, the Flee the British race and Day of the Dog fits in perfectly for a quirky cemetery that last year employed a herd of live goats to dispose of the poison ivy and invasive weeds that threatened the grounds . 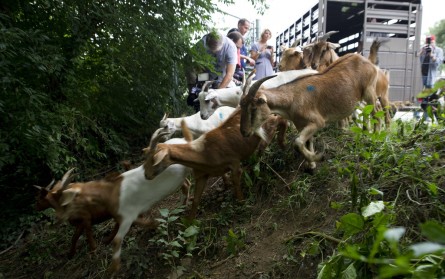 Every so often someone gripes about how appropriate it is to host such things at a cemetery. Pish posh. They're probably the same sticks in the mud who groused about the Brits' recent Twitter ribbing about the 200th anniversary of the burning, "a rather unfortunate event in UK/US relations" as the British Embassy's press people dubbed it. Unfortunate, too, when so many people don't get the joke.

But back to Congressional Cemetery. Amid the beer (Atlas Brew Works and Port City Brewing will be on hand), dog costume contest, raffle drawing for gate prizes and overall bonhomie, it's a decent way to spend a Saturday.

When they stick me in the ground, I hope it's in as lively a place as this.