Updated 11:19 a.m. |  It was an unconditional, unmitigated cave. In the battle to defund President Barack Obama's immigration action , Democrats won. Republicans lost. So why does Speaker John A. Boehner's job look as secure now as it did a month ago? And why aren't conservatives more outraged?

"To be honest with you," Rep. Paul Gosar told CQ Roll Call, "not all of it is his fault." 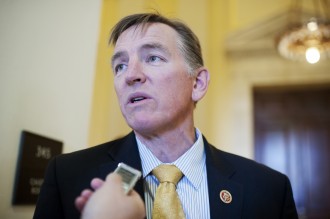 The conservative Arizona Republican, who didn't back Boehner for speaker in January's election, said much of the frustration in GOP circles outside of Washington came because Republicans promised a fight on the Department of Homeland Security once the GOP controlled the Senate.

"Well where's [Senate Majority Leader] Mitch McConnell? Where are our senator friends?" Gosar asked. "I mean, they took a bail on this one as well."

Asked about Boehner's overall performance, Gosar paused, then admitted he has questions. But he noted his staff is scheduled to meet with Boehner's team to discuss a statutory tactic for blocking the executive action on immigration. "I want to send him a lifeline," Gosar said. "If it works, who knows? We'll see what happens."

Conservatives aren't exactly pleased with how leadership has handled the first two months of the 114th Congress. The sudden capitulation on the DHS fight — after months of tough talk — angered many on the right. David Schweikert, R-Ariz., said he was "horribly disappointed, almost heartbroken" that Republicans gave in. Still, even the most conservative elements of the Republican Conference are surprisingly understanding of Boehner's difficult job.

And with the DHS funding fight out of the way, Republicans — some of whom are suddenly attuned to the concept of "governing" — see an opportunity to get stuff done: a budget, Trade Promotion Authority, even changes to Obamacare.

Republicans just need everyone to forget January and February. Please.

"On the record?" he inquired. The Texas Republican said he knew there had been "some unhappiness" with a lack of regular order. But, Weber said he understood Boehner's position.

"He's caught, you know, in a continuum of 247 Republican members — from the most conservative to the least conservative. So that's a hard place to be," he said.

Asked for his perspective on leadership's performance at this point, Virginia's Dave Brat was slightly more candid about his disappointment. "Well," he said, after dramatically slumping his head and taking a short pause, "that's up to you reporters to find out and answer one question."

That question, according to the man who deposed former Majority Leader Eric Cantor in a primary, was whether Republicans truly fought "tooth and nail" (as Boehner had promised) to block Obama's executive action.

"I didn't see any fight," Brat said. "You report on it. Go see if you found the fight. See if you can find it."

Brat said the only fight he saw was one in which an outside GOP group with Boehner ties — Barry Jackson, the speaker's former chief of staff, is a senior board member for American Action Network — was running $400,000 worth of ads against conservatives such as House Freedom Caucus Chairman Jim Jordan of Ohio and Tea Party Caucus Chairman Tim Huelskamp of Kansas.

That bit of news seemed to fire up conservatives almost as much as the DHS bill.

"Again the hypocrisy," Raúl R. Labrador told CQ Roll Call. "They complain about outside groups, but then they're using outside groups to attack conservatives."

The Idaho Republican claimed it was "a dangerous precedent" for moderate Republicans, "and I'm not sure they want to go down this road."

Arizona Rep. Matt Salmon offered a similar warning: "There's an old adage: When you play with fire, you get burned."

Boehner spokesman Michael Steel distanced the speaker from the ads, noting the law forbids members from coordinating with outside groups. "But the speaker does not think these ads are helpful," he said.

Tensions inside the conference were inevitable, given the bumpy first two months that saw leadership forced to pull bills dealing with abortion, border security and education from floor consideration.

"There's a reason very few people raise their hands and ask to be in leadership," said the South Carolina Republican, who heads the Special Committee on Benghazi. "It's much easier where I sit to just second guess what other people do. So I have a tendency to blame the inmates more than the warden." Texas Republican Randy Neugebauer, who isn't part of the most conservative wing of the GOP but has voted against leadership this Congress, said given it's a diverse group, he'd give Boehner "pretty good marks." Even those in the conference who are clearly disappointed thus far are looking ahead.

Jordan told CQ Roll Call the HFC's next focus would be on "doing a good budget." Does that mean conservatives will forget the immigration action?

"No, we're going to keep talking about it," Jordan said. "We hope the court does the right thing. But [we're] just disappointed in the U.S. Senate that they couldn't — Democrats in the Senate — couldn't go to conference."

When CQ Roll Call pointed out it was Senate and House Republicans who ultimately gave in, Jordan refused to attack his own party. "Just remember," he said, Senate Minority Leader "Harry Reid wouldn't let the bill come up."

But if blaming Reid isn't enough for some on the right — if Republican leadership did cave — why aren't conservatives more upset?

For one, the GOP surrender on DHS unfolded exactly the way most predicted. Even conservatives privately conceded the outcome. The only question for GOP leaders was whether a DHS shutdown would be the only thing to placate hard-liners. Boehner was unwilling to go that far, which may vex conservatives — but there's little those Republicans, still seething from last year's "cromnibus" fight that set up the DHS clash, can do.

Two months into a new Congress, Boehner isn't going anywhere. And talk of efforts to steal his gavel is overblown.

Of course, there is chatter of a coup, members and aides told CQ Roll Call on background. But it's not coming from — strictly speaking — GOP conservatives. It's coming from members who believe the party would benefit from a shakeup. The only problem for those members is they're counting on "troublemakers" such as members of the HFC to be the spark that ignites the proverbial powder keg — and, contrary to the belief of many Republicans, HFC members aren't seriously discussing an effort to take down the speaker. (See related story from CQ Weekly at roll.cl/TheRightRecalibrates .)

One HFC member told CQ Roll Call that holding a vote to vacate the chair would probably work in Boehner's favor. Instead of undermining him, it would likely affirm that Boehner, and only Boehner — the man who has held the No. 1 spot in the conference since 2007 — can muster 218 votes for speaker.

Under the current dynamic in the House, there's hardly any positive outcome for conservatives trying to embarrass Boehner. They are more likely to incur the wrath of a speaker many moderates believe has been too forgiving of dissension — embarrassing themselves instead.