Something new, something old. The Smithsonian's Air and Space Museum on the National Mall has both at its newly renovated planetarium.

The Smithsonian's Air and Space Museum has a new toy: a brand spanking new digital projection system for its Einstein Planetarium: an 8K Full Dome Digital System. As part of its soft launch, it's showing off what it can do with showings of "Dark Universe," a 24-minute film narrated by new "Cosmos" host Neil deGrasse Tyson.

That's 8K as in 8,000 pixels, or roughly twice as many pixels as the last-generation digital projection system the planetarium has had in place since 2002. The new system's six digital projectors provide a neck-cranking and high-definition experience, as Tyson's narration of the Carter Emmart flick illuminates the more than 90-percent dark "stuff" the universe is made of.

Smithsonian geoscientist Andrew Johnston gushed about the new system's ability to also customize night sky and our own solar system's orbital idiosyncrasies. Sean O'Brien, the Einstein Planetarium technician who made things go for a Wednesday screening, was able to show what the Earth's artificial satellite ring looks like, as well as the trajectories of Saturn's many moons, for instance.

And then there was the Zeiss Mark 6A projector, the original gangster of the planetarium. Located in the middle of the renovated Einstein theater, the old-school projector is a mechanical nostalgist's delight, a contraption that looks like a combination of a mad scientist's laser, Robby the Robot and Captain Nemo's lifepod. It hums to life like a steam-powered tiger, rising up and projecting a night sky with the best of them. 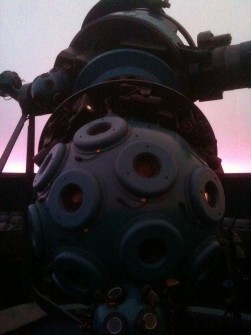 A gift from the government of West Germany in 1976 for the U.S. bicentennial, the projector has been with the museum since it opened in 1976. The planetarium folks break it out a few times a week to show a different view of the night sky. It's old, and most planetariums used versions of it for years, but have since all moved on to digital projection. Thankfully, the Smithsonian has kept its version, if nothing else than as a point of comparison. "It's built like a tank," Johnston said. 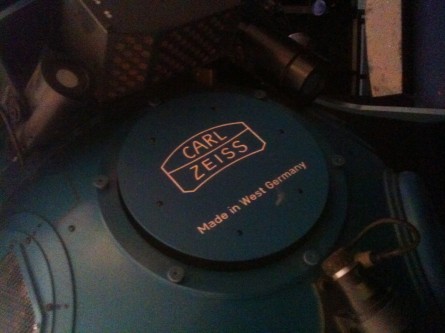 Johnston, whose affection for the Zeiss is obvious, says he frequently seeks out old, retired models for spare parts to make sure Air and Space can continue operating its own. While extolling the virtues of the new system and its abilities, Johnston says the Zeiss does something no digital projector is capable of just yet: "Nothing can get things as dark," as the Zeiss he said.

In addition, it's just kind of cool to have such stuff, especially in a museum. "It's terribly important to keep such equipment," Johnston said.

Ticketed presentations of "Dark Universe" are under way now and run throughout the day. Come for the new toy. Stay for the old one.