Hassan Waits to Choose Her Adventure in New Hampshire

Hassan is Democrats' top pick to run for Senate in New Hampshire in 2016, but the governor is keeping her plans close to her chest. (Bill Clark/CQ Roll Call)

DOVER, N.H. — Gov. Maggie Hassan stands in front of a green screen. To her left, a stick-on motif on the wall prompts her to "Choose Your Adventure Here."

While Hassan is merely exploring one of the exhibits at the New Hampshire Children's Museum during a state Executive Council breakfast in Dover on Aug. 26, it is a timely coincidence as the clocks ticks down for her to decide which statewide office to seek next year.

Hassan must choose whether to go for a third term as chief executive of the Granite State in 2016, or challenge GOP Sen. Kelly Ayotte in a Senate contest that will be crucial to which party controls the chamber .

They say the popular governor would be well-positioned to pick-off Ayotte as Democrats try to net the five seats necessary to ensure Senate control.

At a standing-room-only event last week for Sen. Bernard Sanders at the White Mountain Chalet, an un-airconditioned dusty banquet hall in a small town nestled in the state's picturesque North Country, many Democratic voters echoed that sentiment.

"I think Maggie’s a very popular governor, and that if someone is going to run on the Democratic side against Kelly, she’s the strongest," Gary Newfield, a Democrat from Randolph, said of a Hassan Senate bid.

"Well, I'd hate to lose her as a governor, is the problem," laughed Corry Hughes, a Sanders volunteer from Jefferson. "I think she would do well, she is very popular in the North Country, so certainly I would be happy if she runs. We need somebody to run against Kelly."

Yet just as much as Democrats hope Hassan runs for the Senate, Republicans and GOP-leaning independents who want Ayotte to win are concerned that Hassan could make re-election a challenge for the freshman senator.

"I like [Ayotte], yes I do. But I like [Hassan], too. It's going to be a tough decision," Dolores Brusky, an independent voter from Derry, said Wednesday night before Sen. Marco Rubio held a town hall at the Tupelo Music Hall in Londonderry.

President Barack Obama carried the state twice, making it a prime Democratic pickup opportunity in a presidential year. But without a Democratic candidate, the race is rated Leans Republican contest by the Rothenberg & Gonzales Political Report /Roll Call.

A PPP poll released Aug. 26 showed Ayotte with a one-point lead over Hassan, if the governor got into the race. It was the second time this year PPP’s poll had shown the race in a near dead heat.

Hassan ignored a question from CQ Roll Call about her plans before the executive council breakfast — instead walking over to greet two mounted police officers and their horses.

Her campaign later issued a statement to CQ Roll Call saying the governor is "focused on her efforts to reach a fiscally responsible, bipartisan budget compromise," and that "there is no timetable for any decisions related to 2016."

If the governor has made up her mind on what she's going to do, she hasn't let on — even to high-ranking Democrats in her own party. They say Hassan is focused solely on dealing with a stalemate in the legislature over the state's budget — an impasse that could drag on through the fall.

"I have talked with her a lot and work closely with her, and from all of that I know, her primary focus and attention and mental energy is in how we govern the state well, and that comes first for her," said Colin Van Ostern, an executive councilor from Concord.

As a member of the executive council — a five-member body tasked with approving major business and financial contracts for the state — the 36-year-old Van Ostern is mentioned as a potential gubernatorial or Senate candidate, depending on what Hassan decides to do. Like Hassan, Van Ostern said he is focused on doing his job and not on his 2016 plans.

In the meantime, GOP outside groups have spent more than $2 million on ads in the Senate race, some designed to scare Hassan from waging a run for Senate. Many are critical of Hassan over the budget negotiations, and only recently did Democratic groups go up to counter the ad onslaught .

The longer Hassan waits, the harder it would be for another Democrat to gear up for a statewide bid.

Unlike Hassan — who is familiar statewide and has an established fundraising network — other Granite State Democrats would have a bigger lift to get a statewide operation off the ground. Along with Van Ostern, others who could run in Hassan's stead include Executive Councilor Chris Pappas and Democratic Rep. Ann McLane Kuster.

"To not have a strong candidate already out there talking about the issues, it’s kind of a vacuum," Steve Schmidt, a New Hampshire Democrat, said at the Sanders town hall. "I think everyone is anxious."

In the meantime, Ayotte has more than $4 million in the bank — a total she'll continue to add to as the cycle goes on. 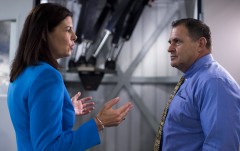 And without an opponent, Ayotte said she has focused on traveling the state over the five-week August recess, visiting businesses and hosting town halls to hear the concerns of the state's voters and job creators.

On Aug. 27, Ayotte had a packed schedule, visiting four companies scattered throughout the Sea Coast region to discuss some of the hurdles businesses faced to create well-paying manufacturing jobs in the state.

In Hampton, a beach community along the state's small stretch of coastline, Ayotte toured Mikrolar — a robotics company that builds robots for companies such as Boeing and agencies such as NASA. She later drove 45 minutes north to Rochester, where she saw how off-road motorbikes were manufactured at Rokon — a company whose bikes have been featured in movies such as "The Expendables 2" and television shows such as "Pawn Stars" and "Swamp People."

She intently listened to the business owners such as Rokon's Tom Blais, who thanked the senator for helping push a reauthorization of the Export-Import bank — the expired bank that Democrats and moderate Republicans hope to re-authorize when Congress returns from the recess.

"I don't have declared opponent, so for me it's just doing my job on behalf of the people I represent," Ayotte said in an interview with CQ Roll Call in the Rokon parking lot, under the shade of a tree on a warm August day.

Ayotte added she's unsure whether she would face Hassan in the race, and demurred when asked whether Hassan would be the toughest opponent she could face.

"I think you just have to be prepared to show people how you represent the state, what you've done for them and how you have their interests in mind," Ayotte said. "And no matter who my opponent is, that's why I think doing my job the best I can to bring the voices of New Hampshire and the people I represent to the Senate, that's really what's going to hold in the end when we get to the election."

Related: Roll Call Race Ratings Map: Ratings for Every House and Senate Race in 2016 Get breaking news alerts and more from Roll Call in your inbox or on your iPhone.