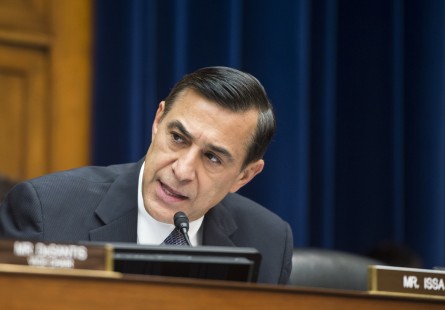 Updated: 10:50 a.m. | Jonathan Gruber, the Obamacare consultant who has become a lightning rod for critics of the health care law for his comments about "the stupidity of the American voter," apologized again on Capitol Hill Tuesday.

The Massachusetts Institute of Technology economist who helped write the Affordable Care Act was summoned to the House Oversight and Government Reform Committee to answer for controversial comments that have surfaced in recent weeks on the Internet.

As the hearing got underway Tuesday, Gruber admitted missteps in talking about the passage of the 2010 law. "Over the past weeks a number of videos have emerged from these appearances. In excerpts of these videos I am shown making a series of glib, thoughtless, and sometimes downright insulting comments. I apologized for the first of these videos earlier. But the ongoing attention paid to these videos has made me realize that a fuller accounting is necessary.

"I would like to begin by apologizing sincerely for the offending comments that I made," he said in an opening statement submitted to the committee.

"Let me be clear. I am extremely frustrated with Dr. Gruber’s statements. They were irresponsible, disrespectful, and did not reflect reality. I was in Congress when this law was debated. And Dr. Gruber does not speak for me or the chairmen of other committees who worked tirelessly on this bill," the Maryland Democrat said.

Cummings said the professor had handed opponents of the health care law a public relations present "wrapped in a bow."

"As far as I can tell, we are here today to beat up on Jonathan Gruber for stupid comments he made over the past few years," he said. "This may be good political theater, but it will not help a single American get health insurance."

The hearing, Issa's last as chairman of a committee that has doggedly questioned the Obama administration's handling of everything from the Benghazi terror attack of 2012, to the ill-fated Fast and Furious gun-running operation to misconduct at the IRS, was followed closely on Capitol Hill.

Democrats dismissed the hearing as just another Republican-orchestrated attack on the Affordable Care Act.

On Twitter, Sen. Barbara Boxer said: "Today's hearing is another attempt ... to divert attention from one simple fact: #Obamacare is working."

Republicans like Rep. Blake Farenthold of Texas, took to Twitter to invite the public to submit questions for Gruber.