Aside from deeply personal anecdotes and some local intrigue, McCaskill shed light on the inner workings of two nationally watched U.S. Senate campaigns and her dealings with other women in politics.

1. McCaskill used more than just ads to prop up Todd Akin: McCaskill’s behind-the-scenes support for Rep. Todd Akin in advance of the 2012 Missouri Republican primary has been well documented. In her book, McCaskill writes that with the $1.7 million her campaign spent in the four weeks before the primary on a dog-whistle campaign to help Akin, she actually spent more than Akin’s campaign did during his entire primary campaign. But, McCaskill’s support ran much deeper than that. When Akin’s campaign swapped out a successful campaign commercial that featured former Arkansas Gov. Mike Huckabee and replaced it with one featuring Akin talking to the camera about “flames of freedom,” his numbers started to dive. 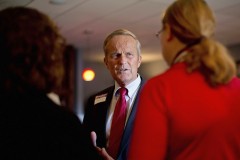 “What were they thinking?” McCaskill wrote. “He’d be in trouble if he didn’t get the Huckabee ad back up.” To get that message to Akin, McCaskill writes that she used a back channel through Michael Kelley, a St. Louis Democratic and labor activist, to get the message to a top Akin campaign official. She was able to put the Akin campaign in touch with her own pollster, Boston-based Tom Kiley, who she allowed “to speak in broad generalities” about his numbers on the ad's success. “Three hours later the Huckabee ad was back up,” McCaskill wrote. When asked by someone else later about her help in the primary and then when she helped keep him stay in the race amid pressure to get out after his infamous “legitimate rape” comment, McCaskill writes that Akin said, “sometimes God uses the devil in his plans.” 2. McCaskill chatted with Obama about not even running for re-election: Before Akin, McCaskill was seen as one of the most vulnerable incumbents in 2012. In the summer of 2011, McCaskill writes that she went to lunch with President Barack Obama at a private dining room in White House where she told him, “I’m thinking about not running.” 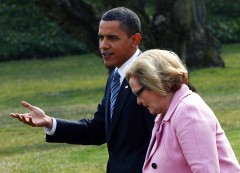 Obama promised not to repeat the mistake he made in 2010. (File Photo by Win McNamee/Getty Images)

Obama, whom McCaskill had endorsed in 2008, talked her out of it, she wrote — adding that the president pledged to avoid the Missouri misstep he made in 2010 while campaigning for Democratic Senate candidate Robin Carnahan in saying, “I need another vote," which Republican Roy Blunt successfully used to paint her as "Rubber-stamp Robin" for the president. Despite Obama’s personal support for her, McCaskill writes that his campaign, through campaign manager Jim Messina, informed her at a meeting of the Senate Democratic Caucus that the Obama campaign would not be spending money on a Missouri ground game in 2012, prompting her to walk out of the meeting, “my eyes welling up, as frustration overwhelmed me.” “I stuck my neck way out, I took huge risks, I have been loyal … and you guys are not going to lift a finger in Missouri,” she writes that she asked Messina. According to her account, he responded, “Claire, can we win in Missouri?” “Point made,” she wrote. 3. Reid, Schumer relentlessly courted her to run in 2005: Just a couple months after McCaskill lost her 2004 election for governor against Republican Matt Blunt, McCaskill writes that she started getting call from Senate Democratic leaders like Harry Reid and Charles E. Schumer. They wanted her to run against Republican Sen. Jim Talent in 2006. 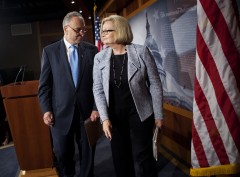 Schumer told McCaskill that she negotiated "like you're from Brooklyn." (File Photo by Brendan Smialowski/Getty Images)

“My first reaction to all the calls? Out of question. No way. Not happening,” she wrote. The Democratic Senatorial Campaign Committee conducted a poll that summer that found McCaskill on top. She writes that her husband, Joseph Shepard, was convinced she should run. By then, Reid himself started calling Shepard to plead his case. McCaskill and her husband went first to the DSCC’s annual retreat in Nantucket, Mass., (where she says Shumer paid her a compliment, “Claire, you negotiate like you’re from Brooklyn") and then to Washington, where they met with then-Sen. Barack Obama. The two were sold. 4. McCaskill has clashed with Ann Wagner before: Rep. Ann Wagner — the Missouri Republican elected in 2012 who is considering a campaign next cycle for McCaskill's seat — has clashed repeatedly with her throughout the last two decades. 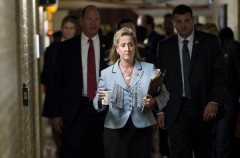 The two crossed paths very publicly in 2000, when Wagner was the chair of the Missouri Republican Party. At the time, she writes, a party spokesman penned a press release in which he said McCaskill let “Democrats parade her around like a cheap hooker” to help the party’s nominee for governor at the time. Wagner, she writes, said the spokesman’s “remark was wrong but that they had no plans to fire him.”

The tables were turned four years later, when it was McCaskill's successful primary election challenge to the state's sitting governor that was controversial, and Wagner used the party's divide to help Matt Blunt get elected governor.

5. McCaskill reveals private meals with women senators: McCaskill praises her female colleagues as the Senate’s top compromisers, and notes that all of them meet regularly for "civility dinners." 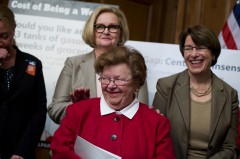 “There is no fancy menu and no long cocktail hour. They’re a chance for us to talk about the issues of the day,” she writes, adding that in that room is where compromises have been discussed on human trafficking legislation, foreign adoption reform and efforts to avoid a government shutdown. The dinners, founded by Sen. Barbara A. Mikulski in 1992, were attended by Hillary Clinton when she was in the Senate. “She was the only one of us who had a Secret Service detail, the only ones who had been first lady of the country, who had traveled places with a much more rarefied atmosphere than even the U.S. Senate. But she never put on airs,” McCaskill wrote. “She was kind and personable, and she was one of us.” While spouses and staff members are not invited to the dinners, McCaskill writes that the women of the Supreme Court are invited to attend once a year.
Related: Roll Call Race Ratings Map: Ratings for Every House and Senate Race in 2016