Posted Oct 17, 2014 5:00 AM
Alexis Levinson
@alexis_levinson
Trade Votes Play Big in 2016 Politics Democrats Search for Candidate Who Can Beat Coffman What Happens If Coffman Says No

Roberts speaks to a reporter in Topeka. (Photo By Tom Williams/CQ Roll Call)

FORT SCOTT, Kan. — Dozens of cows trumpeted in the pens out back as Sen. Pat Roberts made his pitch to attendees at a livestock market.

“When we get a Republican majority, I’ll be chairman of the Senate Agriculture Committee, and we are gonna put the livestock producer first,” Roberts told the crowd from a room behind the then-empty cow pen, where the auctioneer had briefly paused his chant to allow the state's senior senator to address the crowd.

The lone man in a suit jacket in a crowd of denim, plaid, cowboy hats and baseball caps, Roberts kept it short — framing his election in the terms he used throughout his bus tour of the entire Sunflower State.

In the six campaign events Roll Call attended with Roberts last week, this was as close as he came to making the Senate race personal. Most of the time, Roberts’ pitch to voters was that the name on the ballot was all but irrelevant; it was the "R" next to it that mattered. Roberts is the most unlikely endangered incumbent this cycle. The 34-year veteran of Congress – first in the House, then Senate – faces a stiff challenge from independent Greg Orman, a businessman running on a message of disgust for Washington, D.C. and its partisanship.

Roberts’ vulnerability has consequences beyond the borders of Kansas. It endangers the GOP’s hopes of winning the majority, which requires a net gain of six seats in November — a scenario within their grasp. But Republicans would need to find a seventh seat if Roberts were to fall.

The GOP is pulling out the stops to make sure that doesn’t happen, and it’s starting to work. 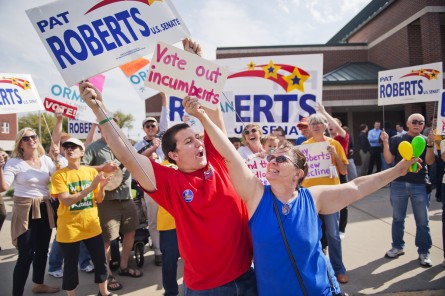 Roberts has a new campaign team, handpicked by the National Republican Senatorial Committee, outside money is pouring in to help him match Orman on the airwaves and a steady stream of surrogates is coming out to help him.

'Yeah, but I know a guy' Under the new regime, Roberts is on a script. He carried a single sheet of paper with large, double-spaced print to a podium Oct. 10 at Republican campaign headquarters in Topeka. During an Oct. 8 debate in Overland Park, he often looked down.

He sticks to two key points at these events and others: Orman is a liberal Democrat, and Roberts is a guaranteed vote for a Republican majority.

It’s also pretty easy to tell when Roberts goes off script. He seems more relaxed and sure of what he’s saying, and he gets more animated. At an event with Texas Sen. Ted Cruz, Roberts went on a riff about regulators fining small businesses, speaking rapidly until he cut himself off.

"I'm getting wound up here, and I'm off message," he declared.

In Pittsburg Oct. 11, hours before the Pittsburg State University Gorillas crushed the Emporia State University Hornets, 45 to 17, Roberts donned a yellow-and-red Gorillas cap and chatted up tailgaters. It was a cold, rainy morning, and few people were out, but Roberts seemed comfortable, wandering through the parking lot hand-in-hand with his wife, Franki. He talked about the Royals’ amazing season, lamented Kansas State University’s loss to Auburn the month before (“I could’ve kicked that field goal!”), romanced a chocolate lab who quickly lost interest when hotdogs appeared and posed for a photograph with a man on stilts.

Off script again, Roberts, who was voted the funniest senator three  times  in a row  through 2008 (he fell to second behind Sen. Al Franken, D-Minn., in 2010 ), started to crack jokes.

“You know a bookie?” asked one tailgater, proposing a bet on the spread of the game. “Don’t answer that.”

“Yeah, but I know a guy,” Roberts deadpanned. 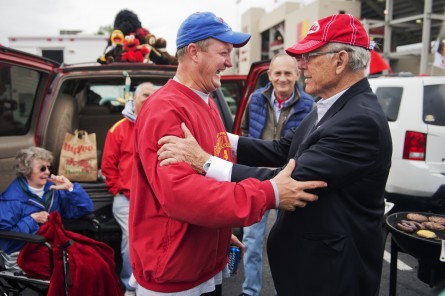 At an Oct. 9 meeting of the Shawnee County Pachyderm Club, when Roberts handed off the podium to fellow Kansas Sen. Jerry Moran after delivering his own speech, he told the NRSC chairman in a voice loud enough for the whole room to hear, “Don’t worry about it. We’re gonna win this race."

That dry humor is probably part of the reason Roberts has a script. During the primary, the senator — who has been dogged by reports that he no longer resides in the state he represents — said during a radio interview, “Every time I get an opponent — I mean, every time I get a chance, I’m home.”

Opponents seized upon that comment as a Freudian slip, furthering the narrative that he was out of touch.

Some Kansas Republicans who know Roberts said they thought he was just making a joke.

The Cavalry Arrives In the weeks before Election Day, a veritable who’s who of the Republican Party has traveled to Kansas. Cruz and Oklahoma Sen. Tom Coburn were there last week; former Govs. Jeb Bush and Sarah Palin have also already made the trip. Rep. Paul D. Ryan and Sen. Rand Paul are scheduled to go in the next few weeks. Then there are the Kansas luminaries: Moran and former Sen. Bob Dole — even conservative Rep. Tim Huelskamp showed up to an event last week.

There’s a bit of revisionist history going on when surrogates try to explain why Roberts is in this position where he needs their help now.

“We had a hard-fought primary here in the state of Kansas,” Cruz declared at an event in Wichita.

Certainly, the primary turned out to be tougher than expected for Roberts, who beat self-proclaimed tea party candidate Milton Wolf by just 7 points. But calling it “hard fought” suggests that at the time, someone in the Roberts camp recognized the necessity of putting up a fight.

It’s no secret that Roberts' campaign was unprepared for how tough his re-election would be. He raised little money, by all accounts put little effort into campaigning and seemed unaware of the trouble he was in. After the Aug. 6 primary, both he and his campaign team seemed to feel they were out of the woods. Then Chad Taylor, the Democratic nominee who had raised little money and was getting even less traction, dropped out of the race to clear the way for Orman.

Suddenly, Roberts had a one-on-one race with a well-funded opponent who was dominating the airwaves while the senator regrouped. 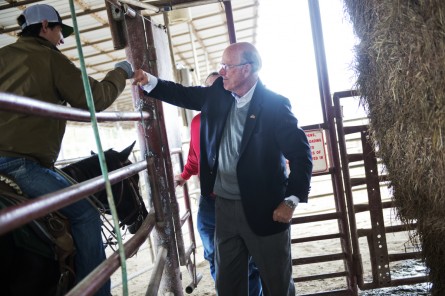 Roberts makes his pitch to the livestock market in Kansas. (Photo By Tom Williams/CQ Roll Call)

Asking why the race is still so close elicits some uncomfortable shifting.

“Do you want to answer this or me?” Moran asked Roberts at a Topeka event. The NRSC has made coordinated expenditures with the Roberts campaign, but no independent expenditures to help him out.

Coburn, standing to the side, stepped in to rescue his colleagues.

“It’s all based on untruth. We have somebody pretending to be something that they’re not,” said Coburn, referring to Orman. Plus, he added, the “tough primary” meant Roberts hadn’t had the funds to answer Orman’s ad barrage.

Speaking to reporters on his own later, Moran explained it as a product of the environment.

“The idea of somebody who is quote, ‘independent ,’ it catches on for a moment. People are fed up with Washington D.C., and only when they begin to see the facts do they realize that what sounded good isn’t what they thought it was,” he said.

The good news for Roberts is that things really do look better. The RNC has invested $500,000 in ground game efforts in Kansas to help Roberts, and outside groups have come to his rescue to make sure he can match Orman ad for ad.

Three of the four most recent public polls have him tied or narrowly ahead of Orman, after two weeks of polls where he trailed by no less than 5 points.

Republicans, say Kansas political observers, are coming back home once they get to know who Orman is.

“I’m pretty excited. What I’ve seen in the last three or four days in particular, hearing from a lot of conservatives as a leading conservative in the state of Kansas, is folks coming home,” Huelskamp told CQ Roll Call after the Oct. 9 event with Cruz. “And you know the polls looked tough ... two weeks ago, but I’ve seen a lot of movement on the ground.”

People, he said, are frustrated and they “don’t know who to blame. But they’ve identified, you know, Pat Roberts is not the problem.”