TUCSON, Ariz. — Operatives couldn't make up a better candidate résumé if they tried: retired Air Force Colonel, first in her class at the U.S. Air War College, the first female fighter pilot in combat who flies the very plane — an A-10 Warthog — that's economically essential to the 2nd District.

At a time when Republicans wrangle with messaging to female voters, this 48-year-old's spunk and articulate bite is made for television — and unlike anything the House GOP Conference has seen in a while.

But can Martha McSally finally win this House seat on her third try, and, more pressing for this Friday evening, can the Republican spell “logomachy”?

“L-O-G-O-M-A-C-H-Y,” McSally enunciates to the judges, who nod in approval at a spelling bee fundraiser just off the Old Pueblo’s newly booming downtown strip. It means an argument about words — something of which there's plenty in her race.

After nearly a dozen rounds, the competition has dwindled from 15 local celebrities and the judges have to regroup because they've run out of pre-selected words to challenge the two finalists. McSally is one of them, and when it's her turn, she walks into the single spotlight on stage and tries to spell “sayonara.”

She blows it. McSally knows what second place is like, and the Ironman athlete in her doesn’t like it. Nearly two years ago, she lost to Rep. Ron Barber, D-Ariz., by less than a point. This cycle, she’s trying again to win one of the most competitive House races in the country — and on paper, it should be her best shot. Polls show a neck-and-neck contest , which is rated a Tossup by the Rothenberg Political Report/Roll Call. The anticipated depressed Democratic turnout in the midterms only boosts her chances.

“This is now the top race in the country,” she tells a couple dozen seniors at a Saturday morning meet-and-greet near the University of Arizona stadium. “We’re in a really good position to win. ... Conditions are much more favorable for us.”

'Outspoken' McSally doesn’t talk like the average congressional candidate, instead dropping phrases like “awesome,” “dorked up,” and “bad-ass airplane” before crowds and in conversations. During a live appearance on Fox News Channel in February 2012, she said she wanted to kick former Sen. Rick Santorum, R-Pa., “in the jimmy" for his position on women serving in combat.

“If elected, she will be a pretty aggressive member from the get-go,” said former Rep. Jim Kolbe, a Republican who once held the district for more than two decades. “She’ll be quite outspoken. She has a reputation for that.” 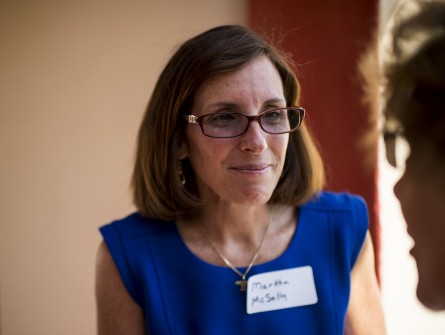 But McSally's pitch is well-practiced and honed, whether she’s doing a campaign breakfast with two dozen silver hairs, or keynoting a conference for the National Association of Women Law Enforcement Executives on the far west side of Tucson. The youngest of five, she left home at age 18 to attend the Air Force Academy, where she found out women couldn't serve as fighter pilots.

“Quite frankly, it pissed me off,” McSally tells hundreds of NAWLEE guests in hotel ballroom. “So I just decided, with purpose in my heart, that I was going to be a fighter pilot.”

Congress repealed the law blocking her progress while she was in pilot training, but the Pentagon didn’t change its policy until nearly a decade later. Eventually, she came to Tucson to fly the A-10 Warthog — the very same “bad-ass airplane” that graces her neckline on a small silver pendant.

The Pentagon now wants to cut the A-10, which would devastate its main training facility at Davis-Monthan Air Force Base, just inside the district's western border. With long-term funding for the aircraft in congressional limbo, Barber has touted his efforts to save the A-10 in his campaign ads , and McSally is always quick to emphasize the plane's significance  to her, both personally and for her would-be constituents.

Thanks to Davis-Monthan, and another base closer to the Mexico border, the 2nd District functions as its own fiefdom. There's eastern Tucson — an offbeat, north-of-the-border college town in the part of the district known as the People's Republic of Pima County. A just renovated street car glides on maiden voyages through downtown, passing a solar-powered pizza shop, a Hippie Gypsy retail store, yoga studios and a more than one renovated classic movie theater.

Here, the member of Congress operates like the district's mayor: Kolbe, one of first openly gay Republicans in Congress, served for decades before he retired and Democrat Gabrielle Giffords succeeded him. After she was shot in the head by a crazed gunman, Giffords resigned. Barber, then her district director, successfully ran to replace Giffords in a special election. McSally lost her bid for that year's special election primary, but ran again for the then-redrawn 2nd District later that year.

“Her background in the military is the best Tucson could ask for to save the A-10," Steve Tofel, a McSally ally and host of a Saturday morning breakfast for her, declared to his patio guests. “She is so smart it’s scary."

In the middle of her speech, one woman whispers loudly for half the crowd to hear, “She’s very articulate.”

McSally also details her eight-year battle to change the law requiring women in the military to wear burkas overseas in countries like Saudi Arabia. She fought what she describes to the crowd as a “dorked up” policy by suing then-Secretary of Defense Donald Rumsfeld.

It's one reason Tofel, a 72-year-old construction company owner, has another descriptor for McSally: "She's a pit bull."

A War Over the Middle On a sunny Tucson morning, next to the playground at Sam Hughes Elementary School, Barber kisses his wife on the cheek and gushes over his two grandchildren in their colorful "Huskies" t-shirts. Fifty Barber boosters have assembled to tout his support within the education sector.

"Gabby Giffords for Congress" sticker lingers on a fold-up chair in the back row. Arthur Martinez, 70, wants to take it home with him.

“I’ve always been a supporter of Gabby,” he says. “Gabby was so great, so he’s got to be great.” 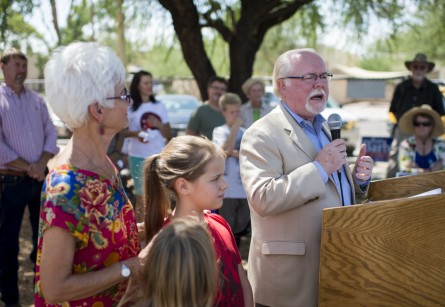 But Barber's success in his quest for a second full term will depend on whether he can tell his own life story in Tucson — not just that of his former boss .

“We were both impressed by his demeanor and down to earth way about him," says Kristen Aflred, an educator with Vail School District, her dimpled son Caleb at her side.

During the press conference, an aide walks around the perimeter, asking supporters to hold their signs up high, conveniently blocking a Republican tracker with a video camera monitoring Barber's every word.

“We expect nasty, low-rent, in-the-gutter politics to come into our city again," Barber says. "That’s the way, unfortunately, politics has gone, too far over the course of years. What we need to do is to send and continue to send, and I will continue to send, a positive message: It’s not what you’re against, it’s what you’re for that should matter to the people of southern Arizona.”

Last cycle, Barber defeated McSally by less than 2,500 votes, while Mitt Romney carried the district by a 2-point margin. As one Republican put it, the key for McSally will be to find “the 2,000 people who voted for Mitt Romney and Ron Barber, and get those folks.”

But when candidates run against each other so many times, the bitterness becomes palpable. Barber doesn't like to use McSally's name, instead referring to her as his "likely opponent." Repeatedly.

“Here’s what you can expect from me: You may not always agree with my votes … but you will always know where I stand," Barber calls out. "And I think that’s what politics and elected officials should be about.”

McSally has no problem calling Barber by his full name, quickly adding on adjectives to deem him a “big-tax, more government, more regulation kind of guy."

The Barber-McSally rematch has become, once again, a race to the middle. Politically, the district is split into thirds between Democrats, Republicans and Independents.

“The people who don’t like Obama are going to vote for McSally, and right now, the president is not that popular," says Steve Linder, a 65-year-old retired teacher at the Barber event.

National Republicans are fully invested in McSally's bid this time , perhaps more so than other top candidates. Her victory would have bigger-picture repercussions for the GOP: If McSally wins, she’ll join the ranks of House GOP women, who are struggling to increase their dwindling numbers.

And McSally would give the Republicans another milestone. Not a single GOP woman in Congress today has served in the military, according to CQ Roll Call research. Only two current female members — both Democrats — have ever served in combat.

But to do all of this, she'll have to win over the same group that national Republicans — and everyone else in the country — wants to woo. In other words: voters like her.

“I consider myself a feminist Republican, and that’s not an oxymoron,” McSally tells CQ Roll Call in an interview over a vegetarian burrito slightly smaller than a bowling pin.Reconsidering her finish in the spelling bee, she adds, "I was really hoping to get the word ‘oxymoron’ last night.”

Related Stories: Shooting in the Rear View, Ron Barber Drives His Own Way On the Road: Arizona This Fall's House Ad Wars Have Officially Started (Video) The 10 Most Vulnerable House Members Freshman Congresswoman Moves to the Middle Roll Call Election Map: Race Ratings for Every Seat Get breaking news alerts and more from Roll Call in your inbox or on your iPhone.