Freshman Congresswoman Moves to the Middle

PHOENIX — Once known for her progressive politics, Rep. Kyrsten Sinema has coasted to the center in her first re-election.

The freshman bills herself as bipartisan, and now party operatives — even Republicans, privately — view her as the safest of the state’s three vulnerable Democrats. But that's also because she's lucky: A brutal Republican primary is bound to leave her future foe broke and bruised 10 weeks before Election Day.

On the campaign trail, Sinema stresses her work across the aisle. It's a political necessity for a member who represents a district President Barack Obama won by just four points.

"I’m working to make it cool to compromise in Congress," Sinema tells 30 mostly baby boomers at a Thursday lunch with the Phoenix West Rotary Club. "I don’t know if we’re quite there yet, but I’m working on it.”

Sinema started her elected career nearly a decade ago at the state House, 10 miles away from this Sheraton conference room.

Some of her first political experience came working for Ralph Nader’s spoiler 2000 presidential bid. She tried her own third party attempt in a losing race for the state House as an independent affiliated with the Green Party two years later. She finally won the seat as a Democrat in 2004. In 2012, Republicans were elated when Sinema won a brutal Democratic primary because they viewed her as the weaker candidate, thanks to her liberal record. They cited some of her comments and positions as "too far out" in television advertisements .

But after arriving in Washington, Sinema joined the Blue Dog Coalition and the bipartisan Problem Solvers Caucus. She boasts about her work with conservative Rep. Dan Benishek, R-Mich., on veterans' legislation. It's a salient issue for Phoenix given its local VA hospital sparked the national scandal .

Sinema tells a story about her first few weeks in Congress, when she attempted to listen to a bill hearing on Capitol Hill closed-circuit television. She couldn't find the feed, so she asked Democratic leadership, who informed her that some bills go straight to the floor for a vote without debate or hearing. They explained that Democrats did the same procedural work-around when they held control of the chamber.

“That is not a good answer," Sinema tells the rotary members. "You don’t eat paste because your neighbor is eating paste.” 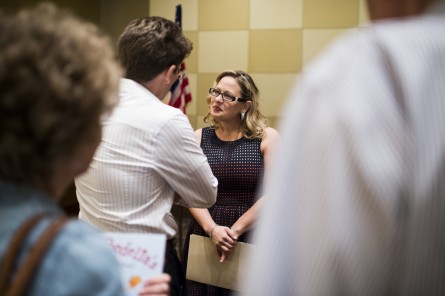 She looks young for her career? Must be her curly hair, she quipped. Tequila tips? She's got them! Good news: Congress passed a budget for the first time in four years! “I mean, it’s Congress," she deadpans.

The 9th District encompasses the eastern part of the Valley of the Sun, surrounding downtown like a backwards "C." This is a newly drawn district, created after redistricting to account for population growth in the sprawling Phoenix area. It includes liberal strongholds she used to represent in the legislature such as Arizona State University in Tempe.

But there’s also ardent GOP territory on the district's east side in places like Mesa, and more moderate Republicans in the Camelback Corridor and Ahwatukee Foothills.

“They’re Republicans who have wine and cheese parties with their gay friends," says a Republican familiar with Phoenix, granted anonymity to speak candidly. "It’s not a culturally conservative district.”

According to March records from Arizona's secretary of state, independents are actually the biggest concentration in the district at 36 percent, followed by 33 percent Republicans and 30 percent Democrats. Or, as Sinema offers later at trendy Giant Coffee in downtown Phoenix, "the remaining 10 people are Democrats." On the table, Sinema keeps spinning her Kate Spade iPhone case with the engraved message, “Eat Cake for Breakfast.”

Privately, Republicans view Walter, now a local businessman, as a slightly better general election candidate, if only because Rogers was criticized for taking an unpopular political position in 1012, when she told a group of local conservatives she would like to see Social Security "phased out" or privatized .

But Walter is green. In a disastrous interview with the Arizona Republic's editorial board last month, the former jock said he wasn't familiar with the details of the bipartisan immigration overhaul bill the Senate passed last year or deportation options for the influx of child migrants from Central America. Neither Republican made themselves available for this story the few days Roll Call was in the district.

Sinema calls Rogers "a very hard worker" but says she's never met Walter. (“I was in law school while he was playing football.”) 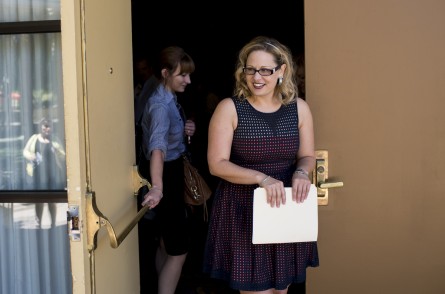 Back at the rotary luncheon, Sinema details her multiple degrees and unusual path to Washington. The former Mormon rose from poverty to get a full scholarship to college and become a social worker at nearby Sunnyslope Elementary School. She doesn't mention that she was Congress' first openly bisexual member.

Asked about her greatest area of improvement in her short time in Congress, Sinema prefers instead to talk about her early missteps as a state lawmaker. “I think the area that I’ve grown the most in is patience," she tells the questioner, head cocked to the side. “When I first got elected to the state House, I was a bit of a firecracker.”

This fall, her greatest challenge will be turnout. Her campaign team estimates Democrats could drop off as much as 6 percent without a presidential race on the ballot. But she also doesn’t face a primary challenge, and her campaign bank account shows it: She reported $1.59 million in cash on hand for the race at the end of June.

“Out of 435 congressional districts in this country, only about 25 are competitive,” Sinema explains to the rotary group. “My district is one of those 25 districts, where a Republican or Democrat could win that election.”

This race is rated Democrat Favored by the Rothenberg Political Report/Roll Call.

Freshman Democrat Rakes in More Than $580,000 Republicans Circulate List of Top Female House Candidates DCCC Reserves $43.5 Million in TV Airtime for Midterms Shooting in the Rear View, Ron Barber Drives His Own Way Roll Call Election Map: Race Ratings for Every Seat Get breaking news alerts and more from Roll Call in your inbox or on your iPhone.