Pot Still Too Hot to Handle for Colorado Politicians

BOULDER, Colo. — Long a flashpoint in the culture wars, marijuana's growing legitimacy hasn't yet turned it into a political weapon, even in the marquee races in the first state to legalize the drug.

In Colorado, the issue has barely gotten a mention as Rep. Cory Gardner takes on Democratic Sen. Mark Udall, and Republican Rep. Mike Coffman faces a challenge from Andrew Romanoff in one of the country's hottest House races.

For now, the lawmakers still seem to find pot too hot to handle as a political weapon. Republicans in the state have shifted how they talk about the matter, but Democrats aren't trying to capitalize on what could potentially become a new wedge issue in their favor this cycle — and in elections to come.

Twenty-three states and the District of Columbia currently have legalized medical marijuana. Only Colorado and Washington have legalized recreational marijuana, but more are expected to vote on whether to change their laws, including Oregon and Alaska in November, as polls have shown surging support for legalization.

Udall, whose race could decide control of the Senate, said marijuana is now simply a business interest in Colorado.

“We are all together in urging the attorney general to let this experiment unfold," Udall said in Greenwood Village, Colo., after an event with Denver business interests.

But he hasn't attacked Gardner's hard-line record on marijuana, something advocates for legalization call a missed opportunity.

“It seems that many elected officials … still haven't come to terms with the fact that marijuana legalization is a mainstream issue that's supported by a growing majority of the public," said Tom Angell, chairman of the Marijuana Majority, a legalization advocacy group. 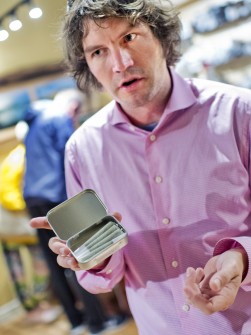 "That Udall's advisers would apparently encourage him to not make political hay of Gardner's essentially encouraging federal officials to arrest his own constituents for following popular state laws amounts to political malpractice,” Angell added.

A Udall campaign spokesman said in an email that the issue "hasn't once come up."

From Angell's point of view, that's the problem. He chalked up Udall's aversion to talking about pot as a generational problem.

"Even though ending prohibition polls better with voters these days than most elected officials themselves do, far too many of them are surrounded by political advisers who cut their teeth in the 1980s and 90s, back when this issue was viewed as marginalized and dangerous," Angell said.

Udall, as a House member, voted against federal interference with state marijuana laws and Gardner has consistently voted in favor, the advocate said.

Gardner was one of just two members of the Colorado delegation to vote in May against an amendment that would prohibit federal enforcement against state-licensed medical marijuana operations.

And last year, Gardner penned a letter to Attorney General Eric H. Holder Jr. ripping him for not continuing to enforce federal marijuana laws in Colorado despite the state referendum.

When asked about his current position, Gardner's campaign pointed to comments he has given that strike a cautious tone.

"I did not support it at the time when it went forward," Gardner has said, according to an email from his campaign. "Right now when people ask me about it, this is what I say: Our Founders intended for states to be laboratories of democracy. Colorado is deep in the heart of the laboratory and I hope that other states will watch and see what happens before they follow and pursue it."

In the House race, Coffman backs the state's right to decide the issue. He also opposed legalization.

“I think as a conservative, constitutionally, Colorado had the right to make the decision,” Coffman said in a nod to the libertarian streak that runs through the state. “This is intrastate commerce.” 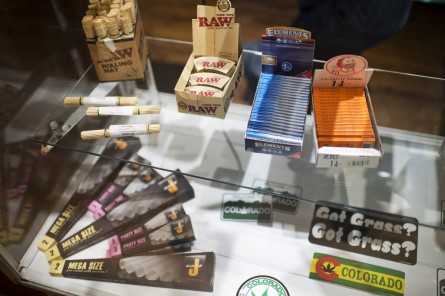 Now that the people have spoken, Coffman said he intends to do his best to represent those interests at the federal level.

"I feel that it’s my duty to go to Washington and go to bat for the people of Colorado," Coffman said after touring the Anschutz Medical Campus at the University of Colorado, Denver.

Romanoff was in accord. "Colorado is engaged in an experiment that the feds should allow to unfold," he said after touring a movie theater in Aurora.

Joe Megyesy, a Colorado native and veteran Republican operative who worked to help pass Amendment 64, predicts politics will eventually catch up to the issue.

"When California legalizes, which we expect will happen … The federal imperative to change [federal law] will become much greater," he said.

The conflict between federal law and state law has led Colorado marijuana interests to seek out help from their representatives in Washington, particularly on access to banks who shun the industry over fear of prosecution.

"Udall's office is very supportive; everyone [including those that don't] even support this issue supports the industry’s ability to bank because they view it as a public safety issue," said Chris Woods, owner of Terrapin Care Station in Boulder, Colo., which serves as many as 1,500 people a day.

On the day CQ Roll Call recently visited the North Boulder location, there was a line out the door of the dispensary, which has the feel of a neighborhood pharmacy.

Woods said he also met with Coffman and has flown to Washington to discuss concerns with Udall's office and the office of Rep. Ed Perlmutter, D-Colo.

Terrapin Care has two dispensaries in Boulder, with one focused on medical marijuana, and two more planned for Aurora. Woods’ business also includes four warehouses to grow his supply.

Woods said his business is part of the National Cannabis Industry Association, which has offices in Denver and Washington, and lobbies for the industry, including banking and tax issues.

Marijuana interests, like the Marijuana Policy Project, have also held fundraisers for politicians, including Udall, Reps. Jared Polis, D-Colo.; Earl Blumenauer, D-Ore and Dana Rohrabacher, R-Calif., all of whom support easing federal marijuana law according to Megyesy, who worked for Coffman and now works for a gay rights foundation.

"A new administration could wipe this all out if they wanted to, and shut it all down both here and in Washington," Megyesy said.

The Colorado Senate race is rated Tilts Democratic , and the 6th District race is rated a Tossup by the Rothenberg Political Report/Roll Call.