Updated Aug. 17, 11:11 a.m. |  Democrats are getting a candidate in Iowa's only tossup congressional election — just not the one they're ready for.

"Congress isn’t working," Mowrer said in a release. "What we need is leadership willing to put Iowa’s middle class before parties and politics – that’s exactly why I’m running and what I’ll do."

If Mowrer's name sounds familiar it's because he ran in 2014  in the 4th District, where despite impressive fundraising he lost to seven-term Rep. Steve King by 23 points.

"I had a good friend who died. That was another reminder of how fleeting life can be and we need to take action to change our world while we have the opportunity to do so," Mowrer told the Des Moines Register  Sunday.

"There's a lot of goodwill toward him for taking on King," one Democrat with extensive knowledge of Iowa politics said. 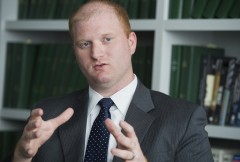 It's just that Democrats think they've got stronger potential candidates who some of them think should have right of first refusal.

"If he were to cool his jets, and let other candidates pass, then I think there’d be a Mowrer movement," one Iowa Democratic operative said.

Meanwhile, Nick Klinefeldt, the U.S. attorney for the Southern District of Iowa, is the "gold standard in terms of a candidate," the first source said.

Earlier this summer Klinefeldt suggested he was not going to run, but some Iowa Democrats are eagerly trying to convince him to get in, especially now that Mowrer is going ahead with his candidacy.

"The door is cracked. It’s not open, but it’s certainly not closed," the Iowa Democratic operative said of Klinefeldt's consideration of the race, adding that his U.S. attorney tenure will soon be coming to a close. With no voting record and a compelling record as a U.S. attorney, Democrats think Klinefeldt paints an easy contrast to Young. A one-time aide to former Sen. Tom Harkin, who recommended him for U.S. attorney, Klinefeldt has close ties to Harkin's inner circle.

If he were to call donors and say, "I'm in," the Iowa Democratic operative said, "those would not be cold calls."

"If I were the [Democratic Congressional Campaign Committee], I’d clone him then run him in a bunch of other places," the same operative added. His future political prospects, the operative said, may be part of what's giving Klinefeldt pause about running.

"He will run for something, and he will be a star. So 'when and where am I going to engage' is what he’s trying to figure out." Although Mowrer was, by all accounts, a formidable candidate in the 4th District last cycle, he only moved into the 3rd District this spring. (He bought a house there in 2007.)

"It was more of a personal decision with my family," Mowrer told CQ Roll Call last week of his district-switching.

Among some Democrats, there's a fear Mowrer might not be able to raise the same kind of money he did in 2014 when he challenged King, a nationally known (and loathed by the left) Republican.

But Mowrer maintains that he has support where he needs it, including at the national level.

"I’ve got a great relationship with folks at the DCCC from my previous experience," he said. "I've always been in touch with them in the last couple years, including recently. I will continue to have that relationship and continue to chat." "I think Young won in a fluke in 2014," Mowrer said, chalking his loss up to the GOP wave. "There are a lot of things that I learned," he said, adding that this cycle, he has an "even better idea of what it takes."

But there's another Democrat in the state who could shake things up. For a long time, it seemed former Gov. Chet Culver, despite alienating parts of the labor community during his tenure, would be the Democrat to beat given his high name recognition and ability to raise money. Three Democratic sources with knowledge of Iowa said that if Culver decided to get in, that could still be the case.

The problem is that Culver hasn't made a move in one direction or the other ("He's gone radio-silent," one Democrat said.), and that's frustrating the party. He wasn't included in a recent DCCC poll of the district that both Klinefeldt and Mowrer were.

"He's squandered his window of opportunity," the same Democrat added.

But "the rules don't apply to him," another Democrat said, suggesting that there's no point at which it'd be too late for Culver to get in and possibly still clear the field.

Democrats have been slow to recruit  in the 3rd District, where both parties consider Young vulnerable. The former chief of staff to Sen. Charles E. Grassley won by more than 10 points last November, but his district went for President Barack Obama by single-digit margins in 2008 and 2012. That's enough to earn him a spot on the National Republican Congressional Committee's Patriot Program  and to get Democrats enthused about picking up his seat in a presidential year.

State Sen. Matt McCoy, whom Democrats had tried to discourage from running, recently announced that he would not launch a bid .

Multiple Democratic sources said the one Democrat who has declared his candidacy , businessman Desmund Adams, is not competitive.

"This is why the DCCC is boxed in," said an Iowa Democrat in reference to the party's delicate recruiting dance. "Mowrer stepping up is a good thing — unless he chases one or two candidates out," he said. Correction 5:40 p.m. An earlier version of this article misspelled Desmund Adams' name.