The Continuing Education of Elton Gallegly

Gallegly walks down the Capitol steps after a series of votes in 2012, his last year in Congress. (Bill Clark/CQ Roll Call File Photo)

A college dropout who learned the hard way that cutting ties with Congress is sometimes easier said than done, former Rep. Elton Gallegly is currently contemplating how to best prepare the next generation of public servants.

“How many people really know what public service is?” the 13-term California Republican, who has since lent his name and lifetime of experience to the eponymous Elton and Janice Gallegly Center for Public Service and Civic Engagement at California Lutheran University , posited Tuesday.

The reliable team player — his support for GOP-backed measures never dipped below 90 percent during his final decade in the House — in 2006 declared that he was ready hang it all up, but was persuaded by Republican leaders from President George W. Bush on down to stick it out for a little longer. He finally said goodbye to Capitol Hill in 2012, returning to Simi Valley, the place where he first cut his teeth in politics as city councilman and mayor.

That 33-year career has evidently been lost on some in the local media, as evidenced by the generic chyron (“Simi Valley resident,” to be exact) an LA Times editor spotted earlier this year when the retired lawmaker appeared in a nightly news report.

If he has been out of sight too long, it’s only because he’s been busy immersing himself in academia.

“I spend a tremendous amount of time at the Reagan Library,” Gallegly told Roll Call, touting the research facility dedicated to the 40th president — which he famously helped scout out alongside the Great Communicator — as “a tremendous repository of everything that happened during that era.”

Just across the way lies the CLU campus, home to the pilot program that has captured Gallegly’s full attention.

“It’s been kind of an intellectual awakening for me … they just approach problems in a different way,” the self-made businessman said of the appreciation he’s gained from this foray into higher education. “It shows that there’s a lot more to public service than meets the eye.”

“We have had three Gallegly Fellows complete the graduate program, which has an emphasis on public service and civic engagement. We have one Gallegly Fellow currently in the program,” she said of the milestones already achieved by the experimental course of study.

The absence of a physical structure has not deterred Gallegly from working to provide students with a sound ideological foundation. He said he is looking into ways to lure those scheduled to appear at the neighboring Ronald Reagan Presidential Foundation and Library over to his turf.

“The whole idea here is synergy. And interest,” Gallegly said of his desire to capitalize on the parade of seasoned politicos that regularly rolls through town.

Calara said attracting distinguished speakers is a top priority, albeit it one that will require serious fundraising to support it. “We’re working on the short- and long-term program,” Gallegly asserted, noting that he has so far held off on reaching out to acquaintances about coming by to say a few words.

When the time does come to dust off his professional Rolodex, it doesn’t sound like Gallegly will have any reservations about reaching out to those he spent so much time with in D.C.

Perhaps the hardest habit to break since vacating #ThisTown, Gallegly suggested, is no longer attending the weekly get-togethers he said his classmates faithfully continued for more than two decades.

Yet leaving, he maintains, was the right thing to do.

“I’ve had no second thoughts about it whatsoever,” he stated.

Once he started reminiscing, Gallegly confessed that he missed hightailing it through airports with Rep. Ken Calvert, R-Calif. (“We traveled together about every week,” he said); finding common ground with Democratic delegation-mate Rep. Howard L. Berman, D-Calif. (“We worked on things together that no one would even think we would ever talk about,” he said of his Foreign Affairs Committee pal); or just paling around with Lamar Smith. 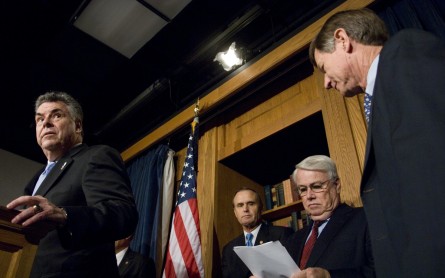 “While it was the greatest experience I can ever envision … I’ve seen too many people get carried out by their boots,” he said, hinting that there are those who clearly overstay their welcome in Washington.

Besides, he’s now got his hands full with another brand of organized chaos.

“I don’t miss not having the chance to be with my grandkids,” Gallegly quipped.