Updated 7 p.m. | Just days from a shutdown, Senate Majority Leader Mitch McConnell has begun to pivot toward a new strategy to separate funding for the Department of Homeland Security from the GOP's plan to roll back President Barack Obama's immigration actions.

The Kentucky Republican offered a standalone bill focused on the 2014 immigration actions alone after Democrats for the fourth time filibustered the House-passed DHS bill, this time on a 47-46 vote, 13 shy of the 60 needed to advance.

"It isn’t tied to DHS funding. It removes their excuse," the Kentucky Republican said on the Senate floor. “This is our colleagues’ chance to do exactly what they led their constituents to believe they’d do: defend the rule of law, without more excuses."

Sen. Susan Collins, R-Maine, who had pushed a strategy of only targeting the most recent actions as part of the Homeland Security Department funding debate, said Monday that last week's court ruling in Texas could provide the opening for avoiding a shutdown. 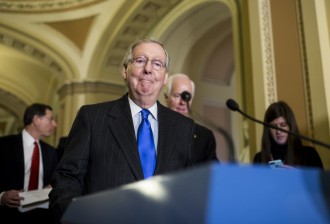 "I hope that now that the court has ruled that perhaps one way would be to have a clean DHS funding bill and a resolution that puts the Senate in support of the court's ruling," Collins said. "I've always thought the judicial system was an alternative way to deal with the president's overreach last November, and now that one court has ruled to put a stay on his executive order, perhaps that frees us to go forward and get the department fully funded."

"This vote will highlight the irresponsible hypocrisy of any Senate Democrat who claims to oppose President Obama’s executive overreach on immigration, but refuses to vote to stop it.  If we are going to work together on the American peoples priorities, Washington Democrats must be honest with the people they represent," Steel said in a statement.

McConnell's maneuver comes as he faces pressure from both sides of his party to act to break the logjam.

Moderates like Sen. Kelly Ayotte of New Hampshire and Mark S. Kirk of Illinois, both of whom are up in 2016, want to avoid a shutdown showdown over the immigration issue.

Ayotte suggested filing an amicus brief with a Texas court considering a challenge by 26 states — something some of her colleagues have already done.

"There's certainly a strategy there that we could file an amicus brief to that, through the court system like we did in the NLRB case where the president's actions were found unconstitutional, and I would support that," Ayotte said, while also expressing support for a vote on disapproving of Obama's executive actions.

But a conservative senator, Richard C. Shelby of Alabama, suggested instead that Republicans do away with the filibuster entirely.

Democrats have "broken the eggs now. My point of view: We should go ahead and break some more eggs," he said.

The filibuster "is just rule. It's not a law."