Posted Jul 17, 2014 5:00 AM
Alexis Levinson
@alexis_levinson
Trade Votes Play Big in 2016 Politics Democrats Search for Candidate Who Can Beat Coffman What Happens If Coffman Says No 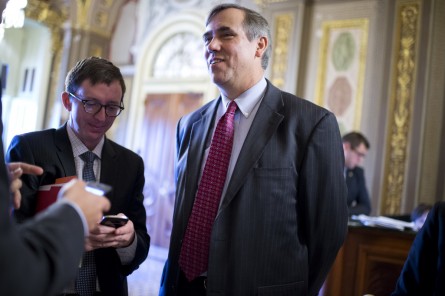 Oregon Republican Monica Wehby will report raising more than $955,000 in her bid for Senate in the second quarter, according to fundraising figures provided first to CQ Roll Call.

Wehby, a pediatric neurosurgeon, is challenging incumbent Democratic Sen. Jeff Merkley. She raised most of that haul — $846,000 — since May 1. Her campaign had $647,000 cash on hand at the close of the most recent reporting period, which runs from April 1 through June 30. The campaign will report $122,000 in debt.

Merkley is favored to win in the Democratic leaning state, but Republicans hope that Wehby's credentials as a doctor will help put the seat in play in a year when the president's healthcare law is very unpopular. The issue could have more resonance in Oregon, which abandoned its state-run healthcare exchange earlier this year as its disastrous website never functioned.

The race is rated Democrat Favored by the Rothenberg Political Report/Roll Call.

Related Stories: Roll Call Election Map: Race Ratings for Every Seat Rating Change: Oregon Senate Always Be Nice to the Person Who Answers the Phones: Oregon Senate Edition Monica Wehby Wins GOP Senate Primary in Oregon Get breaking news alerts and more from Roll Call in your inbox or on your iPhone.