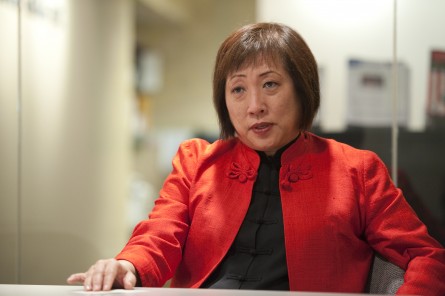 Hanabusa's argued that the election should be postponed due to storm damage. (Douglas Graham/CQ Roll Call file photo)

Hanabusa filed a lawsuit Wednesday asking that special extended voting hours in two precincts on the Big Island be pushed back further. The make-up date was scheduled by the state Office of Elections after a hurricane shut down the precincts' polling places Aug. 9, when the rest of the state voted.

Currently the primary race is too close to call, with Hanabusa trailing Sen. Brian Schatz by 1,635 votes. The remaining precincts will decide the outcome.

Hawaii News Now and other outlets reported the news of the Circuit Judge Greg Nakamura's ruling Thursday. Hanabusa argued that voters needed more time to recover from the storm before they could think about heading to the polls. The judge's decision also means less time for Hanabusa to pursue votes in her only opportunity to catch Schatz.

The Hanabusa campaign said it was disappointed by the decision but promised to press on with its get-out-the-vote efforts.

"We will continue to distribute food, water, fruit and ice to those in need but we need people to be aware that there is an election tomorrow," Hanabusa spokesman Peter Boylan said. "We are canvassing the precincts and will provide rides to anyone who needs a lift to Keonepoko Elementary School. This campaign is not over and we will continue to work very hard to earn every vote.”

The Schatz campaign stuck to recovery efforts in its response.

"Senator Schatz continues to focus his energies on helping the people of Puna to recover, and that's what he will do on an ongoing basis," Schatz campaign manager Clay Schroers said in a statement on the ruling. "His commitment to recovery in Puna extends beyond the election.”