Posted Mar 10, 2015 9:33 AM
Alexis Levinson
@alexis_levinson
Trade Votes Play Big in 2016 Politics Democrats Search for Candidate Who Can Beat Coffman What Happens If Coffman Says No

Rep. Donna Edwards, D-Md., made her Senate bid official on Tuesday, announcing her intention to run in a web video.

"I'm announcing my candidacy for the United States Senate," she says in the autobiographical video. The 5-term congresswoman narrates the just over 2-minute long video, which shows Maryland's National Harbor in the background. 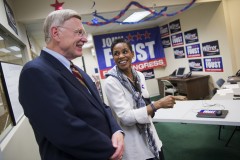 They will not have the Democratic field to themselves: A number of politicians are considering bids, including four of the other Democratic House members, and a huge number of state elected officials. Anyone serving locally would have a free shot at the seat, as they are not up for re-election to their current posts until 2018.

"The corporate interests are gonna come at me with all their money," Edwards says in her video. "But if you'll join me int his fight there's no way we can't win. and when I step into Barbara Mikulski's shoes as your next Senator, you'll always know where I stand — with you.

Edwards' decision also marks the start of another busy Democratic primary in Maryland — for her House seat.