PITTSBORO, N.C. — The local color guard marched through Horton Middle School's small all purpose room, pausing in front of the stage for a rousing rendition of "America the Beautiful."

And then, quietly, Heidi Cruz slipped into the back of the room. Later that day, her husband, Texas Sen. Ted Cruz would go on to win the Conservative Political Action Conference's Straw Poll and the GOP presidential nominating contests in Kansas and Maine.

While the audience of about 50 Chatham County Republicans sat through dry remarks about the confusion over North Carolina's congressional districts, Cruz worked the back of the room. Standing in front of a table of sticky pastries and bottled orange juice, she whispered with the few voters who came up to her, eventually landing at the Cruz campaign table. His was the only presidential campaign with an organized presence at the Chatham County GOP Convention, held in this 4,000-population town about an hour west of Raleigh.

"This state shares his values, so our job is to get the message out," Cruz told Roll Call.  “We’re in the state a lot these days. This trip has been two days, and we’re coming back in a number of days." North Carolina's presidential primary is March 15. 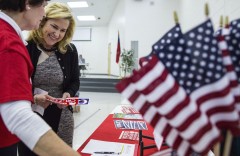 Cruz's path to victory was supposed to run through the evangelical South, but his third-place showing in South Carolina on Feb. 20 foreshadowed a disappointing finish in the March 1 "SEC" states. He won just three of the Super Tuesday states, none of which were in the Southeast and one of them his home state of Texas.

"I have faith that the evangelical community will have the fortitude and the strength of mind to evaluate the record of the candidates," Heidi Cruz said Saturday. Cruz chalked Trump's success up to Americans' anger toward government, but she said her husband had tapped into that five years ago. "He started a movement," Cruz said. "And that’s what swept Ted into office in Texas, and it’s why he won Texas with 17 points. We beat the front-runner in this race by 17 points on Tuesday!" Cruz whispered emphatically as local GOP officials addressed the audience in the front of the room. "Those are the people who know Ted best. This state will get that message," she said of North Carolina. What separates Cruz from Trump, Heidi Cruz said, isn't just that her husband was first to the voters-are-angry movement. Trump voters "are willing to go with someone who speaks to our lesser selves," she said. And yet, he  knows a thing or two about using incivility to curry favor with voters. "He may the least liked person in all of Washington," she said in one of her biggest applause lines Saturday.

Cruz’s successes later in the day validated Heidi Cruz's working to shore up the campaign’s strength with grassroots conservatives.

After mocking Trump at CPAC on Friday, Cruz walked away with 40 percent of the vote in the conference's straw poll Saturday afternoon. Trump earned 15 percent of the vote. The GOP frontrunner was noticeably absent from the conservative confab just outside of Washington. Other elected Republicans largely avoided talking about the front-runner and he cancelled his Saturday morning speech for a last-minute Kansas rally.

That decision didn't pay off for Trump. Cruz won 48 percent of the vote there — double Trump's total — and later in the evening, Cruz won Maine with 46 percent of the vote. His victories may not be enough to cut into Trump's delegate lead, but it's clear Cruz will put up a fight in the winner-take-all states on March 15.

Cruz Mocks Absent Trump in CPAC Speech
The Elephant on the CPAC Stage
What We Learned from Thursday's Debate
Roll Call Race Ratings Map: Ratings for Every House and Senate Race in 2016