Save for later
Pope Visit Comes During Tumultuous Time for Capitol Police
Hannah Hess
Posted at Sep 22, 2015 5:00 AM

Capitol Police is just one of the scores of agencies coordinating a massive security strategy for Pope Francis' visit to U.S. soil, but its approximately 1,700 sworn officers and 300 civilian staff will be key to keeping the pontiff and the public safe during the pope's Thursday speech to a joint meeting of Congress.

Members say they are confident in security officials, but the department has been plagued by personnel issues and infighting while planning for the papal visit. On the day federal and local District of Columbia officials convened  to address concerns about security and transit during the pontiff's visit, likening it to an inauguration, Capitol Police union officials ramped up their efforts to undermine outgoing Chief Kim C. Dine, who plans to retire in January.

Save for later
Roads Around Capitol to Close for Pope's Visit
Bridget Bowman
Posted at Sep 14, 2015 5:21 PM

The U.S. Capitol Police has announced a series of street closures and security notices in anticipation of Pope Francis' visit to the nation's capital next week.

According to a Monday news release, closures include all streets within a three-block radius of the Capitol and will begin at midnight on Sept. 24 and end at noon, once Pope Francis has the left Capitol grounds after addressing a joint meeting of Congress. The closure area is bound by D Street to the north; Washington Avenue and D Street to the south; Third Street to the west; and Second Street to the east. 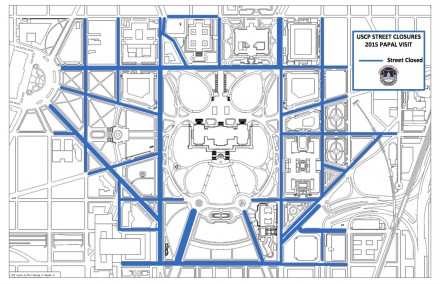 Capitol Police emphasized there will be no public viewing areas to watch the pope's address on the Capitol grounds. Those gathering on the West Front, in the chamber or watching a telecast in a House and Senate office building will be required to show their tickets and submit to a security screening to enter the grounds. A number of items are prohibited from the grounds that day, including selfie sticks, umbrellas, strollers, bikes, thermoses, coolers, drones, weapons and explosives.

The material found in the House chamber that prompted its closing Monday has tested negative for asbestos.

"The [Architect of the Capitol] has completed the investigation of the material found behind the existing wall fabric in the House Chamber. All tests were negative," House Sergeant-at-Arms Paul D. Irving said in notice sent late Monday afternoon. Irving said the chamber would reopen to visitors Tuesday. The Capitol Visitor Center stopped issuing House gallery passes after the chamber closed Monday afternoon.

Behind wall fabric, workers found an unknown material that is being tested for asbestos. The chamber was closed "in an abundance of caution," House Sergeant-at-Arms Paul D. Irving said in a brief memo. Testing can take up to eight hours. The material was not airborne, according to a Capitol official. The discovery is not unusual for the type of renovation work or the age of the chamber, which was first used in December 1857.

Gunnery Sgt. Peter James Boby pleaded not guilty Wednesday to three misdemeanor charges in D.C. Superior Court. His wrists and ankles were shackled during the brief arraignment. Boby, who wore a plaid shirt and jeans, was released from custody on his personal recognizance around 3 p.m. He told CQ Roll Call he had no comment on the case. Court documents state that Boby approached a Capitol Police barricade on C Street SW at approximately 2:07 p.m. Tuesday, in a blue sedan with North Carolina plates. An officer noticed a "green metal military style ammunition box" in the trunk, according to court documents that provide a detailed account of the arrest, and discovered a handgun inside the box.

Save for later
Capitol Police Board Aims to Replace Chief Quickly
Hannah Hess
Posted at Aug 5, 2015 5:00 AM

Two former Secret Service agents and an architect walk into a board room. They're charged with finding a replacement, and soon, for outgoing Capitol Police Chief Kim C. Dine.

They have a lot of work to do, with Dine retiring in January but coordinating security for Pope Francis' visit to the United States , particularly the pontiff's Sept. 24 address to a joint meeting of Congress and for the hundreds of thousands, perhaps more, expected on the West Front and National Mall for the papal visit.

Save for later
Capitol Police Chief to Retire in January
Hannah Hess
Posted at Aug 3, 2015 6:23 PM

Dine’s retirement plans were announced to department employees Monday in an internal email. The move follows a 90-day period of intense scrutiny from the Capitol Police Board. In April, the chief submitted a resignation letter to Senate Sergeant-at-Arms Frank J. Larkin, House Sergeant-at-Arms Paul D. Irving and Architect of the Capitol Stephen T. Ayers. Many officers thought the chief was headed for the exits. Instead, Assistant Chief Daniel B. Malloy  abruptly retired, and a veteran deputy chief stepped into the No. 2 spot. It is unclear if Assistant Chief Matt Verderosa, who has had a 30-year career in federal law enforcement, will take over as acting chief.

As a matter of policy, members of Congress usually refrain from commenting on personnel issues related to the force of 1,775 officers sworn to protect them. But when it comes to fallout for bodyguards who protect top GOP leaders leaving their guns in publicly accessible bathrooms , some lawmakers are criticizing Capitol Police's top brass.

"We need to do everything we can to protect whistleblowers," said House Oversight and Government Reform Jason Chaffetz, R-Utah., reacting to CQ Roll Call's report that Capitol Police have suspended a sergeant in the Capitol division, allegedly in retribution for a suspected leak. "All we want is for truth to surface and there should be no repercussions for somebody coming and informing Congress about what really happened — especially if they think there was a problem," Chaffetz said.

The Vatican on Tuesday released Pope Francis' schedule for his September visit to the United States, where he will spend five days and address a joint meeting of Congress on Sept. 24.

“It is with humility and deep gratitude that we will welcome His Holiness Pope Francis to the U.S. Capitol in September for a Joint Meeting of Congress," Speaker John A. Boehner, R-Ohio, said in a statement. "His visit to the U.S. Capitol is unprecedented, and it is with open ears and hearts that we will welcome his address to the Congress." In March 2014, Boehner invited the pontiff to address Congress, and the Vatican officially accepted the invitation in February 2015. House Minority Leader Nancy Pelosi, D-Calif., also welcomed his visit, noting in a Tuesday statement, "Ever since his inauguration in 2013, Pope Francis has renewed the faith of Catholics worldwide and inspired a new generation of people, regardless of religious affiliation, to be instruments of God’s peace."

In the wake of mass shootings in Charleston, S.C., Washington murmured about resurrecting failed firearm control legislation , yet the House's Second Amendment defenders stuck to their guns about a push to further dismantle local weapons laws in the District of Columbia.

"Even though we have a lot of folks on this issue that speak emotionally, we have really good data sets from at least our state that show from experience," said Rep. David Schweikert, an Arizona Republican who endorsed a bill supporters say would take away the D.C. Council's ability to enact gun control measures. Accidental discharge and gun crime are down "substantially," Schweikert said, since his state enacted some of the most lenient gun laws in the nation.